Have you ever wished you could get married in the summer sun wearing shorts, a T-shirt and holding a beer? If so, you can now envy newly married couple Hilary Spires and Andy Cunard, who tied the knot inside the Tsawwassen Sun Festival beer garden on Sunday.
0
Aug 8, 2018 1:36 PM By: Ian Jacques

Have you ever wished you could get married in the summer sun wearing shorts, a T-shirt and holding a beer? If so, you can now envy newly married couple Hilary Spires and Andy Cunard, who tied the knot inside the Tsawwassen Sun Festival beer garden on Sunday in front of friends, family and complete strangers. 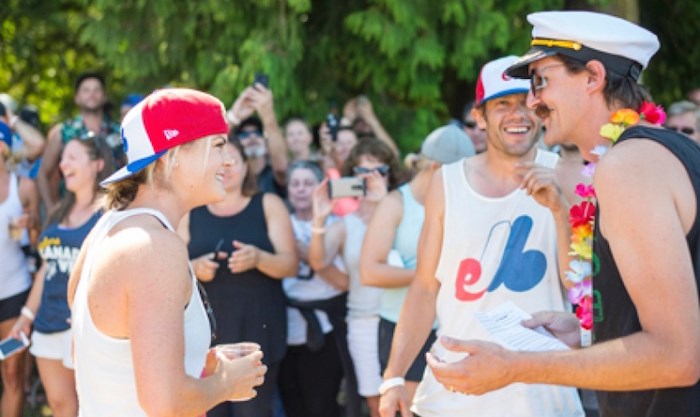 Hilary Spires and Andy Cunard, tied the knot inside the Tsawwassen Sun Festival beer garden on Sunday. The couple were married by friend Alex Elsey. Photograph By ADRIAN MCNAIR

Cunard and Spires, softball teammates during the annual Sun Festival tournament, became teammates in life after a short ceremony. The couple were married by friend Alex Elsey, who received his license to marry the two by ordering it from the Universal Life Church on-line.

“We met about four years ago. Andy came and started playing on our team and the rest is history,” said Spires. “I guess because we met playing softball it just seemed the right thing to do. Sun Fest weekend is like the World Series of slo-pitch for Tsawwassen…we call it our Christmas…it is the best time for us. After the first season it all started for us in the Sun Fest beer garden where we started to get to know each other. We got engaged a year ago on that weekend, so we just figured why not get married. All our friends are there and as Andy said it’s catered!”

Spires said it also afforded the couple a no fuss, no stress affair.

“I didn’t have to worry about my mom wanting to invite her friends or someone wanting a plus one. This way anyone who wanted to come they could - all they needed was ID,” she said. “I just think weddings are kind of silly, but this was awesome – it was so much fun.”

The couple wore their game worn jerseys covered in sweat and dirt that they had worn on Saturday.

“We had won both games and we were both hitting well, so you can’t wash your uniforms, so why not wear them,” she said.

And their team the Expos won the tournament to boot.

“That was priority number one,” she said. “It was the best weekend.”

Slo-pitch tournament coordinator Judy Kirk said the beer garden wedding was a first for the tournament.

“I didn’t really know Hilary and Andy because I usually deal with the team reps,” said Kirk. “I get this request from the team about the wedding. I took it to the committee because it was such an unusual request. When they explained that they had met at the tournament, you understand it when you know the story behind it.”

- With files from Adrian McNair