The tenth annual edition of the New Forms Festival kicks off this Friday, Sep. 10 at the W2 Storyeum as the SWARM after party, with an attractively priced admission fee (FREE) and with a gang load of our finest electronic bands (Basketball, No Gold, Love Dancing, Babe Rainbow, Resorts). It also obviously hits the decade mark for this festival. 10 years, yeah, you can definately say that New Forms have held it down for heads on the hunt for the next. As a volunteer for the festival in 2003, it was one of my early ventures to connecting to stuff in the city that I had always read about and been interested in but never actually hooked up with.

Getting involved with Discorder mag only after I had graduated from UBC, I met Rob Willis as 2 of the guys interested in the hip hop and electronic end of things at the paper. Rob then told me about another magazine he was involved with that I might be interested in writing for, Capital Magazine, and I did. He also told about about another thing the crew from Capital were doing and it was this festival. I'm pretty stoked to see them hit the decade mark this year. Below, I talk to co-founder, past artistic director and this year's festival exhibition curator, as well as curator of the CODE live series during the Olympics, Malcolm Levy about ten years behind the festival, how he has seen the scenes grow in the city and what's up for the next! 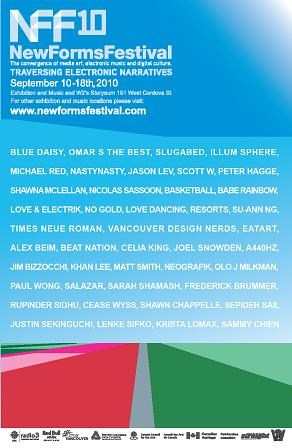 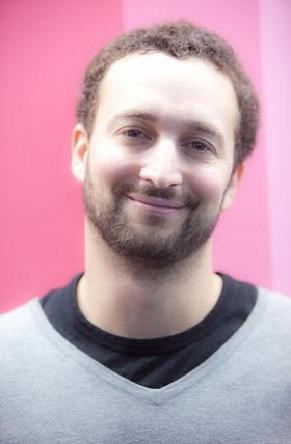 What other major feelings are running thru your mind as the 10th festival is about to go?

A: Ten years is an incredible feeling of accomplishment. I can't tell you how many times along the way I wasn't sure if the festival would make it this far. Its been amazing to see it continue to grow over all these years. I think the major feelings running through my mind at this point are around the community of artists, curators, board members, volunteers and staff that have been involved since the beginning.

Vancouver has an incredible community of people within the arts scene, and in New Forms, there have been an exceptional amount of people who have been involved over the years. Also how much the festival has grown: in our first year we had a few hundred people for the entire festival, and it was considered an incredible success. This year we are expecting at least 3 thousand people to attend the festival, and it continues to grow all the time. Artistically it has been wild to see the city's art scene continue to grow, and the multiplicity of disciplines of artists that are seen as media artists in one form or another is wonderful.

As a curator, artist, writer and film maker, I have seen the festival through the lens of my camera, through constant interviews and write-ups, and of course through the conceptualization of the festival year after year. What is amazing is that in its tenth year it doesn't feel old, in the sense that there are already ideas percolating for many more years of New Forms.

A: I think the two main goals that NFF has set to maintain is artistic integrity and support of the community. NFF has always sought to expose new forms of art and music, and at the same time we have worked to always include local artists within the growth of the festival. Over time our curatorial structure and focus has changed. We have constantly pushed an evolution of musical and art forms within the festival, and one can see the change within this.

Over the years we have exposed art forms including sound art, net art, robotics, video art, photography, graffiti, interactive art, light based projections, slides, visuals... the list goes on. Musically it has been the same going everywhere from ambient electronica to techno, dubstep, glitch hop, hip hop, indie rock, live performance and everything else in between.

The evolution is often with what people are doing with computers and synthesizers. Often the sounds are converging amongst these genres today, as one can see in some of the nights, especially September 11th at W2 Storyeum, which features Slugabed, Blue Daisy and Illum Sphere amongst others. It is basically a meeting point of dubstep, hip hop, even techno sounds. Sort of like Flying Lotus meeting up with Kode 9 and Hudson Mohawke in a bar and deciding to make music..... I think the one thing to mention is that hybridity has taken us over both in art and music. We live in a hybrid time, and what is being created out of that is fantastic.

Q: What are the biggest changes you have seen amongst the community in Vancouver with regards to the relevant music and art scenes from ten years ago?

A: The Vancouver music and arts scenes continue to grow and have become prolific both locally and internationally as well. It is amazing to see the recognition local artists are getting in a number of musical and artistic genres....It's all part of a greater story in my opinion. Also a lot of local festivals have grown over the years as well, and within New Forms, what we have seen is an amazing community growing in and around the festival.

As all the aspects around new forms such as technology, social media and electronics become more ubiquitous within our everyday lives the response in terms of more attendance at NFF is wild to see. I think that this is very much how things flow in this day and age. The community in Vancouver is growing all the time and reaching out in many ways. Its great to see.

Q: Believe you were behind the CODE event series during the Olympics?

How was that whole experience and what things did you take away from it for future events?

A: The CODE Live Event series was really a wild experience. Having the opportunity to curate over 40 installations and 8 music nights for a world audience was really amazing. We worked quite hard to represent the local community within this, and the responses we got back really reflected this. The majority of nights were sold out and the exhibition had over 40,000 people through its myriad of locations.

You learn a lot when you are curating for an international audience, which isn't necessarily there for the art. Bringing in international artists in new media of the calibre that I was able too also gave the local community the chance to enjoy a media arts festival different than they had in the past. It was like curating Ars Electronica in Vancouver.

Also, there were people such as Rae Hull (Creative Director of CODE) and Robert Kerr (Executive Director of the Cultural Olympiad) whose expertise was amazing to learn from. Their wisdom throughout the experience is something that I hope to remember through the next stages of my practice.

Q: What happened to Capital magazine?

How much of running that relates to running NFF?

A: Capital Magazine! Man you are going back a bit here... (I still have all the issues framed in my office at Open Studios). Capital is definitely part of the overall ideology that spawned New Forms. It was an arts and culture magazine both in print and online. We were based in Vancouver but had writers all over the world. Jarrett Martineau was also a founder of Capital in the same way as New Forms. Capital Mag started in 1999/2000 and had a 5 year run. At that time it was tough to get any funding around magazines, and after some long struggles with that we had to eventually wrap things up.

Capital talked about art, music, fashion, culture in general, and was one of the most informative experiences of my life. Any time you have the chance to ingest all of that culture its incredible. People talk about Capital all the time, its like this thing that in a way carries on....I was in New York last month and one of our old writers said she found a couple old issues when moving and put them away for safekeeping.. Then the group of us went into a 30 minute dialogue around the state of art and journalism today. In 2000 we probably had three hundred sites linked and were trying to cover the culture world as far away as Krakow and Tokyo, go figure....what an experience.

Q: What next big thing do you think or hope will take off in the music scene in Vancouver?

A: Great question. I think hybridity is going to continue to take over the music and art scenes in Vancouver. More collaborations, more mixing of sounds, more acceptance of different genres by different people outside of those specific disciplines. HYBRID art in all forms is going to define Vancouver into the next five years! We are small enough that a lot of people know each other, but large enough to make an impact. Vancouver is a fertile land for creation of art and music, and look for this to continue and take off.

Just like the Vancouver School is known in the Art World, musically this is starting to happen as well. I think that there will be larger public gatherings in the city for music and art, and the city is really starting to support this more and more. The community will keep on growing, and we will start to see new art areas created in the same way this has happened in New York, Berlin, and Beijing to name a few. Vancouver is young and growing by the day. People come here from all over the world because of the creativity here, the unreal landscape, and the people....Look for this to continue to grow and explode over the next few years!