As exhausting as it sounds, Brooke Spence hiked the Grouse Grind 17 times on June 21, setting a new one-day record.

“By Grind No. 7 I started to have gels and sport chews, chips, Coke and M&M’s,” says the North Vancouver athlete, listing her fuel sources. “By Grind No. 13 it was a struggle to eat anything as I was really nauseated. My support crew really had to force me to eat.”

Brooke Spence gets set to head up the Grind again on June 21. Spence set a new record, after tackling the gruelling hike 17 times in one day. (Photo courtesy Grouse Mountain)

Spence was one of 63 participants who tested their mettle on Mother Nature’s Stairmaster for a good cause during the Multi-Grouse Grind Challenge. From dawn to dusk, the hikers pushed themselves up the Grind – again and again and again.

With her 17 breathtaking ascents, Spence set a new female record and is now also tied for the most number of Grinds in one day. This year’s top male finisher was Andrew Hanlon with 15 Grouse Grinds completed over the 20-hour period.

With the Grind only recently opening after a month of maintenance, Spence says she did most of her training on the BCMC, which parallels the Grind for the most part.

After eating a breakfast of oatmeal, a hardboiled egg, an orange and, of course coffee, she says, Spence started her first Grind at 4 a.m. on the day of the challenge. Her best Grind time of the day was 42:24, while her best ever is 32:28.

Spence listened to the radio and a couple of podcasts to help push through the fatigue. Some friends kept Spence company by hiking 11 out of the 17 Grinds with her.

“As the day went on, the encouragement just got more and more,” says Spence. “I even had someone give me their spot on the tram as it had filled up.”

Despite being “tired, stiff, a bit sore and very hungry,” Spence says she felt surprisingly good at 10 p.m. after all those Grinds.

“Unlike running, there’s no pounding, so my body actually feels better than it has after marathons or ultra-marathons,” she explains.

Billed as the only sanctioned event to determine the record-holder for most ascents of the Grouse Grind in a one-day period, this year’s event raised more than $34,000 in support of the BC Children’s Hospital Foundation. 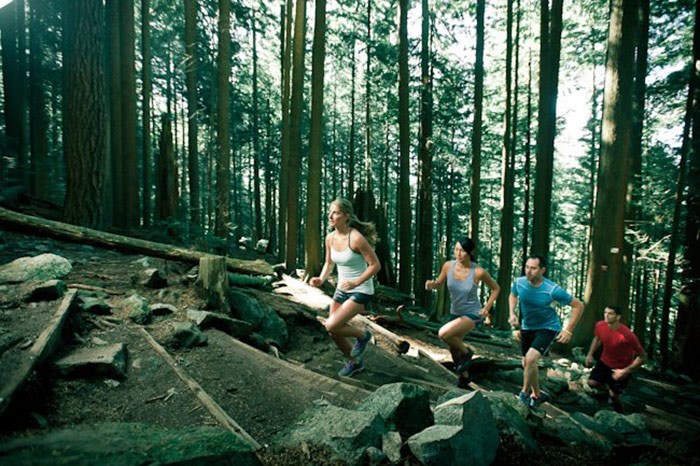 On Sunday, Grouse hosted its annual Seek the Peak race which saw more than 700 participants take on the 13-kilometre, 1,250 metre climb from Ambleside Park to the mountain resort.

Damien Humbert nabbed this year’s Seek the Peak title, with a time of 1:23:56. Topping the women’s category was Nanna Leegaard Kruse with a time of 1:42:57. In the relay category Team Gagno took top honours, clocking in at 1:42:59.

Since 2004 Seek the Peak has raised more than $450,000 for the BC Cancer Foundation and its support of cancer research throughout the province.