We hit a milestone of 100,000 followers on Twitter this week! To mark the occasion I figured I'd offer some thoughts on how we got here, where we're going, and give an overall look on what I've seen happen on Twitter locally over the past seven and a
0
Aug 18, 2016 4:47 PM By: Bob Kronbauer

We hit a milestone of 100,000 followers on Twitter this week! To mark the occasion I figured I'd offer some thoughts on how we got here, where we're going, and give an overall look on what I've seen happen on Twitter locally over the past seven and a half years. 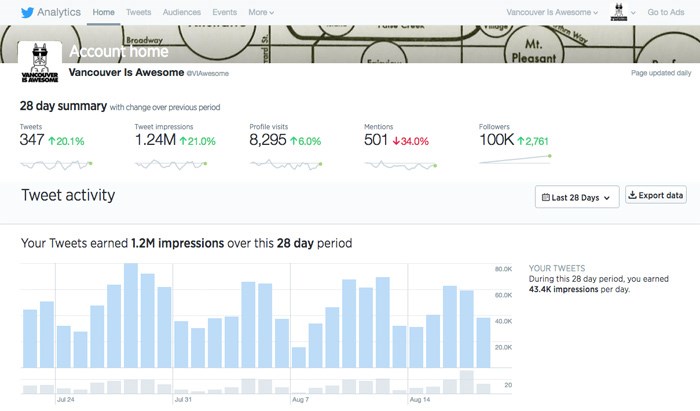 When I first created our @VIAwesome twitter account in April of 2009 we were a latecomer on the platform. We had launched our blog a year and eight months prior, and I had hesitated to sign up as I didn't see the value of tweeting. Then I was encouraged by a conversation I had with Jeff Hamada from Booooooom.com, who assured me that Twitter wasn't the place where people simply shared mundane details about of their daily lives and that if I wanted our media company to be a success I needed to get on there. I entered us into the space.

Back in 2009 if you lived in Vancouver and had 2,000-or-so followers on Twitter every PR agent in town was inviting you to attend their "social media influencer" event so you could tweet about it to your followers. It didn't matter if you were a school teacher, a student, a blogger, an actual journalist or a totally random person with opinions, the qualified "influencers" of 7 years ago were a ragtag bunch who were simply there and had developed a following by getting into conversations with people. These were the glory days for the everyman, a time when marketers were struggling to figure out how they could use social media to their advantage, throwing free drinks and products and meals at anyone who appeared to have a large amount of people hanging on their every tweet.

Before this it was social media for social media's sake. It was simply about connecting with people and being social online (hence the name. Huh.). Brands weren't in the space for the most part, and when they came in the new royalty of randoms were treated to many an appetizer, drink and a look at some new product or service that was being introduced. Aside from a few impressions on launch campaigns into a small echo chamber this practice in marketing by way of these folks resulted in quite a few falsely-inflated egos. It also resulted in a few careers (Miss 604 leveraged it to her advantage) and a ton of lessons for the PR and marketing people who were smart enough to know that they were onto something, and were happy to make it up as they went along. This strange practice of turning random citizens into VIPs so that they would tweet nice words about companies really laid the groundwork for influencer programs of today in which there are a number of fairly large organizations across Canada working to link brands - big and small - with specific personalities on social media. These days they mostly work beyond Twitter on platforms like Instagram and Youtube, and there's a lot of cash involved. When you look into the back end you'll see that actual analytics prove to brands that Marketing Company X was able to reach X amount of consumers with their product or message.

When we first launched our account my face was our avatar, and our bio noted that all of our tweets were authored by me. It was a lot more personal for me back then, and while I had (have) an aversion to attending the free drinks and appies events I described above I did want people to know who was authoring our tweets so I attached my face to it. As we grew I began to tire of being tied to the account personally, as for every person who wanted to tell us that they loved what we were doing we had another five lined up to tell us they thought we were evil bastards. And since it was my face on the account that "we" was "me", and as much as I didn't want it to hurt, it did. I can say without question that the hate directed towards me on Twitter contributed to the stress-induced eye disease I suffer from, and I was so relieved a few years back when I was able to hand the keys to some of our other editors, and take my face and name off of the account and just make it entirely about our organization. It's not a personal blog and this thing is not (and has never been) about me; it's a media company, and taking my face off of it was us growing up a little bit. Now if you really want to tell me how much you hate me personally, you can follow me on my personal account at @BobKronbauer. ;)

So how did we get here, to a place where we've got 100,000+ followers? There are a lot of ingredients that went into baking this cake but here are three of the main ones:

We deliver daily stories, events, timely tweets, etc and have gained a reputation where we're recommended as a follow not only by locals but by Twitter itself. Multiple tweets per hour have made us a destination that people are keen to keep an eye on because they know we're going to deliver the goods.

We've been doing the above for more than 7 years now. That adds up.

Wait... what? Yep, you read that right. According to our report on Twitter Audit 20% of our followers are actually fake. Over time as you build your audience the bots and the spammers and whoever those people are out there creating fake accounts stick to you like glue. It's not like we've bought followers like some local media and personalities have done (I won't point any fingers directly but encourage you to do a search of accounts you're suspicious of HERE), but when you look at the real numbers there are actually only 80,000 actual humans who follow us. So I guess we've got a ways to go before we really hit 100,000.

A quick search on three Twitter valuation tools pegs our account being worth somewhere between $3,976 and $104,774 (there is no consensus on the value of a twitter follower).

So where do we go from here? Do we keep with our slow growth as a medium-sized media company punching above our weight class or do we package up our Facebook Page which now has 122,000 Likes, our Instagram which has 51,000, our Twitter account and our website and sell to the highest bidder? And by "we" I'm going back to talking about "me" here as I own 100% of the company. Well, I have a story or two about the trials and tribulations of working with investors - and potential investors - but I'll save those for another time. For now follow @VIAwesome if you're not already, wouldja?

In my Workshop series I bring you behind the scenes of V.I.A., sharing stories of how we operate and also offering my take on other local media outlets. My aim is to pull back the curtain and show you how the sausage is made and tell stories that might not otherwise be told. Some are less awesome than others, but it’s all part of our journey and I hope to bring you along on it.