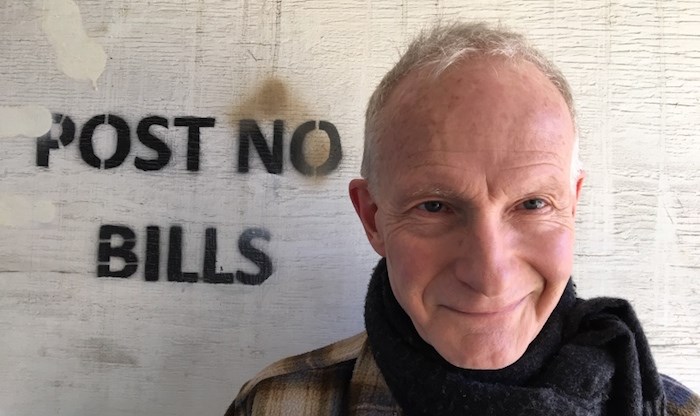 Bill Richardson is one of Canada’s great humourists, best known for authoring 14 books — some for adults, some for children — and for his years hosting the beloved CBC Radio program Richardson’s Roundup. He’s also lived Vancouver’s West End neighbourhood, off and on, since 1978.

You've lived in and out of the West End for many years. What keeps you coming back?

It's very familiar and village-like to me. A big reason I live in the West End now is because my partner Bill Pechet lives there, and he's very devoted to the place. We've never lived together in the almost 20 years we've been allied. I've had 10 addresses, and he's never moved, not once. As things now stand, it's a two-minute walk between our places west of Denman. I'm a bit of a hermit but, inevitably, when I venture out, I'll see someone I know, and have a short exchange and I can still feel like I'm in society without having to work at it.

The book has been described as a kind of last hurrah or love letter for a disappearing community in the West End. How so?

Truth be told, that's the publisher's blurb, but I'm somewhat sharing of the sentiment. These stories are expanded versions of a few of the many I've written for Christmas/holiday occasions over the years. They're all set in the West End or reference the West End substantially. Some I hauled from the 20th century and transplanted into almost 2020. So, naturally, the big questions of this specific moment, about gentrification and development and displacement, come into play. Change is unsettling, but as the climate emergency deepens I find the reshaping of the urban landscape less and less fret worthy.

Are the stories based on actual West Enders and experiences, or are they purely fictional?

I'm not a big fan of Christmas in any of its guises, but Bill and I love to tour around the West End and check out the tinsel festooned lobbies, the more garish the better. I'm genuinely fond of them, the evidence of tradition and caring, and that makes its way into one of the stories. None of the stories are autobiographical, exactly, but the recurring characters, the three magi of the book, Philip, Gary and Bonnie, have certain preoccupations that were once my own. They're all people entering the later stages of middle age, the age when one confronts past failures and emerging frailties.

You mentioned gentrification and development. What is your take on the current state of Denman Street?

I find Denman Street a bit depressing because I remember the palmy days when there were galleries and cinemas and performing venues: places that acknowledged the possibility of the soul, in other words. There are still small independent retailers but — dollar stores excepted — you can't actually buy anything on Denman that doesn't lead to excreting. And, of course, that's because the rents are so absurd. No one could set up a bookstore, or a button shop, or a curio emporium, and make a go of it — but that's endemic to the city as whole. I shop at the No Frills because the lighting is so flattering, and I can routinely be found at Shoppers, on a date night with Bill, checking our respective blood pressures. My local bar is Buckstop, which is open late. It’s a good place to take the pulse of the neighbourhood.

You accepted a dishwashing gig at Whole Foods in the West End. Why?

I needed a job. Both because I needed the dough and because I was going stir crazy at home. Whole Foods was having a hiring fair, so I went. I was the oldest person by about 40 years. I knew I'd be a disaster if I had to work with the public, so I asked if they had any openings for dishwashers. They did, and they hired me, and I was so grateful. I would do it again in a heartbeat. It was physical, social after a fashion, I really liked my colleagues, and although it was tedious, there was never any doubt about the expectation. I'd recommend it to anyone.

But you no longer work there?

I left the dishwashing job because I had to deal with family stuff in Winnipeg and also because I had this other job offer at University of Manitoba that took some pressure off. Now and again someone recognized me at Whole Foods, but it was never uncomfortable.

What is your Manitoba connection?

I grew up in Winnipeg, and when my father became ill in 2012, I moved back. Circumstances too cluttered to get into led to buying a house west of the city, quite a long way west, and I continue to spend swaths of time there. It's a beautiful, unsung part of the world. I go for walks. I listen to the birds. I stare into the middle distance and wait for the next season of Stranger Things. I have a job at the U of M as a writer in residence, so my Manitoba time this year will last through the end of November.

Where do you want to live out your days — in the West End or Manitoba?

I'm not sure how much longer I'll be able to keep up the back and forth. If circumstances allow, I want to be buried in Manitoba, in the little country cemetery near my house. It's a place of great peace. I expect that as I age, and as my requirements become more specific and more medically directed, I'll be in Vancouver and, yes, probably in the West End.

I Saw Three Ships: West End Stories by Bill Richardson is available now through Talonbooks and highly recommended as a holiday gift for anyone who has ever lived west of Burrard and east of Stanley Park.