Architectural drawing by the firm Gardiner and Mercer of the Marpole office and plant of United Distillers Limited ( Vancouver Archives Item : CVA 586-1957 ) This is the remarkable story of UDL, Vancouver; a once mighty distiller of spirits that has
Jason Vanderhill Jul 22, 2012 3:53 PM 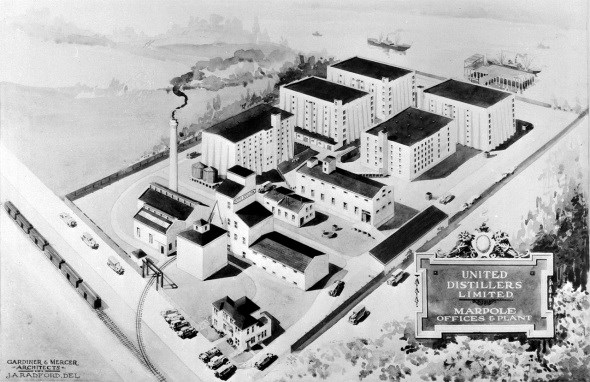 Architectural drawing by the firm Gardiner and Mercer of the Marpole office and plant of United Distillers Limited (Vancouver Archives Item : CVA 586-1957)

This is the remarkable story of UDL, Vancouver; a once mighty distiller of spirits that has nearly completely vanished from the visual history of our city. I haven't yet determined the precise date that United Distillers Limited was established in Vancouver, but according to Wrigley's BC Telephone directory, United Distillers Ltd. first appeared at 8900 Shaughnessy Street in 1927. This is significant, as it falls directly in the middle of American prohibition (1920-1933). United Distillers Ltd. of Vancouver was a publicly traded company, but it also had American roots. The early beginnings of UDL in America are equally elusive to track down, but it seems to me that Hyman Harvey Klein was the successful liquor dealer who founded UDL in Baltimore some time prior to American prohibition.

United Distillers Limited was located at the foot of Marpole, at 8900 Shaughnessy Street, not far from Oak Street and SW Marine Drive. The plant faced the Fraser River, where you can see ships at dock in the background of both illustrations, a particularly strategic shipping location. This leads us to our first anecdote of infamy.

After the alcohol reserves dried up in the USA in 1921, there was huge opportunity for rum-runners and bootleggers to fill that void by bringing alcohol in from Canada. In fact, the practice was fairly well organized and it was practically considered a 'respectable trade' during the 1920s, until exporting liquor to the United States became illegal in 1930. In the book The Business of Crime: Italians and Syndicate Crime in the United States, Humbert S. Nelli explains:

The Internal Revenue Service determined in investigations conducted in 1935 that Canadian distilleries figured prominently in the liquor-smuggling business; not only had the distilleries been “manufacturing liquors of a type designed only for the American trade” but also they “had established depots at smuggling bases on the French islands of St. Pierre et Miquelon, in the Bahamas, in British Honduras, at Ensenada, Mexico, at Papeiti, Tahiti, at Vancouver, British Columbia, and at other points … [and] thereby almost completely encircled the United States with liquor smuggling depots.” The investigations resulted in a compromise arrangement with the Treasury Department whereby four Canadian concerns—Distillers Corporation-Seagrams, Ltd.; Hiram Walker-Gooderham and Worts, Ltd.; Canadian Industrial Alcohol, Ltd.; and United Distillers, Ltd.—agreed to pay a $3 million fine. This was a small penalty compared with the hundreds of millions of dollars in profits the companies had made by exploiting the American market during prohibition years.

And so, I imagine that dock along the Fraser River was the starting point for many thousands of cases of alcohol that would mysteriously make their way to dry bars all across the USA. The slap on the wrist of a $3 million dollar fine split between 4 large distilleries must have seemed like the cost of doing business.

But this was not the only time the company would attract the attention of American authorities. Around the time of WWII, when alcohol was once again a scare commodity, profits soared at UDL, raising the interest of the IRS. The Financial Post sets the stage in this article from April 5, 1952. The IRS was investigating the dealings between UDL in Vancouver and the man behind the UDL empire in Baltimore, Hyman Harvey Klein, who was now living in Los Angeles. The IRS claimed millions in unpaid taxes. This Financial Post article gives a good deal of background information about the Canadian operations, stating:

The three directors at United Distillers Ltd. in Vancouver were also under scrutiny in the case. These three men were Isidore Joseph "Hicky" Klein (brother-in-law to Hyman Harvey Klein; I.J. Klein died 1955), Albert L. (big Al) McLennan (born in New Westminster in 1885 or 86, he died in 1968), and Mr. George William Norgan (born July 11, 1885 in Palmerston, Ontario). The article describes the men:

I. J. Klein is described as a man who stays in the background, makes no social, sporting, or entertaining splash. McLennan, though hardly an ardent socialite, is president of the B.C. Turf & Country Club. Norgan has a fine residence in Western Vancouver. It was originally built for A. J. Taylor, one of the men originally responsible for attracting the Guinness money to Vancouver. The house was later bought by Garfield Weston. Norgan also owns the Portland (Oregon Beavers) baseball team and is a sponsor of golf tournaments, a game at which he is a topnotcher.

In 1954, nine men were indicted in what was said to be the largest attempted income tax evasion case in the history of the Internal Revenue Service. H. H. Klein and 2 lawyers were convicted, fined, and sentenced to prison time (the fines totaled $18,000). Klein's law firm reminisces about the case in this memoir. H. H. Klein appealed to the Supreme Court in the US but the court refused his appeal. The three Canadian UDL directors were not charged in the case.

I don't quite know how to end this story because I don't know what became of the United Distillers Limited Vancouver operations. Were they bought out by the Kennedys or the Bronfmans or did they run the operation into the ground? The end of UDL seems just as ambiguous as the beginning. There's not much left to remember UDL in Vancouver today. I did find this Liquor Control Board of British Columbia Price List from March 1, 1938 which lists many of their products, priced by the case. You can occasionally find empty prohibition bottles for sale on eBay or at flea markets across the USA. Finding bottles with actual labels is a much more challenging task, but next week I'll feature some of the advertising depicting a few of their products.

New warehouses and industries are now located on the Marpole site, including the Raincoast Books warehouse which opened in 1999 at 9050 Shaughnessy Street. Also created in 1999 is a relatively new City of Vancouver park at the foot of Shaughnessy Street on the edge of the Fraser River. The Shaughnessy Street park is one of 10 designated sites which feature beach volleyball courts. I don't believe there is a plaque in the park which will tell you these tales from prohibition days and beyond, so you may now consider yourself informed!

Here's what Vancouver's free floral 'Femme' event dedicated to 'significant women' will look like
May 23, 2022 4:15 PM