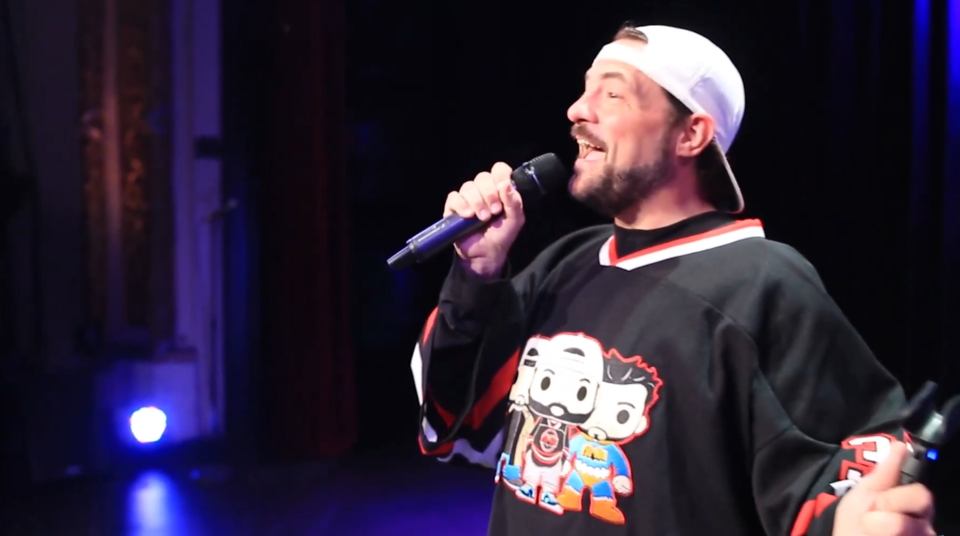 Kevin Smith will be on stage to talk about the documentary which inlcudes scenes of him on stage.TCB Productions / Film Threat / YouTube

Cult icon Kevin Smith is one of the most famous names in film and nerd culture, with a huge variety of projects including Clerks, Dogma, and Chasing Amy.

Because of that, someone has made a documentary about him (which Smith participated in, a lot). And with Smith having a personal connection with Vancouver (he went to film school here for a semester) the Rio will be showing the film, which just premiered at SXSW's online festival.

And to top it off, Kevin Smith will be on hand to answer questions after the film, along with the film's director Malcolm Ingram; the two have set up a tour of five cities (and maybe Toronto as well) to show the film and interact with fans.

"I’ll be there with you at every stop to front fun-filled post-show Q&A’s with me and Malcolm, after you watch the @SXSW favorite that documents my dopey life’s journey from Highlands to Hollywood!" writes Smith in an Instagram post.

THIS NOVEMBER! Come see a movie about a guy who also makes movies. CLERK, a documentary about this dummy, is coming to AUSTIN, ASBURY PARK, ST LOUIS, CHICAGO, and VANCOUVER! Join me & director @MalcolmIngram for the movie, followed by a Q&A! Tickets at: https://t.co/R9gsZWiDVS pic.twitter.com/BmKTTCn3xc