Letters forming the words “Canada Post” and “Postes Canada” used to be attached to the exterior of the former Canada Post building at 349 West Georgia St. and many found new homes. Here's one of them.
Sep 17, 2019 3:14 PM By: Naoibh O’Connor 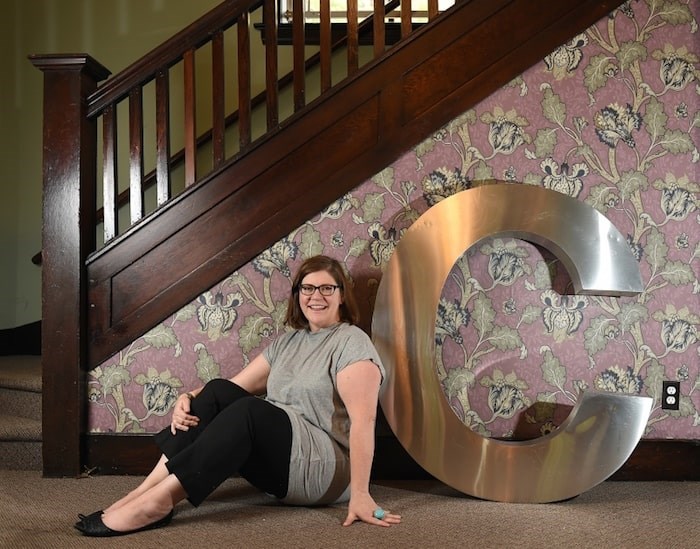 Christine Hagemoen is a proud owner of a giant capital letter C, which used to be on the exterior of the former Canada Post office in downtown Vancouver. Photo by Dan Toulgoet/Vancouver Courier

The “C” leaning against the wall in Christine Hagemoen’s small apartment is large — unexpectedly so, she says.

It is 1.14 metres high by 0.8 metres wide (or for all you Imperialists, 45-by-33 inches). Despite its size, she couldn’t pass on the chance to buy it when the opportunity arose.

Hagemoen collects the letter “C” based on her first name, having been inspired by the apartment in the Mary Tyler Moore Show where a reasonably sized “M” is famously affixed to the wall. 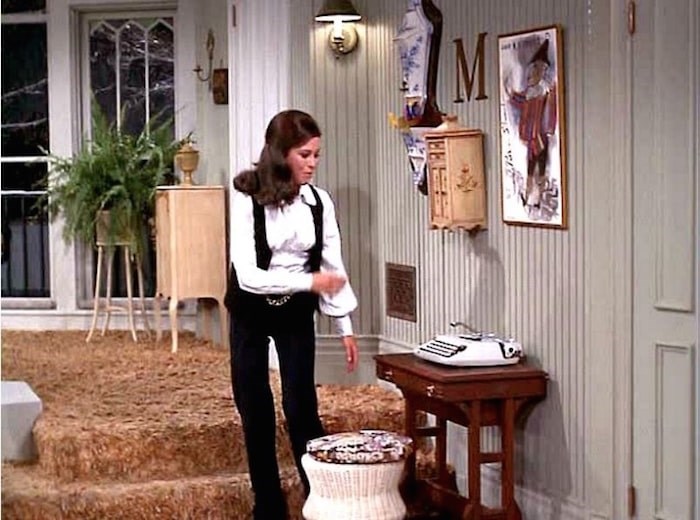 The “M” on the wall in the Mary Tyler Moore Show

Hagemoen is also a local history lover. A third-generation Vancouverite, she works in the culture and heritage sector, writes a history-themed blog called Vanalogue, and occasionally pens online history pieces for Scout magazine.

It was her combined interest in Cs and local history that was piqued when she spotted an Instagram post by The Found and the Freed almost two years ago, in October of 2017.

The Victoria Drive vintage store posted a photo of a lowercase “a” it was selling with a unique provenance.

“Just got this giant letter ‘A’ today – it’s from the old Canada Post building and is surprising light to hang — more letters available (spelling Canada Post),” the notice stated.

Letters forming the words “Canada Post” and “Postes Canada” used to be attached to the exterior of the former Canada Post building at 349 West Georgia St., but Canada Post took them down a few years ago when the building was decommissioned and its operations moved to Richmond. QuadReal Property Group is redeveloping it into an office and retail building rechristened “The Post.”

Intrigued by owning a piece of city history associated with the former Canada Post building, whose mid-century modern style she appreciates, Hagemoen asked if the vintage store had a “c.” It did.

Not a lowercase one like she assumed — a large capital C — but she liked the look of it, and the idea of having another letter C appealed to her, so she bought it for about $175.

“I liked [the history] aspect of it, too,” she said. “I thought it’d be nice to have a piece of it and if I didn’t take it someone else would.” 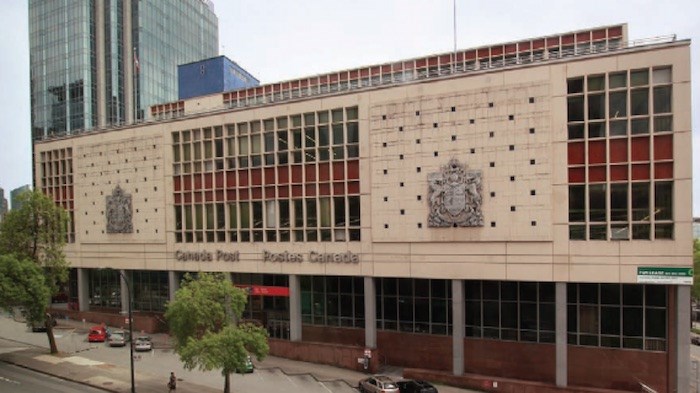 The letters weren’t part of the original Canada Post office, which was built in the 1950s. Heritage expert Don Luxton estimates they were up put up within the last 15 to 20 years. File photo Rob Kruyt

Although it takes up a fair bit of space, it’s hollow and therefore light and quite delicate. While Hagemoen doesn’t have paperwork verifying it’s from the old Canada Post building, she said paint drops on the top of the C match the colour of the building.

The letters, however, weren’t part of the original Canada Post office, which was built in the 1950s, according to heritage expert Donald Luxton, who noted the original sign was only in English.

Hagemoen did a little bit more digging and discovered the letters probably date back to the 1970s. The Government of Canada, under Pierre Trudeau, passed the bilingual act in 1969, which meant all government buildings had to have signs in both French and English, she told the Courier in an email. While old photos from the 1950s and 1960s show signs reading, "Post Office," she found a 1981 City of Vancouver Archives photo with the newer letters that match the one she owns.

Regardless, for Hagemoen, it’s not the age of her letter C but its connection, for however long, to the former Canada Post building that matters.

She’s not the only Vancouverite who saw the letters’ value — Luxton noted someone from his office bought the “e” from the vintage store.

Meanwhile, some heritage elements from the former Canada Post building have been preserved and will be incorporated into the redevelopment, which is expected to be finished in a phased completion process between the fall of 2022 and the fall of 2023. 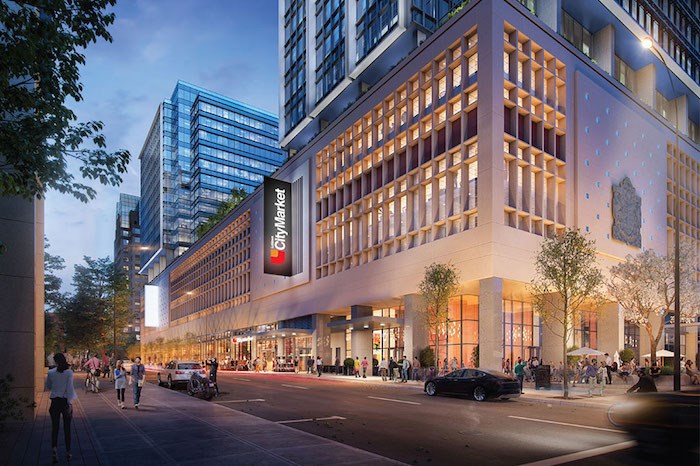 Rebecca Catley, vice president of corporate communications for QuadReal Property Group, told the Courier the two 5.8-metre cast-aluminum Arms of Canada by Pearson Iron Works will remain in their current location on the Georgia side of the building.

The 4.9-metre-tall bas-relief of the Postman that dates from 1956, which was on the Homer side of the building, will be reinstalled once construction is completed but it will be placed in a more prominent position on the Hamilton side, facing Queen Elizabeth Plaza.

A large interior painted mural by Orville Fisher depicting early methods of transportation, and the original mosaic tile mural of a woman and child by Paul Huba, will be reinstalled once the building is completed as well.

Catley said QuadReal also has the mailboxes from the interior of the building, which will be installed in common areas (the atrium) where the public will be able to see them.

Some (pre-redevelopment )interior details from the downtown Vancouver Post Office. Sure hope @QuadRealGroup is retaining some of these features, or at least found a good home for them. #vanarch @HeritageVan @VanHeritage pic.twitter.com/mnvXxYRwp7

Catley added that many smaller items will be incorporated into the building. Elements of note that will either be left in place or reinstalled include:

Hagemoen, for her part, is just pleased to have the C.