That Michael Leland even made it to a cardiologist comes in large part thanks to Will Riordon, an advanced care paramedic with B.C. Emergency Health Services.
John Kurucz May 8, 2019 7:31 AM

Life caught up with Michael Leland right around this time last year.

It was the morning of May 3, 2018 and the 60-year-old was lying on the floor of his Downtown Eastside apartment, unable to walk and barely able to reach a phone.

The perceived stigma of calling an ambulance weighed on Leland’s mind as he flirted with death for the fifth time in his life. 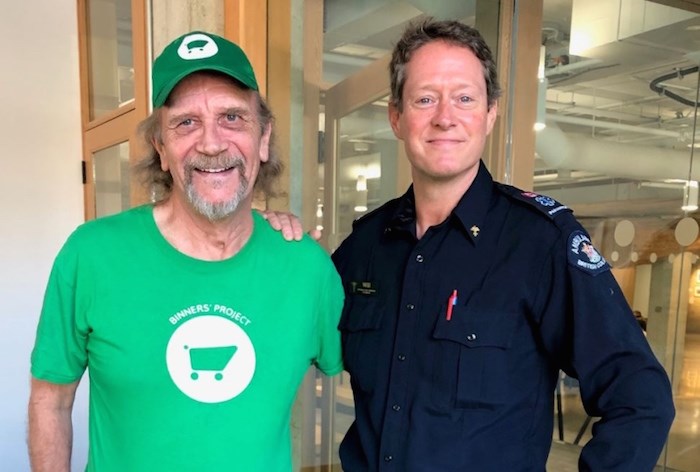 Michael Leland, left, was reunited with paramedic Will Riordon May 7 almost one year to the day that Riordon saved his life. Photo via Vancouver Courier.

“My strength started to leave me. I knew that something was really wrong,” Leland said. “It’s really hard to phone 911. I didn’t want them coming for nothing.”

Far from being nothing, Leland was in the midst of a massive cardiac arrest. It was his second heart scare and he'd also endured three strokes previously. A 16-day hospital stay later revealed Leland’s heart was a total mess: two 100 per cent blockages and a pair of others assessed at 90 per cent.

“There were no bright lights, I guess I’m going to hell,” is how Leland later recalled the experience to his cardiologist.

That Leland even made it to a cardiologist comes in large part thanks to Will Riordon, an advanced care paramedic with B.C. Emergency Health Services.

Riordon was one of three first responders who treated Leland, who at first blush, didn’t exhibit the usual signs of a heart attack. Diagnostic testing soon revealed the severity of the situation and Leland was en route to St. Paul’s Hospital within minutes.

On May 7, the pair met for the first time since Riordon offered those words of hope, and the Courier was given an exclusive invite to the reunion. The pair’s story will be documented in an episode of the Knowledge Network series Paramedics: Life on the Line, which airs May 14.

Leland wanted details of the meeting, and the upcoming episode, to be made public for a very specific reason.

“This is not an evil neighbourhood. It’s not all bad down here, and people have to know that,” he said. “It’s really, really important to know. Lots of us have made poor decisions previously in our life; it’s how you decide to atone [for] them that’s going to make a difference in where you go.”

Leland is brutally honest in recounting his life story. He lost his job as a commercial fishermen 20-plus years ago and spent most of his adult life as a “raging alcoholic.” Leland says he drastically cut back on drinking eight years ago, still has a sip every once in a while, and hasn’t been drunk in more than a half decade.

“Everything that I’ve gotten at this point in life is earned in that sense of the word,” Leland said. “I’ve lived a hard life and lived it fast. When I was fishing, the boat would come to dock, we would end up in the bar and I would stay in the bar until the boat left again.”

Leland’s been binning in the Downtown Eastside for 21 years and maintains an active role in the Binners’ Project, a social advocacy group that encourages recycling and making ends meet by collecting other people’s waste.

His previous life entailed walking or cycling upwards of 50 kilometres every day — out to West Vancouver and back — to make, at best, $40 a day.

Leland has inevitably slowed down since last year’s setback, but the fact he’s even alive is extraordinary. Walking seven feet was impossible for the first three weeks after he was discharged from St. Paul’s, though now he puts in 20 to 30 blocks a day.

On the day of the Courier’s visit, Leland is lean and his teeth are a glowing white.

He looks and sounds healthy.

“I’ve been doing this for 20 years, and there is no end of reward that I obtain from engagements like dealing with Mike,” Riordon said. “For him to come and re-iterate that for me… was fantastic.”

Unlike his recent past, Leland is pretty sure of what tomorrow and next week will look like. He’ll continue speaking to young people about the dangers of the path he took and will continue working with the Binners’ Project.

“When I was younger, I used to have to go out to my yard to see if my vehicle was smacked or dented,” Leland said. “I couldn’t even remember driving home. Now that’s an asshole, when you’re putting everybody at risk like that. I began to realize that there were things we could do down here that people appreciated. I hadn’t had that most of my life. When you realize you’ve got something to contribute, you realize it’s worth contributing.”