PROVOKE, ENGAGE, ANIMATE. Our vision at the Museum of Vancouver (MOV) is to hold a mirror up to the city and leads provocative conversations about its past, present and future.
0
Sep 2, 2011 2:44 PM By: Museum Of Vancouver

In the second installment of the Painful Crushes Vancouver series, things get serious. This month I spoke to Charlie Demers, a writer and comedian who is in a committed relationship with Vancouver, about the dialectics of loving the city.

I caught up with Charlie after MOV’s KEN Talks to discuss how he is embracing the contradictions, tensions, and messiness of love. Charlie’s unique relationship with Vancouver is reflected in his 2009 book Vancouver Special which uses a blend of humour and sincere affection to explore the city’s complex political and social realities. In it Charlie moves seamlessly from discussing the Squamish nation’s legend of the Two Sisters mountain peaks (otherwise known as the Lions) to cracking jokes about the abundance of massage clinics with opaque window fronts (“nobody’s that embarrassed about tennis elbow”). His writing reflects both the beauty and ridiculousness of Vancouver and reveals something we probably already knew: love ain’t easy. 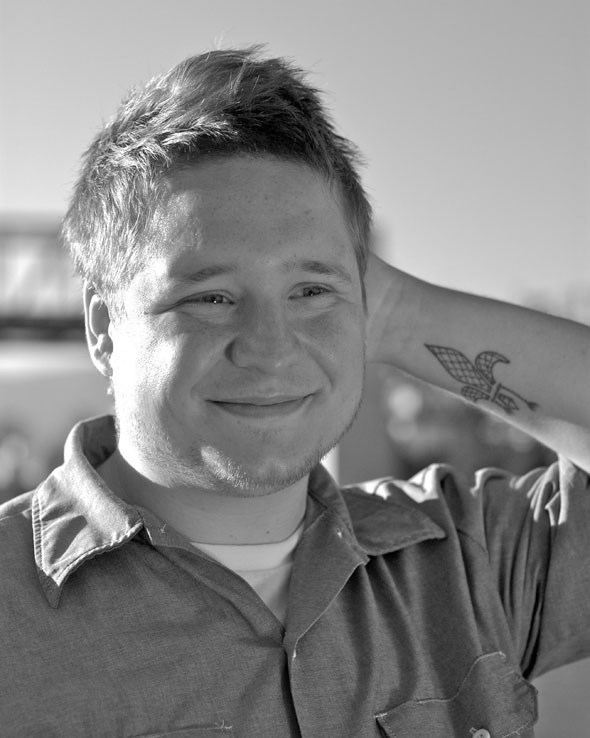 You seem to have bypassed a painful crush on Vancouver and moved straight into a pretty healthy relationship with the city.

Well, actually it is painful in some ways. Historically, it’s always weird when you love a place like Vancouver that was created at the expense of a lot of people’s lives. In any colonial context, no matter how far we think we’ve come there’s always memories of those atrocities. Socially, Vancouver can be extremely frustrating. The list of idiocies and flagrant disavowals of common sense are well rehearsed and endless. And from an individual standpoint it can be really tough if you’re someone who wants to make a living in entertainment or arts and culture.

That being said, it’s also just such a powerfully, wonderful city. I think any place really worth loving is going to be worth hating too because if there’s nothing to hate about a place there’s clearly nothing interesting enough to make it worth loving either.

How do you resolve your love for the city with your open criticism of it?

I think you want to get away from thinking, “Okay, I just have to get to that place where everything’s reconciled.” And just realize that there’s always some contradiction. Friction is actually a good guard against complacency. I’m someone who loves Vancouver and thinks that more people should be paying attention to us but I wouldn’t call myself a booster of the city because to me that seems like a really uncritical approach to living in a place.

In your book you bring up a lot of contradictory images of Vancouver and look at how they exist side by side. Do you think these contradictions are unique to Vancouver?

I hear people say, “Complete the sentence: Vancouver is ____.” And I just think what kind of shitty place would you live in if you could finish that sentence. You know like, “Edmonton is eager! Or enthusiastic!” Vancouverites have this thing about Vancouver where they’re like “I can’t sum it up in one sentence.” That’s a blessing. Places you can sum up neatly are places you should leave after an afternoon because there’s clearly not much going on there.

Your book has been called a love letter to the city, is it?

It was a love letter but it was kind of like a love letter to someone who’s in rehab right now and you really need to tell them some harsh truths. It’s a real love letter; I care about Vancouver and it matters to me if it goes off the rails. I wrote the book because I knew there was going to be a lot of brainless cheerleading going on before the Olympics and thought that it would be good to have something out there to balance that out but that didn’t dismiss the city.

What else did I take away from my talk with Charlie? A successful relationship with Vancouver seems to require a sense of humour. Charlie is on Twitter and you can buy Vancouver Special HERE. Stay tuned for the third and final installment of PCV next month!

Anna Wilkinson is a museologist and oral historian living in East Vancouver. Her Chestbursters blog is a collection of endearingly awkward, cringe-inducing, and heartbreaking crush stories.

Last weekend to bask in the largest winter lights display in Metro Vancouver
Jan 18, 2020 12:27 PM
Comments
We welcome your feedback and encourage you to share your thoughts on this story. We ask that you be respectful of others and their points of view, refrain from personal attacks and stay on topic. To learn about our commenting policies and how we moderate, please read our Community Guidelines.