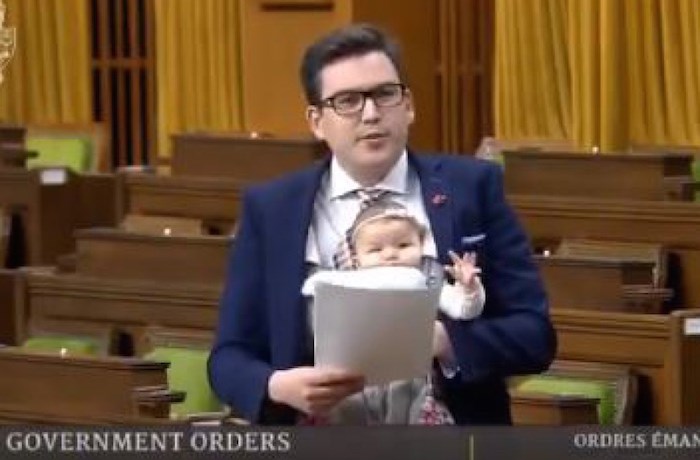 Terry Beech speaks in the House of Commons with his five-month-old daughter, Nova.

The Liberal legislator from Burnaby North-Seymour wore his five-month-old daughter in a carrier to the House of Commons Monday and rose to speak in favour of a motion to declare a climate change emergency.

“I have a special guest with me today, Mr. Speaker,” Beech said. “This is her first trip to Ottawa, and I thought that there was no better opportunity for her to visit this house than during a debate on the defining issue of our generation.”

Nova for you, your peers, and future children, our government acknowledges that we are in a climate emergency‼️ That is why we have a plan to tackle climate change and ensure you have a cleaner future.
•#BurnabyNorthSeymour #ClimateChangeisReal #ClimateChange @cathmckenna pic.twitter.com/EVifvEc2CR

Beech said a report from the UN’s Intergovernmental Panel on Climate Change “has made our collective impact on the world very clear.”

“Already, the human race has warmed the planet a full degree Celsius above pre-industrial levels. If we do nothing, this will reach 1.5 degrees between Nova’s 12th and 35th birthday,” he said. “We are running out of time.”

Beech, whose riding includes the terminus of the Trans Mountain pipeline, said climate change must be a non-partisan issue.