Anyone passing through Lower Lonsdale in the last week wouldn’t have been able to miss the more than 200,000 twinkling, coloured lights draped over the Polygon Gallery. But it’s not a Christmas display – at least like the kind you’ll see at the mall.
0
Nov 26, 2018 2:01 PM By: Brent Richter

The allusions to Clark Griswold are impossible to avoid.

Anyone passing through Lower Lonsdale in the last week wouldn’t have been able to miss the more than 200,000 twinkling, coloured lights draped over the Polygon Gallery. But it’s not a Christmas display – at least like the kind you’ll see at the mall. 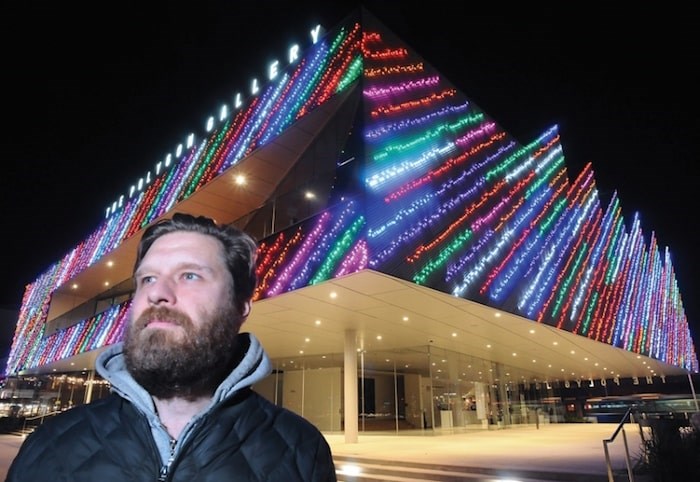 Polygon has commissioned visual artist Kevin Schmidt to adorn the building with his latest piece, Reckless.

Over the course of a month, Schmidt affixed more than 214 strings of Christmas lights to the exterior using good old-fashioned zap straps. The lights are programmed to dance and flash in time with his own re-recordings of Bryan Adams’ 1984 album (and the piece’s namesake) Reckless.

Schmidt chose that particular artist because Adams is a North Shore export, and that album because it holds a special place in Schmidt’s heart.

It’s dated and a bit cheesy, Schmidt will be the first to admit, but what isn’t this time of year?

“I have a similar kind of mixed feelings about the sentimentality of Christmas light displays and the kind of sentiment that’s involved,” he said. “On one hand, Christmas is a really lovely time of year because it’s about peace on Earth, goodwill to men, but it’s also pretty crassly commercial.”

Reckless is also something of a loving joke made about the already-iconic architecture of the Polygon Gallery by Patkau Architects, Schmidt said.

“I’m putting a suburban popular culture skin onto it and so I’m trying to make a kind of a rupture between something that’s an official spectacle versus something that’s maybe a bit more personal,” he said.

The cover songs themselves are transposed and recorded in a particular way Schmidt said he hopes will influence how people feel when they take it all in.

The songs are all instrumental – no lyrics, all melody – slowed down, washed out with effects. Schmidt calls is “shoegazer elevator music.”

The tunes are pumped out of the speakers in the building’s soffit at a modest volume so you won’t be able to hear it until you come up to the gallery. Or you can listen in on FM radio, where the gallery is broadcasting the music at 87.8. The only song Schmidt has recorded so far is the opening track for the album, “One Night Love Affair,” but Schmidt will be adding more over the coming months.

“I want people to enjoy it. It’s a fun thing, I think,” he said. “I hope that they can look at the work, listen to the music and enjoy the display of lights and hopefully they find my joke about architecture funny.”

Reckless is the second in a series of public pieces Polygon is commissioning in collaboration with the Burrard Arts Foundation intended to draw in people to engage with the gallery who otherwise might pass by.

Polygon director Reid Shier acknowledged people might first look at Reckless and mistake it for a tribute to a National Lampoon movie. But, he said, he hopes people aren’t so dazzled they miss out on Schmidt’s message.

“All good. All good,” he said. “We did time it for now thinking it would be something people might appreciate at this festive time of the year but it is first and foremost a public artwork.

Shier was standing by when the kinetic art first lit up LoLo on Saturday night.

“I was absolutely thrilled. Just thrilled with it. I think it’s fantastic,” he said. “We definitely invite everybody down to look and to listen, most importantly. It really comes alive when you hear it and see it together. That’s really, really a critical facet of it.”

Reckless will be turned on every day from 4 till 11 p.m. It is expected to run until the spring.

Polygon is offering free guided tours of the display every Saturday at 2 p.m. Private tours can be booked through the gallery’s management.