“It’s going to be like a neighbourhood-wide I Spy game," says the mom of three, who encourages everyone to participate
Mar 25, 2020 2:19 PM By: Alan Campbell 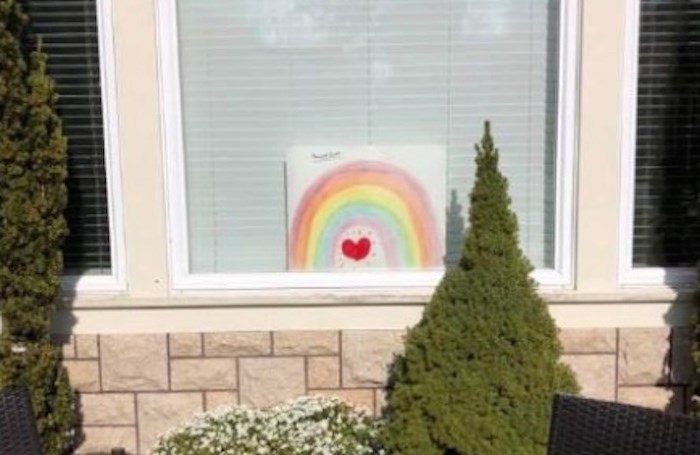 Sharline Gosal and her kids are drawing rainbows and posting them on their window in a bid to encourage others to do the same. Photo submitted

A Richmond mom of three has kicked off a colourful craze she hopes will sweep the city and country to keep kids occupied during the COVID-19 pandemic.

Sharline Gosal and her children – 10-year-old twins and a nine-year-old – have drawn rainbow pictures and then posted them in their window and are urging others to do the same.

Gosal, whose kids attend Bridge elementary near Steveston Highway and No. 3 Road, said, if more people post their rainbows, kids can count them while out on walks.

She’s hoping the move will break the monotony for children who’re adhering to the pleas of health officials to avoid play dates, playgrounds and maintain the two-metre social distance.

“The neighbourhood kids are going on walks, but can no longer see their friends or go to the playground,” Gosal told the Richmond News.

“Some of us are putting rainbows in our windows for them to spot as many as they can, while out on the walk.

“It’s going to be like a neighbourhood-wide I Spy game.”

Gosal said Saturday she was on day seven of self-isolation, due to her youngest child having epilepsy and her having a lung disease.

“I’ve also asked my family in Nova Scotia to [share the rainbow idea],” she added.

“Let’s share this like crazy. My kids need something. I’ve shared this with all my family in Canada, from coast to coast.”