She was greeted by a crowd at the breakwater, who cheered, clapped and sounded horns. 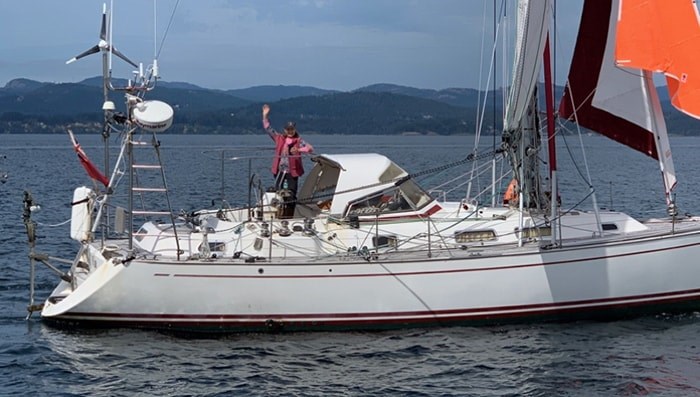 Jeanne Socrates, 77, is struggling with an entire day of little to no wind as she aims to pass Victoria’s Ogden Point breakwater to become the oldest person to sail around the world solo, non-stop and unassisted. She set sail on Oct. 3, 2018,

“There’s great excitement but a sense of nervousness that she is going to take forever to get in,” said Steve Illman, of the Royal Victoria Yacht Club, who is on the water watching her drift in.

Socrates has been at sea for 338 days.

Passing by as she sat out on her sailboat, she waved and said she is “great.”

Despite having dodged cyclones and endured a knockdown, sleepless nights, and boat repairs, perhaps the most difficult part of her journey is the final stretch, said Illman.

The drift is excruitating for onlookers who want to cheer on to a big finish.

Supporters feared she might fall asleep on her approach.

“It’s a bit nerve wracking to have come this far and then to hit the most difficult part of getting to the destination — dealing with currents and shipping lanes,” said Illman.

“In terms of crashing this is the most difficult part,” said Illman.

That’s why several boats went out last night to accompany Socrates to shore. Many more went out this morning to greet her.

Seasoned sailors who have sailed the world with crews are taken aback by what Socrates has accomplished alone, especially at her age, said Illman.

She started sailing at age 48.

“It’s just insane,” said Illman. “Everyone is really excited. A lot of us thought we’d never see her again.

“I just completed a 10,000-mile voyage and the crew on the boat couldn’t understand how she could possibly do this alone,” said Illman. “They are in awe of her abilities.”

Considering the outrageous seas and all the things on the boat that have failed and broken — that Socrates has been able to fix — lllman said her accomplishment is one for the history books.

“Just having the fortitude to brave all that stress and anxiety,” said Illman.

The current record holder for an around-the-world unassisted solo sail is Minoru Saito, who completed the journey in 2005 at the age of 71.