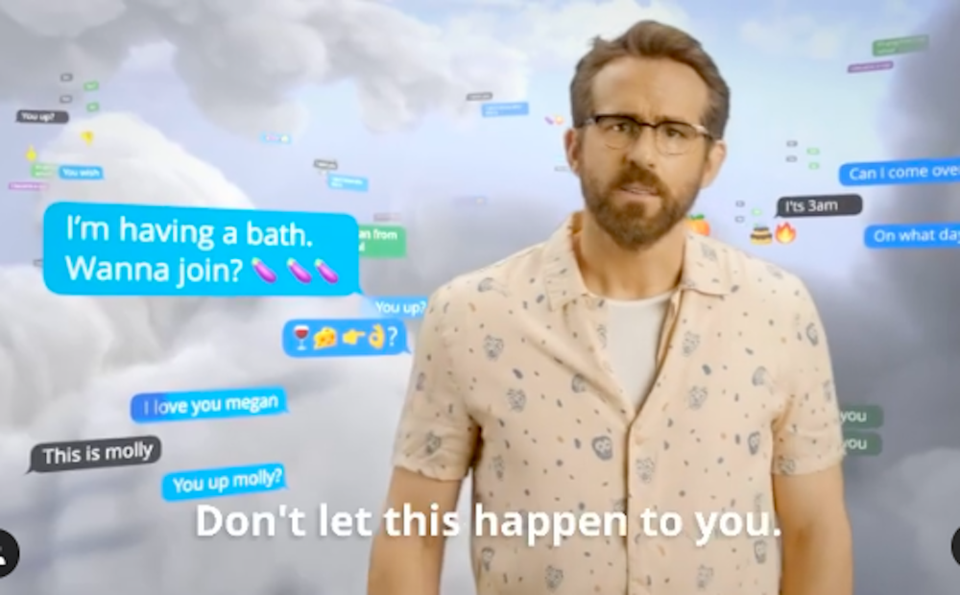 Vancouver-born actor Ryan Reynolds is advising people not to "drink and dial" in a video posted May 4, 2021 that features Aviation Gin and Mint Mobile. Photo via vancityreynolds / Instagram

Ryan Reynolds is advising people not to "drink and dial" in a new video that features two of his companies.

In the wake of increased vaccination rates and bars and restaurants opening south of the border, the Vancouver-born actor says people should stay vigilant against texting people after drinking.

As an owner of a gin company (Aviation Gin) and a wireless company (Mint Mobile), Reynolds adds that when you "Aviation and Mint, it never goes well."

The funnyman notes that "dignity and grammar can vanish in an instant" and "emoji abuse spreads unchecked."

Even worse, Reynolds notes that some of the most scandalous messages may end up in the direct messages (DMs) of the wrong people. He shares three eggplant emojis with a text that reads: "having a bath, wanna join?" - he says his mother sent his brother the racy message after only "half a gin and tonic."

Check out his funny video.

'This is our shot': Ryan Reynolds is also wearing a cool t-shirt to fight vaccine hesitancy

Multiple famous Canadians have come together with healthcare professionals to encourage people across the country to get vaccinated, and Reynolds is part of the campaign.

In the wake of soaring cases of coronavirus (COVID-19), healthcare professionals and famous Canadians are spreading the message that vaccines are safe.

But everyone needs to roll up their sleeves.

The This Is Our Shot campaign launched last week was driven largely by groups that have been reaching out to and advocating for racialized communities bearing the brunt of the pandemic. The goal is to dispel myths and to answer questions in more than two dozen languages.

The campaign underscores that COVID-19 may cause serious illness and death in people of all ages, not only older adults or people with chronic medical conditions.

Reynolds shared his support for the campaign on social media, rocking one of its trademark t-shirts. He quipped, "matching room not included."

Ryan Reynolds live-tweeted himself drinking and watching a movie. We love it (VIDEO)
Mar 18, 2021 4:25 PM
Comments