Dean Saldanha and his sister, Dielle Pinto will both be heading off to the Scrabble championships in their parents’ home state of Goa, India, in mid-October.
Oct 4, 2019 6:00 AM By: Maria Rantanen 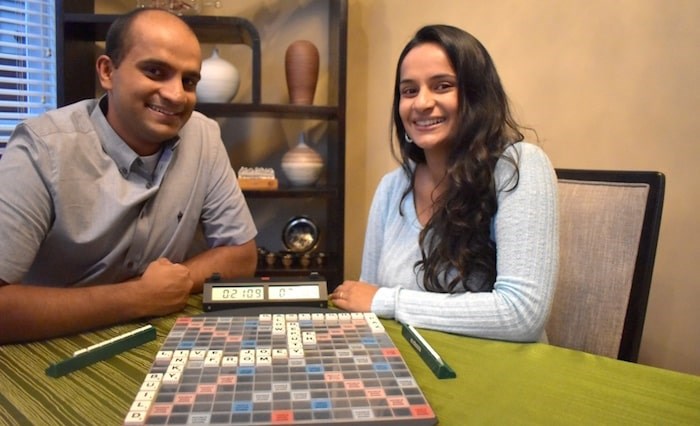 Dean Saldanha and Dielle Pinto have memorized thousands of words ahead of the World Scrabble Championships in Goa, India. Photo by Maria Rantanen/Richmond News

“God is neutral” — no, it’s not a religious mantra, but a guide for Scrabble players to look for these letters, the best ones in the Scrabble bag.

Dean Saldanha loves the strategy involved in Scrabble — saving the right letters, watching for open tiles that can double or triple his score and keeping an eye on his opponent’s plays. He’s been playing and competing from a young age and is now heading to the World Scrabble Championship with his sister, a fellow Scrabble enthusiast.

The game is part luck — in that players don’t know what letters they will pull from the bag — and part strategy — watching what one’s opponent is playing, Saldanha said, but strategy can overcome luck.

“For me, every game is different — you never know what you’re going to get,” he added.

Scrabble isn’t necessarily about language, rather about mathematical calculations of how to best place strings of letters on the game board, explained Saldanha and his sister, Dielle Pinto, who will both be heading off to the championships in their parents’ home state of Goa, India, in mid-October.

Scrabble players spend countless hours learning the thousands of words that can be played, and when they line their letters up alphabetically on their rack, their brains are trained to see the combinations that will produce acceptable Scrabble words.

“S” is a great letter because it can be added to most nouns to score big-time, but the most troublesome letter in Scrabble is usually “Q.” However, with the recent addition of the word “qi” — “life force” in Chinese, also spelled “chi” — into the Scrabble dictionary, players might learn to love this letter as well.

The best combination of letters is the one that makes up the word “retains” because it can be transformed into the words retinas, nastier, stainer, antsier, and the lesser-known words retsina, anestir, ratines and stearin — all seven-letter words that reward the player with a 50-point bonus.

The brother and sister grew up playing Scrabble and both their parents also played and competed — once his own mother disqualified him for a world championship, Saldanha explained.

Saldanha and Pinto grew up in Dubai where they started competing locally, nationally and internationally. When they moved to Richmond in the late 1990s, they continued to play, representing Canada.

The 10 best players from Canada qualify for the Worlds, held every year.

Since both have moved away from home and are establishing their own families, there are more things competing for their time than the Scrabble board. But the motivation for Saldanha and Pinto to qualify this year was high since the championship is in the place their family originates from — their parents will travel with them to the event.

At the Goa championships, running from Oct. 16 to 20, there will be players from 53 countries. The players will compete in 32 games over four days, leading up to the finals between the two top players.

Saldanha and Pinto belong to the Vancouver Scrabble Club. This will be the fifth time Saldanha is competing in the Worlds, while for Pinto, it’s her third time.

This time round, Pinto’s travel plans were in limbo as she waited for clearance from her doctor to go as she is expecting her first child.

Competing in Scrabble has built up friendships for the brother-and-sister pair, and sometimes they travel and visit other players around the globe, and they always welcome fellow Scrabble players when they arrive here locally.

“(Because of Scrabble) I have friends across the world,” Saldanha said. “For me the international experience is pretty cool.”