Sexism and surprises fill Richmond woman's marriage to a Mustang

Tangerine Twiss had to restore the Mustang 65 1/2 convertible herself, despite knowing nothing about cars
Apr 1, 2021 7:30 AM By: Alan Campbell 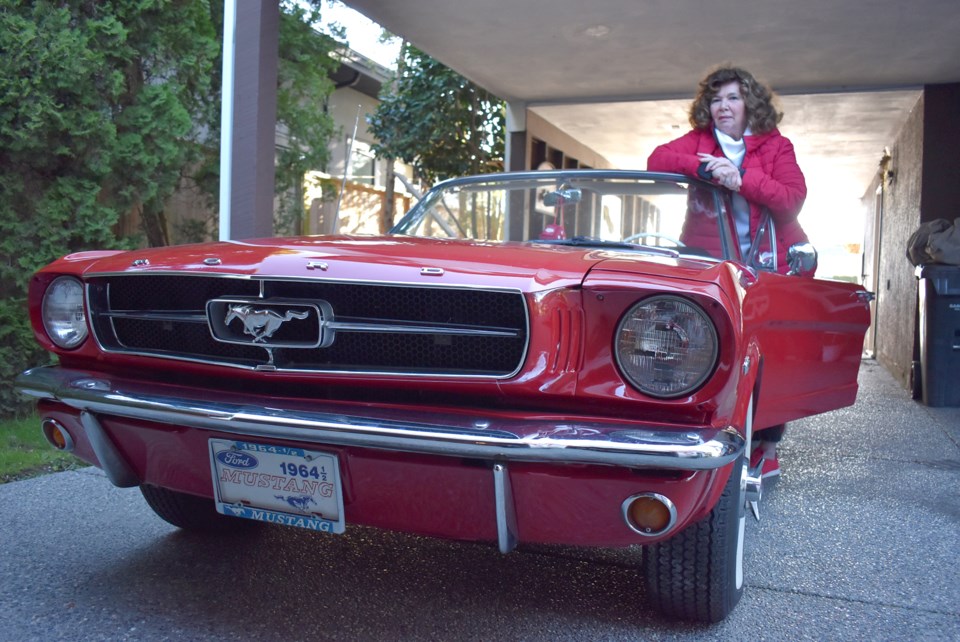 Tangerine Twiss restored this classic Mustang 64 1/2 herself, after buying it all beat up in 1977.Maria Rantanen photo

This is a story about a woman called Tangerine Twiss and a beat-up Mustang convertible 64 ½, which she bought in the ‘70s for $1,400.

It’s a story of a classic car which Twiss, now age 73, had to then “rescue” from a Richmond body shop in receivership.

It’s a story about a 20-something woman — with zero knowledge of cars or their repair — spending two years and thousands of dollars restoring the red Mustang herself, complete with a cream leather interior, hand-sewn with a Singer sewing machine.

And it’s a story about a woman who had to fight sexism at car shows, even having to put a man’s name down as the official owner, because the male-dominated environment refused to believe she was responsible for restoring the car to its former glory.

A former glory, no less, that won her the biggest prize of her car-showing career —  first place in the James Bond category at a Van Dusen Gardens event — her Mustang is an almost exact replica of the one used by the late Sean Connery in Goldfinger.

Oh, did we mention that Twiss, in her retirement, is one of Richmond’s marriage commissioners who marries couples in her Bridgeport Road backyard, with her Mustang often getting into the wedding photos.

It’s a story you couldn’t make up if you tried.

“The car was in rough shape, very bad. Someone had painted it an ugly blue, with a paint brush!” Twiss recalled.

“The original is Rangoon red. I repainted it candy apple red. It was a little lighter.

“I lost points (at the car shows) because they knew it was not the original colour.”

Looking back to the day she acquired the Mustang on March 28, 1977 — the same calendar date her son was born — Twiss recalled how she thought it’d be plain-sailing taking the car to a  body shop and saying “let me know when it’s ready.”

“It didn’t work that way. I had it towed to the body shop and told them to restore it to perfect condition. But the fella there drank himself to death. It went into receivership.

Twiss said she had to think quickly and “improvise” to get the Mustang and her paid-for parts back.

“Are you kidding? After doing all that work myself. I always wanted a Mustang convertible.

“I’ve taken it to car shows and will likely do so again once the pandemic is over.

“But it was, and still is, a man’s world. When the car was called a winner (in the past), I walked up there as proud as punch to get my prize, even though they thought it was owned by a man.”

Twiss’ other lifelong dream was to become a marriage commissioner, something she realized after she retired a few years ago from a long career at UBC, where she ran the international student office.

“I have my backyard set up as a chapel, especially for it,” explained Twiss, who actually officiated her own son’s wedding.

“Since the pandemic, more people have been getting married in my backyard, with a maximum 10 people, all masked up.

“I have a bubble machine there, flowers, I love it.”

Letter: Richmond pedestrians, drivers need to look out for each other
Dec 27, 2020 7:48 AM
Comments