To celebrate Pride 2016, TELUS is highlighting local leaders in the LGBTQA community who exemplify the power of inclusion and elevate the importance of diversity.
0
Jul 27, 2016 5:35 PM By: V.I.A.

To celebrate Pride 2016, TELUS is highlighting local leaders in the LGBTQA community who exemplify the power of inclusion and elevate the importance of diversity. We are absolutely thrilled to support their #ShareLove campaign and get to speak with Shanda Leer, a local personality who is best known for her excellent comedy and drag shows. 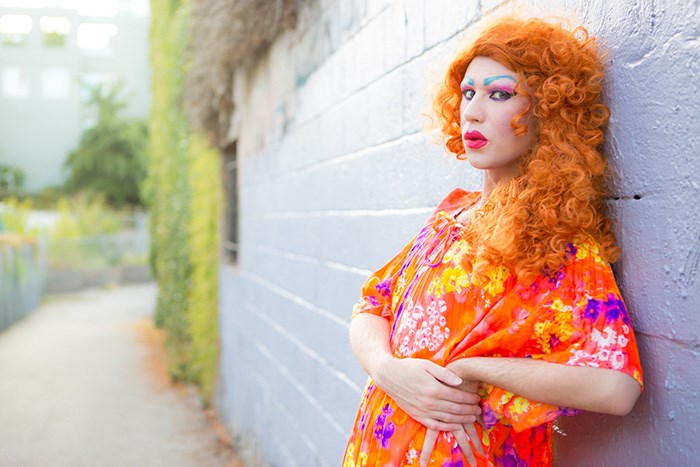 We talked to Shanda about how she got involved in Vancouver’s drag scene and the importance of drag to queer communities.

VIA: Hello! Could you tell us a bit about who you are and what you do?

Shanda: I’m Shanda Leer. I’m a certified horoscopologist for ION Magazine, a fashion consultant for You Know You Love Fashion, the Tipsy Aunt in Bratpack, a YouTube sensation, and monthly host of Studio with Shanda at XY. But mostly, I’m best at hosting, toasting, and ghosting.

VIA: What attracted you to drag?

Shanda: I’d say the international fame and fortune. Though, once I got into the swing of things, I genuinely love to make people laugh and have a good time. I can occasionally do that out of drag, but I seem to be at least 34% funnier in full face.

VIA: Could you speak to how drag challenges perceptions of masculinity and femininity?

Shanda: “Masculine” and “feminine” are inherent qualities in every human, but there’s a social pressure to live up to an ideal of one or the other depending on what your body looks like which is pretty lame. I like to celebrate — and especially mock things — I love about both traits. To borrow from RuPaul, drag is a mirror I can hold up to these boring, restrictive conventions and say, “Hey, take a look! There’s something more at play here, Henry!”

VIA: How did you get involved in Vancouver’s drag community? Are there any peers that you look up to? Have there been people that have motivated you or inspired you along the way?

Shanda: Hand to God, it was on a dare. After a soccer game with Out For Kicks, one of my closest friends (and fellow queen), Peach Cobblah dared me to enter the Pride Ball at The Cobalt in 2012. I got real tipsy, threw on a dress and a lip, took home the Butch Queen trophy that night — ever since, The Cobalt and everyone who works there has become a lil’ home away from home. As far as continuing inspirations, I’ve always been drawn to women who don’t put up with BS and say what’s on their mind. I’ve got a lot of women in my life I admire for that and a lot I’ve admired from afar. Oh, and Panti Bliss, of course.

VIA: What’s the biggest misunderstanding you think people have about drag culture?

Shanda: I’ve been lucky not to have run into too many people the past few years who aren’t familiar with the art of drag — because it is an artistic expression — but definitely starting out I encountered some folks who thought my drag persona was an expression of identity. I’m going to quote countless drag queens here with an oversimplification but, “drag is what I do, it’s not who I am.” Of course, I invest a lot of myself into it but at the end of the day (SPOILERS) I’m playing a part of my personality and creativity that might otherwise be repressed.

VIA: How can people be better allies to LGBTQA+ communities?

Shanda: Being an ally is an ongoing learning process and I’m definitely still learning myself — and I’m part of this beautiful community! Be open and listen, try to avoid “the stare” and if you’re really curious or stuck on something, ask a question. The worst that can happen is that person will say they’re not comfortable answering. Everyone just wants to be heard and accepted.

VIA: You’ve said in past interviews, “Drag is one of the only things that is ours, it is one of the few traditions that is just for us.” Could you elaborate on this?

Shanda: It’s definitely an outlet for many queer-identified people to say something they can’t put into words and before RuPaul’s Drag Race; you’d mostly find it only in gay clubs or the theatre. So imagine you’re a young queer kid who’s always felt a little out of place and when you visit your first gay bar, you’re presented with a 6’7” man in a sequined ball gown and hair up to Jesus, lip synching his heart out to a song like ‘Last Dance’ by Donna Summer. Girl, something’s gonna click and you’ll just know this performance is for you.

Shanda: I love that in all the years I’ve lived here so far, I’ve manage to keep meeting really interesting, really fantastic people, and I’ve built a lil’ West Coast family. And I love that I can go to a place like The Cobalt out of drag for karaoke or see some awesome bands, and then swing back on Saturday night in full drags and dance until my lash sweats off.

Huge thanks to Shanda for taking the time to share her story. Don’t forget to share your images and messages of love and acceptance through the TELUS #ShareLove campaign. Happy Pride!