Vancouver Park Board approves return of Skookum Festival in 2020

Following the inaugural event last September at Brockton Point, which saw more than 50,000 attendees over three days of music, art and food, organizers announced that the festival would be taking a year off to gear up for a return in 2020. 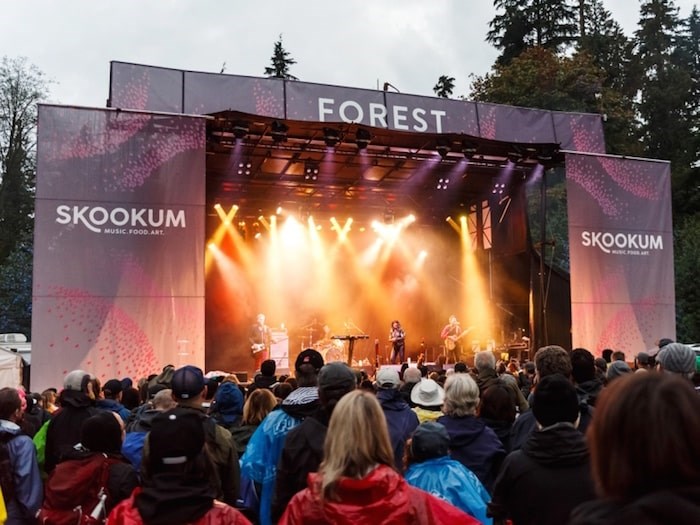 Vancouver Park Board Monday approved the return of Skookum Music Festival to Stanley Park in 2020. Photo by Jonathan Evans

Paul Runnals of BrandLive, the event production company behind Skookum, said this week planning for a 2019 festival would have had to start within weeks of the 2018 event concluding.

“Rather than rush things, we made a decision, it was a difficult business decision but it was the right decision because our lens here is a long lens,” Runnals said. “We want this to become a marquee event that lives in Vancouver for years to come, and we felt that in order to properly take and process everything we learned from the [2018] event, invite some further discussions in some areas… we made the decision to pause and not do a 2019 event.”

On Monday, Vancouver Park Board commissioners unanimously approved the return of the festival, adding it to the annual calendar of major special events.

While Skookum’s launch was deemed a success by organizers and park board staff, there were a few issues. In his report to commissioners, Octavio Silva, manager of business development, said there were more than 100 noise complaints over the course of the weekend, with most coming from residents in Coal Harbour, the West End and the North Shore.

“The majority of the complaints were mostly associated with music volume and lateness into the evening,” he said.

Silva also noted the need for more portable washrooms, additional turf protection and wider walkways between some of the stages. Silva said the issues were “pretty typical” of an inaugural event.

“We are quite confident that the event can be executed successfully as intended,” he told commissioners.

Runnals said since the festival wrapped, BrandLive has been analyzing how it went and looking at what could be done differently next year. He added that the company was not made aware of the noise complaints until the Monday after the festival concluded.

“It’s hard for us to correct action if we’re not getting feedback,”Runnals said, adding that there are measures that can be put into place, including real time sound monitoring at the outskirts of the park, to help mitigate the noise.

“It’s not so much about turning down the sound in the park, it’s about making sure the sound doesn’t leave the park and that’s all stuff that can be addressed through system design, through mitigation plans and through a better communication plan,” he said.

Runnals told commissioners he is confident Skookum organizers will be able to address any issues.

“I stand here as the guy that sort of hatched this thing from nothing into something, to say that we’re fully committed to continue the work with staff, with [First] Nations, with anybody that we need to, in order to address any concerns and in order to make sure this event is allowed to continue and is embraced in the way that we think it can be and, frankly, has been so far,” he said.

Silva stressed to commissioners that the return of Skookum has been endorsed by the Musqueam, Squamish and Tsleil-Waututh First Nations.

“I think we’ve always been adamant that the festival wouldn’t move forward without their consent,” he said.

From the outset, organizers aimed to involve, and recognize, the three First Nations as rights holders in Stanley Park. Thirty per cent of the programming came from Indigenous artists, there were kiosks installed explaining local history, people and connections, and a video played during the festival recognizing the territory and its history.

“We were very pleased by the way BrandLive made significant investments in integrated the culture of our local Nations into the event,” he said. “Stanley Park holds great important to the three local First Nations and we’re committed to protecting the sensitive areas within the park but we also understand the value that this event would continue to bring to our Nations’ artists by showcasing their talents on an international stage.”