Fifty years after Jimi Hendrix, 40 years after the Young Fresh Fellows and 30 years after Nirvana, Seattle is still a music town.
Jan 15, 2019 2:48 PM By: Grant Lawrence

Have you been to Seattle lately? Last weekend, I made my first trek to the Emerald City in too many years. The occasion was a concert with my band the Smugglers and Seattle rock legends the Young Fresh Fellows. I was shocked at the changes the City of Grunge has gone through in the years since I had last hung out in its music circles.

Grant Lawrence (second from left) and his band the Smugglers played the annual Seattle Pop Punk Festival along with the Young Fresh Fellows this past weekend. Photo courtesy Grant Lawrence.

Back when I was a teenager, the famed Seattle music scene that would change the world was just starting to break. It was the late 1980s, and Vancouver was often treated to the first touring tastes of soon-to-be-dubbed grunge bands such as Mudhoney, Nirvana, Tad and the Screaming Trees — all signed to the famed Sub Pop Records. The hairy, flannel-clad musicians would make the three-hour trek north to rock out in Vancouver venues such as the Town Pump, Club Soda, UBC’s Student Union Ballroom and the Commodore.

For my young band, it suddenly made a lot more sense to make the short, easy drive to Seattle rather than the epic, Game of Thrones-like 10-hour slog to Calgary. And so the Smugglers did, weekend after weekend, living up to our band name by slipping across the border in our rust-bucket VW van to play with the likes of Gas Huffer, Girl Trouble and Flop, in happening Seattle haunts such as the Crocodile Café, the OK Hotel, the Vogue and the Off Ramp. 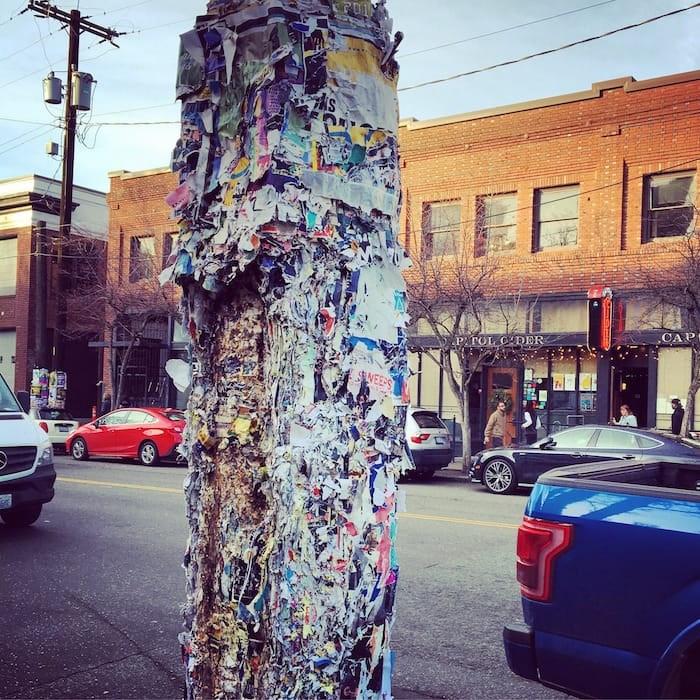 Seattle telephone poles are still plastered with gig posters, as if Facebook Events had never been invented. Photo Grant Lawrence

Due to what was likely sheer overexposure, the Smugglers eventually got signed to Seattle’s other “Pop” label: Popllama Products, home to such underrated Seattle rock legends as the Young Fresh Fellows, the Squirrels and, later, the Presidents of the United States of America.

The Smugglers motored up and down the I-5 so many times in the 1990s that when we were finally invited to return this month to play the annual Seattle Pop Punk Festival, I opted to take the enticing 26-minute flight down rather than battle the border and the Interstate.

Word to the wise: Flying to Seattle from Vancouver is dumb. When you factor in the time to and from the airports, along with check in, security and wait times, you actually spend more hours in transit than you do driving, not to mention the heavier carbon footprint. Most of my band members left Vancouver after me and arrived in Seattle before me, then proceeded to let me hear about it the rest of the weekend. 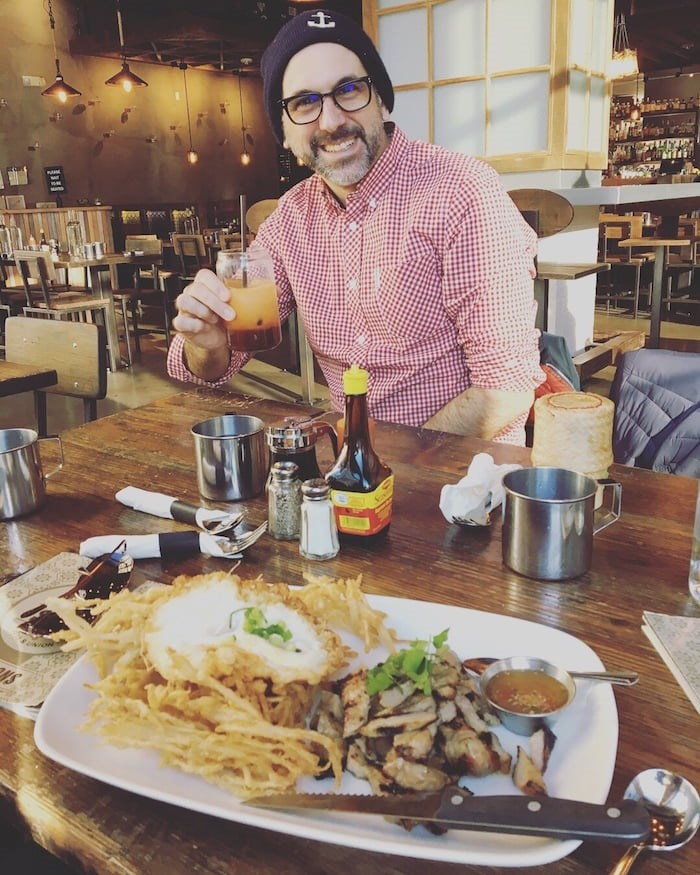 Man in the know, Frank Leone is down with Seattle’s dining scene. Photo Grant Lawrence

My first indication Seattle still identifies as a music town was in Sea-Tac International Airport. A famed local musician greeted me over the airport’s PA system:

“Hi I’m John Roderick from the Long Winters. Welcome to Seattle! I hope you enjoy these local music selections while spending time at our rockin’ airport.”

I heard a similar greeting from Duff McKagan, formerly of such Seattle bands as the Fartz and the Fastbacks (he now plays bass in LA band Guns N’ Roses). There was also a Pearl Jam poster exhibit. And this was just the airport.

Our concert was at a joint called El Corazon, which I quickly realized was a rebrand of the classic grunge-era club the Off Ramp. Besides the name, absolutely nothing had changed within the crusty venue’s black walls plastered with a million band stickers.

In the 1990s, the Off Ramp’s neighbourhood was a fairly industrialized area of low-rise buildings just outside of downtown, buttressed by the I-5 on one side and the Dog House, a notorious 24-hour diner, on the other. These days, somehow the dirty ol’ club remains, surrounded by glistening condo towers and new hotels. 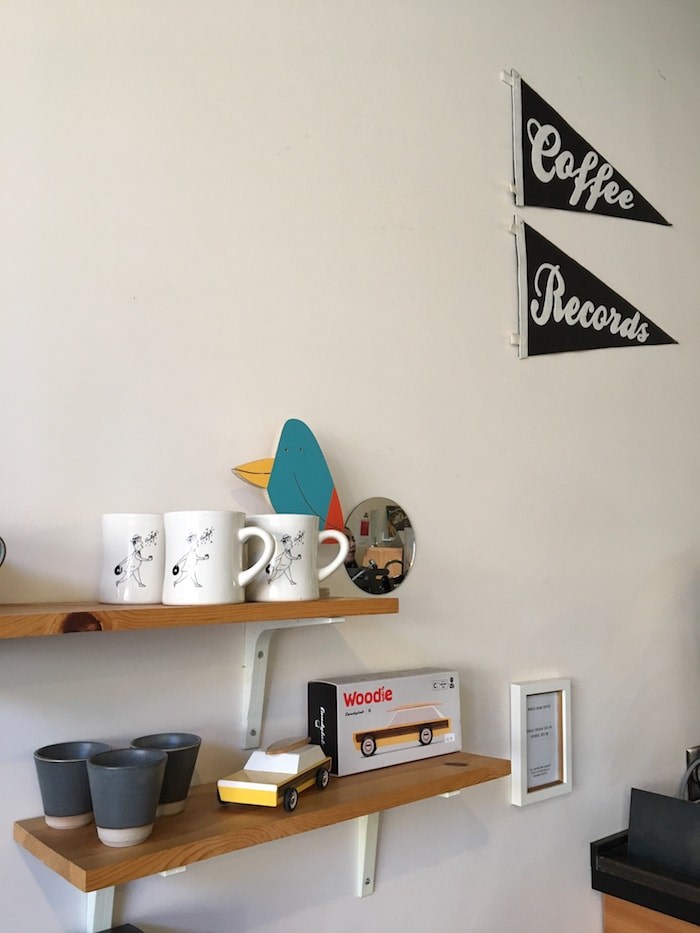 Porchlight Coffee and Records lives up to its name. Photo Grant Lawrence

For eats, we mostly traversed across the many bridges that cross the I-5’s eight lanes of noisy traffic that slice through Seattle like a dagger. On the other side of the bridge is the now utterly happening Capitol Hill neighbourhood, which in the 1990s was the cheap rent district and has now exploded into a hipster haven.

Luckily for me, my friend Frank Leone from New York flew in for the gig. Frank always knows the greatest eateries in any town (check him out on Instagram @ironsnax), and Seattle was no different. Thanks to Frank, we enjoyed the yummy industrial-chic Thai brunch spot Soi; General Porpoise, a charming hole in the wall that serves delicious handmade doughnuts; Central Smoke, an informal counter-serve Texas-style BBQ joint; and Nue, a bustling “global street food” café.

Next to Nue, you’ll find a really cool hideaway called Porchlight Coffee and Records, which offers exactly that. Keep going another few feet and you’ll find Old School Frozen Custard. In between the doughnut, custard and record shops is an endless froth of craft breweries. 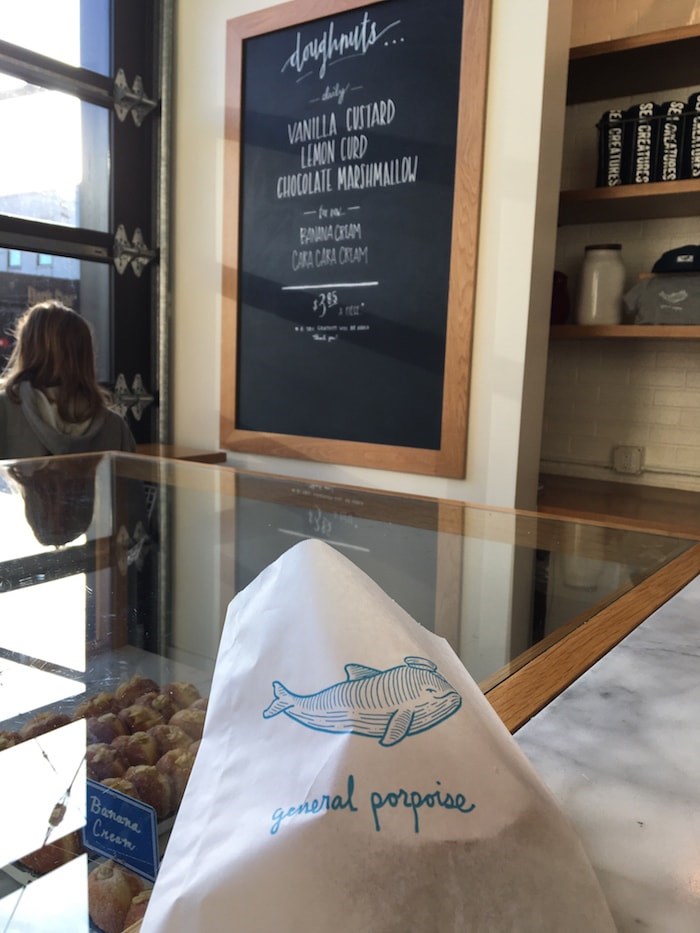