A bulletin that announced SFU is investigating a cabal of teaching assistants who are leaking exam contents and inflating students’ grades is fake news.
0
Sep 10, 2019 7:29 AM By: Cornelia Naylor

A bulletin that announced SFU is investigating a cabal of teaching assistants who have made “huge profits” by leaking exam contents and inflating students’ grades is fake news, according to the university.

A photo of the bulletin – purporting to be from SFU's student conduct office – began circulating on social media, including the Chinese language app WeChat, over the weekend.

The notice, dated Sept. 6, said the perpetrators would be “expelled and prosecuted by SFU” and students who paid the group to get better grades would be “held accountable.”

The notice urged students to “stay clear of TA Alliance or any kind of academic dishonesty.” 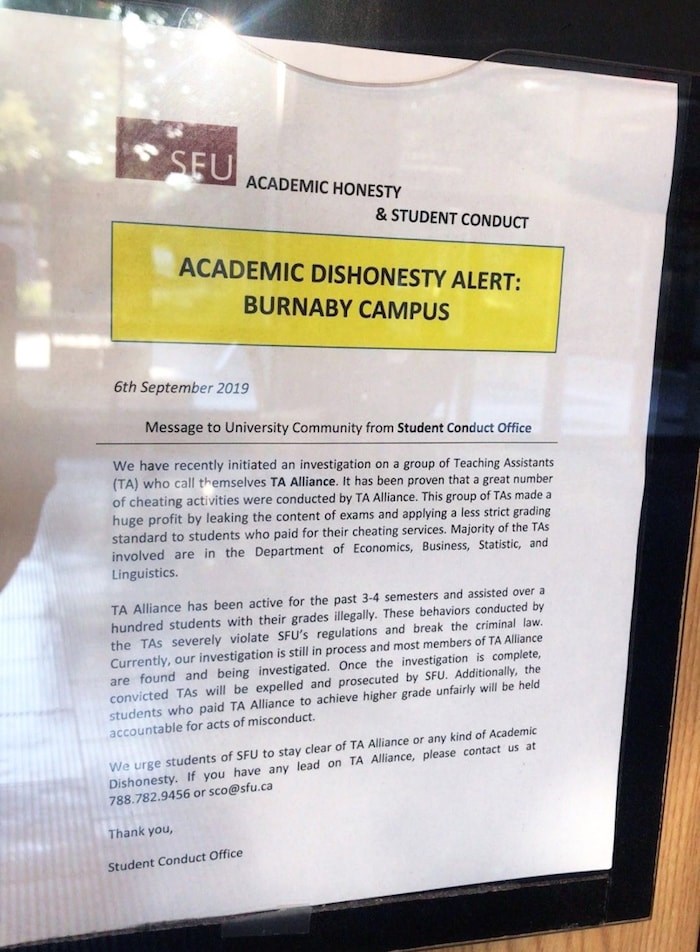 This notice that appeared around SFU’s Burnaby campus Friday is a fake, according to the university. Photo contributed.

The phone number listed at the bottom belongs to the student conduct office, but the staff member who picked up there said she knew nothing about the matter.

"These notices have been removed and we have notified SFU student groups and stakeholders of these fraudulent posters as well as campus public safety," she said. "Producing fraudulent documents is a serious matter and we are very concerned about this incident, as well as the claims within the document. We are investigating this matter, and anyone with information should contact SFU campus public safety."