THE OPENING is all about delving into the fascinating, quirky and wonderful visual arts in Vancouver.
Alex Quicho Nov 1, 2013 10:00 AM

Somber, sepia-toned, and dapper, the lone figures in Angela Grossmann's Small Crimes series peer out of their frames with an air of dignified tragedy. Based on mugshots of criminals incarcerated for minor crimes, these collage works were first installed at the Barrister's Lounge at the Provincial Court in Robson Square last month. On November 4th, the exhibition opens once again at another historic local courthouse: the Vancouver Art Gallery. Both are acts that Grossmann thinks of as almost subversive: she is returning these people to places of law and incarceration, not as criminals, but as art.

In the making for over 20 years, this suite of works showcases Grossmann's skills in tearing apart and recombining — in stitching lost histories back into narratives and characters. Composed of vintage papers and photographs, each piece reconfigured with beautifully unsystematic gestures: the deft rips, slices, and smudges that make was once discarded precious again. 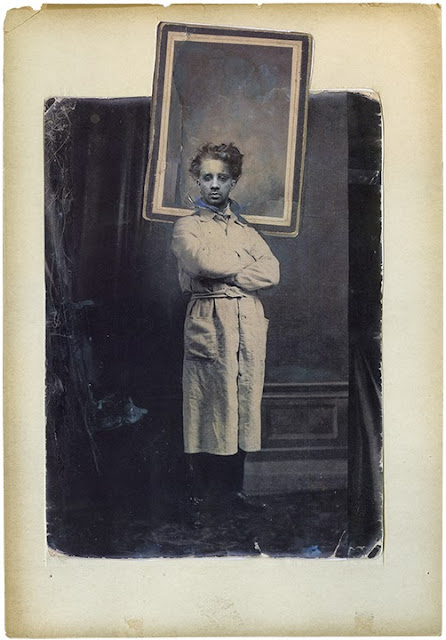 One particular tactic, the superimposition of two or three negatives to create unstable, compound identities, deviates from those of the previous, empowered works that Grossmann is known for. It's revelatory to hear Grossmann pinpoint this gesture as one subverts the authority of the documentary photograph. "I rather liked the idea of guilt and innocence: how do we know what's real? We're always mistaking identities," she says. "So I was mistaking my identities on purpose to question that process."

Though nowadays she culls her materials from a wide variety of shops and markets, she pinpoints the time she spent abroad as the source of her interest in found photographs. It's easy to imagine a younger Grossmann wandering spellbound through the European flea markets, hands alighting on the antique ephemera set out on tables and boxes. Unsurprisingly, her studio echoes the nature of these places, every surface piled high with wrapped scrolls and scattered arrangements of curios. "Living in Europe, you're surrounded by old things — things that existed before you were alive," she tells me. "I went to flea markets a lot and I always found old photographs that I didn't know what to do with right away. But I knew that they had this really incredible attraction for me — I felt a sort of power when I picked them up." 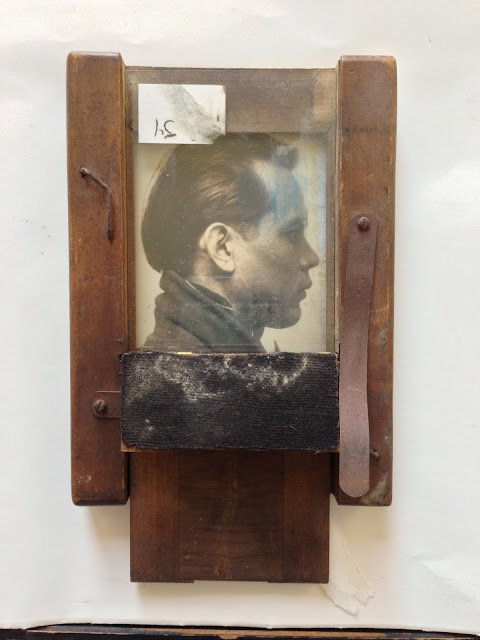 "I was back here for some show or other," Grossmann recalls, sifting through a sheaf of tea-coloured papers as if to enter physically into her memory of their acquisition, "and visited a secondhand shop that I always used to go to when I was here. It used to be on Pender — none of them are left now, of course  — but at the time, I'd always go in there to look at what sort of interesting things the proprietor had on offer. He had a really strong, but odd, signature taste — lots of war stuff — but every time I went in, I would find materials or pictures I could use. I hadn't been in town in a long time, and I didn't think he would recognize me or know who I was, but I went in and he said, 'Oh, I've got something saved for you.'

"He pulled out a folio to show me and I thought, this was very strange. It contained the original 4x5 negatives of mugshots taken in BC. Of course, I took the lot. I wasn't sure what I was thinking at the time, but I brought them back and began to read the files. The images were incredibly powerful and were very hard to look at. They all had this very tragic moment in them and they were very emotionally charged images." 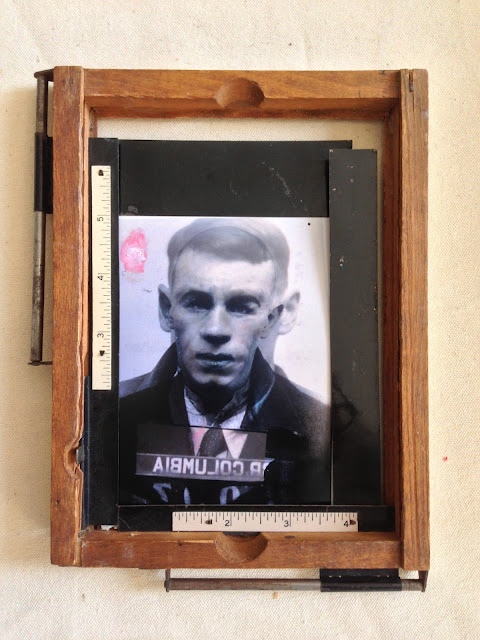 Surrounded by this accoutrement of petty criminals, Grossmann found herself in the strange position of attempting to undo the injustices that these figures endured. She found a great number of things to be outraged by in the files that accompanied the mugshots: catty, acerbic remarks typed in by a presiding officer only known as the 'Chief Keeper' who saw no harm in openly mocking his charges. Swept up in empathy for these men — some of whom faced incarceration simply for being homosexual — Grossmann spent time returning dignity and respectability to the spare, oppressive medium of the mugshot with small yet poignant gestures in collage. She would restore full heads of hair to those who were jailhouse-shaven, add rosiness to gaunt cheekbones, and take each figure out of their prison stripes to dress them in snappy suits and ties.

"Somehow, they've been swept into a family that exists in my art-making," she remarks when asked about the care and attention that she gives to characters who most often enter into her life through complete serendipity. "I'm very conscious of the history of these individuals because I really do take it so seriously. I don't use these photographs as just 'stuff'; I actually invest in the notion that these people are real. They might not be living, but they're real for me now. Maybe that's part of the idiosyncratic way that I live. I spend a lot of time alone in my studio, and because of that, the figures that I use in  my work become a part of the life that I'm living. I've been around these particular individuals for twenty-two years. I know them very well. I invented them, for the most part, but some part of them is actually here, with me." 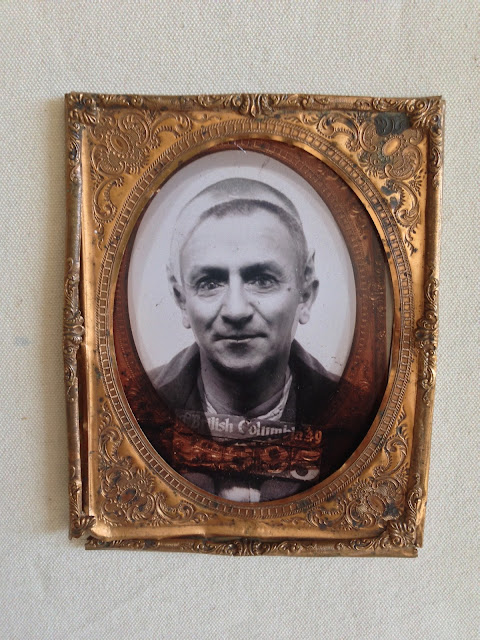 One can sense how Grossmann feels both protective over and indebted to these individuals, who exist as poetic touchstones and as symbolic representations of existing social systems. In our written correspondence prior to this interview, she mused deeply about "how we have and still do corral the unwanted away from us." She was especially preoccupied by  the inhumane state of prisons today — conditions so awful that hundreds of prisoners across the USA and its offshore territories have staged hunger strikes that continue on in the present moment. Though the people upon whom Small Crimes is built upon may no longer be with us, the conditions that they were made to endure persist as a waking reality for many prisoners today.

"There is so much brutality in prisons, it's shocking," Grossmann informs me. "We are now recognizing it. When architects are now refusing to design jails with solitary confinement units in them based on humanitarian reasons — you can imagine that these are terrible places. We can no longer ignore that as a civil society." 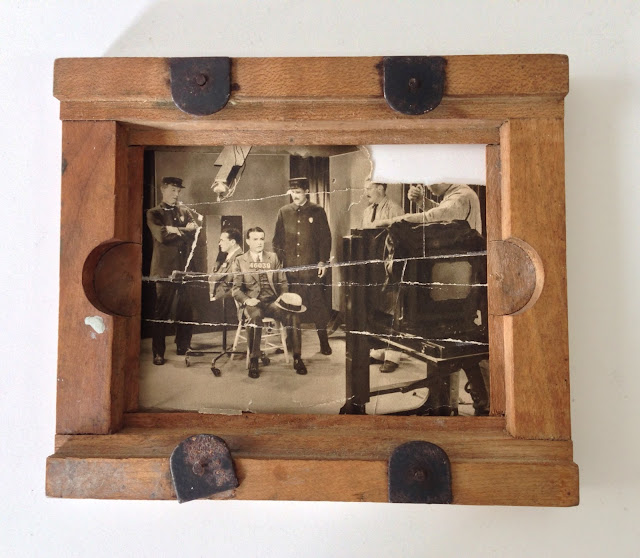 I wonder whether she sees these works — which, especially in their smallest door-hatch iterations, seem devoted and shrine-like — as memorials.

"They're not memorials because memorials are places that you go to remember [something that has happened in the past] and make sure that you don't forget," she counters without skipping a beat. "But these atrocities haven't stopped happening, so it's not a memorial of any kind. It is, in fact, a way to bring to attention the fact that these things continue to happen, but we ignore it or choose not to know. It's a way of making sure that people do know, I suppose. That's as far as the political ideas of this work go."

Angela Grossmann will be giving an artist talk at the showroom on Tuesday, November 5 (Guy Fawkes Night) at 7:00 pm. The Art Rental & Sales Showroom is free and open to the public on weekdays, Monday to Friday (10 am – 5 pm).

Get in touch with Angela Grossmann.