The Opening — This Week's Picks

THE OPENING is all about delving into the fascinating, quirky and wonderful visual arts in Vancouver.
0
Nov 8, 2013 3:48 PM By: Alex Quicho

Though Vancouver's art scene is famously labyrinthine, the Opening's new monthly feature will help you navigate the wilds with our top three picks of the moment. In this edition: Kitsum Cheng & Jenny Heishman, Howie Tsui, and Walter Benjamin.

As a cohesive exhibition, Searching for Land is the perfectly in-tune long-distance correspondence that your high school penpal never was. Cheng and Heishman's correspondence, which spanned oceans and months, sought exactly that: the similarities in each other that could be built into a collaborative body of work. The result is a charming, precarious arrangement of light colours and spare figures that exude — if not a literal connection to nautical themes — a sense of safe moorage: of calm and relief. 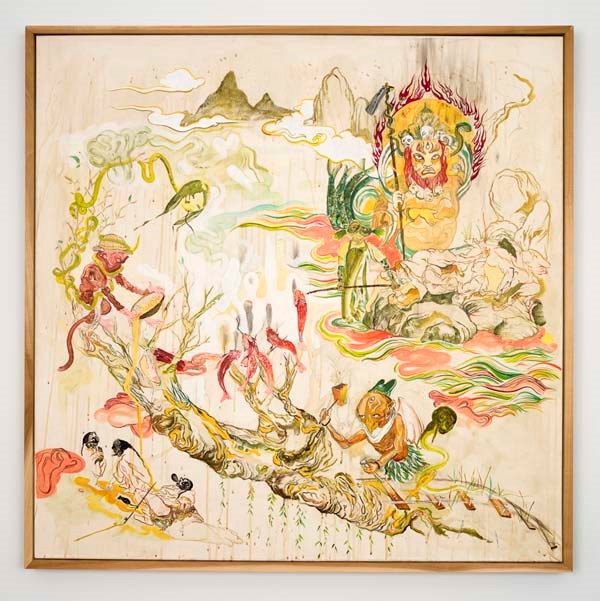 The ever-prolific Howie Tsui's latest offering, Celestials of Gold Mountain, attempts to subvert the problematic yet widely-accepted portrayal of early Chinese immigrants as nondescript, victimized, and hapless labourers by portraying them as mythic beings. "Conversely," Tsui adds, "these exaggerated otherworldly depictions may further perpetuate the view of this ethnic group as a monstrous and mysterious other." Bend your head around Tsui's richly-coloured, chimerical works at WAAP — a humble apartment space that has become one of our city's most written-about and critically acclaimed galleries to date. Seemingly immortal philosopher, examiner, and patron saint of art school smarts Walter Benjamin releases another folio of posthumous writings at the Or Gallery bookstore tomorrow afternoon. Benjamin, whose lush particularities, stormy demeanour, and tragic end all continue to exert their hold over contemporary imaginations the world over, will also be present at the event by way of a screening of 'Mondrian '63-96', a lecture that Benjamin delivered (also posthumously) at the Marxist Institute in Ljubljana.