THE OPENING is all about delving into the fascinating, quirky and wonderful visual arts in Vancouver.
0
Sep 19, 2013 6:14 PM By: Agnes Wisden 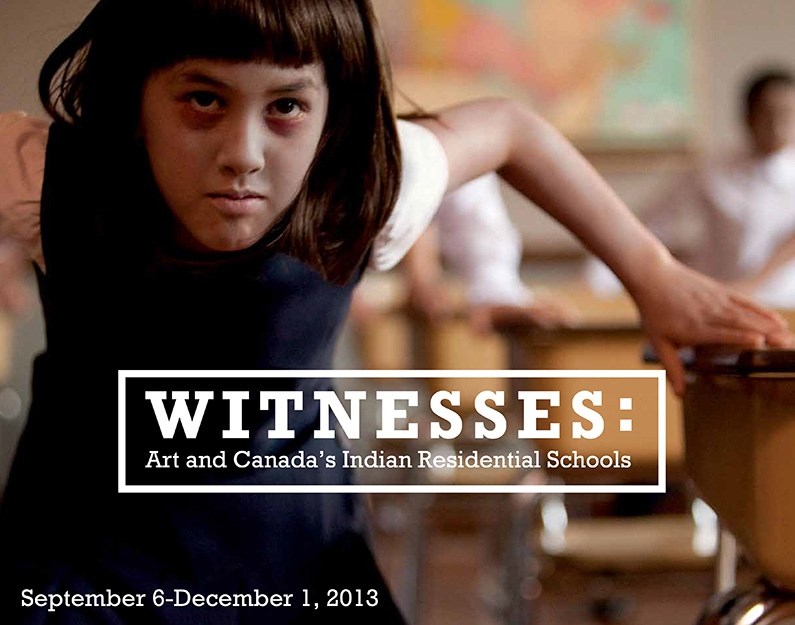 What brought the exhibition of contemporary First Nation's art to the Morris and Helen Belkin Gallery like Witnessess: Art and Canada's Indian Residential Schools? The idea was formed while at UBC's First Nations House of Learning concerning the topic , Dialogue on the History and Legacy of the Indian Residential School. The exhibition developed from this meeting to address the long conflicted history that all people who live in Canada share. It's goal was to present a broad range of ideas and experiences in relation to the Canada wide Residential School System.

Recognition and listening are fundamental parts to any form of dialogue, and in this simple act is what can lead to understanding. Throughout the exhibition I was effected by the emotions present, and the raw reality conveyed in the well laid out pieces throughout the gallery. I was struck at how Canada's recent history had a relationship like this with indigenous people for over 130 years. With the first residential school opening in 1870's and the last closing in 1996. The exhibition made visible the multi generational and cross cultural history that has caused such divides within Canadian society.

Upon entering the architecturally open wall style of the gallery space, I chose the first room which contained a series of silhouetted school girls on small cards stacked and in rows on the wall . A work by Fay HeavyShield, titled Numerous, had me looking closer at the multiple rows of the exact same silhouette. What became revealed was the presence of black numbers embossed onto them. HeavyShield remembers being assigned numbers and recounts being able to remember the number of the children and yet not their faces. Reflecting well in what it means to lose identity in such formative memories as the numbers disappear into the silhouettes so subtly. 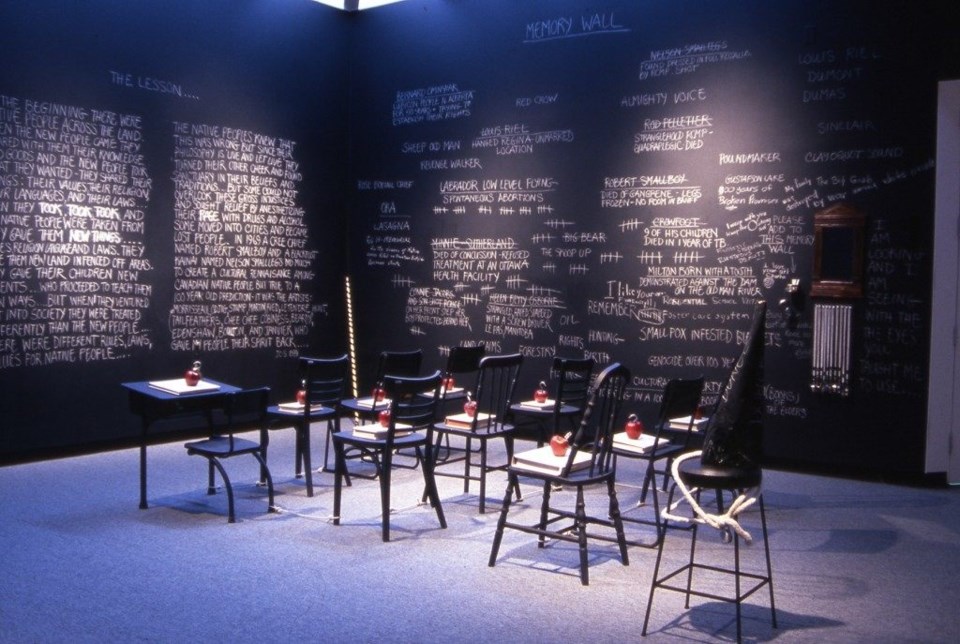 Adjacent is The Lesson, a powerful installation by Joane Cardinal-Schubert that was originally a performance piece made in 1989. Large chalk board walls and nine historically accurate desks, that are facing away from the open space of the gallery, makes you look towards the collaboration of written voices in the ideas of those who experienced residential school. The classroom being the place where both the religious and governmental systems sought to impose in the upbringing of indigenous children. I was able to walk through the small desks and notice the details in the wood, the red apple placed on each seat, and that was then shaded in the domineering nature of the black chalk board.

The loss of language is what Rebecca Belmore's highlights in Apparition, as her video installation has her sitting facing us with a piece of duct tape on her mouth. Calmly, she takes the tape off yet remains mute. Here she looks out at how languages have eroded because of the schools, and with it the long history of learned traditions and wisdom that all indigenous cultural groups in Canada are trying to recover. As she sits voiceless, she then slowly disappears before emerging again as the video replays.

I went to the other parts of the gallery and began to see there was symbols of integration and renewal. One being Beau Dick's work The Ghost Con-Fined to the Chair, which brings a former student's chair from St. Micheal's Residential School, and then gains through re-purposing a treasure box design. Sitting on the chair is the Indian Act and a ghost mask, which is lined with cedar boughs and is the shade of copper that blends well with the red vinyl of the chair. A sign of defiance in identity, and  is presented in the round at the gallery. 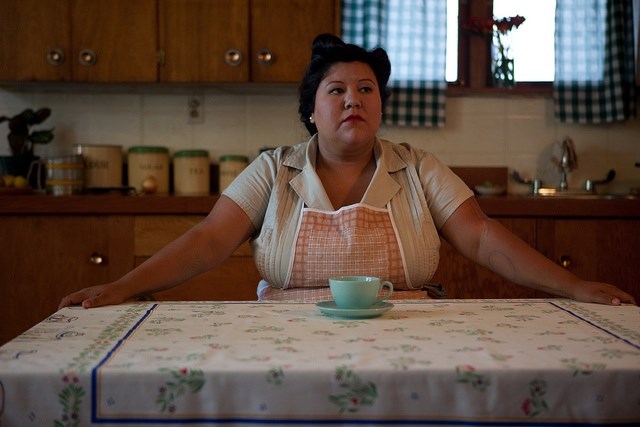 Following the more playful approach is also Lisa Jackson's cinematic short musical Savage, which is placed on the opposite side of the collection of work in the gallery. Taking a seat into the theater setting unfolds as the performance artist, Skeena Reece, who also has a powerful video work in the gallery called Touch Me, sings in Cree as the character of a 1950's mother who has had her child taken away. Colorfully rich shots and a choreographed dance by gaunt children at the end of the video stands alone as a different way to digest the representation of residential schools. After having viewed the moving and overwhelming work throughout the gallery, I found this movie short to have somehow lifted me above remorse and pain. It succeeded though as being able to still remind me of the darker part of this ongoing history.

Being raw and awoken while leaving the gallery did I pass by Cathy Busby's work, WE ARE SORRY 2013, situated very close to the Belkin Gallery at the Koerner Library. Combined with a pamphlet explaining how the rising number of government apologies has resulted in unscrupulous and deep funding cuts to such things like Aboriginal Health Care, and other foundational organizations that are meant to promote and support indigenous rights, is a billboard on the outside of the Library with a quote from the 2009 apology from the conservative leader Stephan Harper. Explaining through the use of historical facts how one can and must be wary of government mandates and be wise to the actual sincerity in their actions.

What makes this exhibition so powerful is the broad spectrum presented here. There was not one emotion, perspective, or idea that replicated each other as each artist contributes the honesty that they can and how that honesty related to the subject. It also becomes aware how it is a collaborative effort to acknowledge respectively this past , and move forward as a society of diverse people. 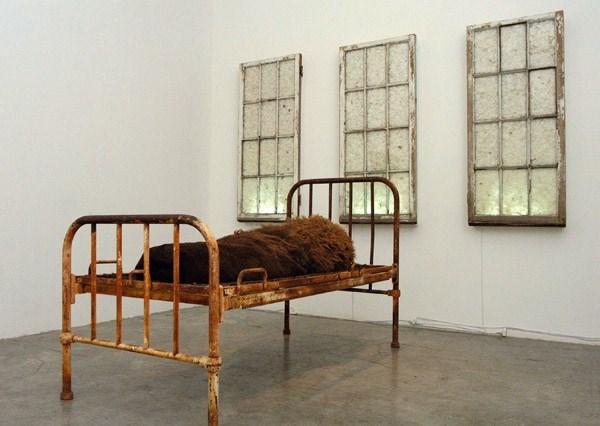 VIA: During the curatorial decision making process, how did a team of people select the work for this Exhibition?

TH: In the beginning there was a very collaborative approach and there where many names presented by the team members who had a lot of experience with First Nations Artists. It was important to do a survey type of show, and we wanted to represent artists who have done a substantial amount of work to this topic. A number of artists were considered and we also had other people come to us. We wanted many voices, like Gina Laing's inclusion, which shows her body of work created during a healing program.

VIA: How can the history of the institution, like one of an art gallery on a University campus, be a space that can be apart of a reconciliation process?

TH: Contributing universals is an important one. The education possibilities are strong here, and the work with collaborators from other departments, like the Faculty of Education and the Faculty of First Nations Studies. Here the curriculum can recover the exhibition and there is interest in extending the life of the exhibition. Also, the Morris and Helen Belkin Gallery has a long history of exhibiting social justice shows, and the director Scot Watson, has a long history of exclusively contemporary First Nations art shows. This then put the exhibition within the history and mandate of the Belkin. Thinking more broadly of institutional participation of addressing the problem of residential schools and history than the government mandate of the Truth and Reconciliation Commission. The gallery wanted to participate outside the Truth and Reconciliation Commission . We made the situation outside of funding that is independent, to have space for conversation concerning more difficult questions.

VIA: How do you find art can act as a facilitator to the inclusion of a shared narrative?

TH: Obviously our educational program extends to a wide community of people by including non- indigenous people as well. Sandra Semchuk was artistic partners with James Nicholas. Part of their practice was the settler including culture in Canada. Sandra Sechuk's importance as an artist was of being aware of settlement representation of colonialism and explore the mutual understanding of representation. Cathy Busby's work as well addressed social justice issues that can take the conversation further about indigenous people .

VIA:  How can artistic representation explain real events such as the Indian Residential School System?

TH: The gallery is safe in some regard, as a space to express and discuss. But not all art has this, and it was seen how there there was a lot of raw emotion at the artist's talks. Art takes the work, which we saw in action, and allows people who are able to spend time be affected by the issue through non verbal communication. The effective quality of art might raise emotion more visually, but its a way of raising the issue emotive without so much distance. The accounts of the abuse when you are here is described and is a challenge to make that quantifiable. So the visual registers it in a different way. There's emotion in the exhibition and movement, and takes it to a new level of engagement.

Having opened just before the Truth and Reconciliation Commission came to Vancouver this month, is the current exhibition at the Morris and Helen Belkin Gallery, titled Witnesses: Art and Canada's Indian Residential Schools. Running from this September 6 to December 1, and located in close location to the Museum of Anthropology.