The Pacific Salmon Foundation held it's 25th Anniversary Gala Dinner and Auction Wednesday night at the Vancouver Trade & Convention Centre and I had the pleasure of donning a tie and attending along with more than 500 other supporters. 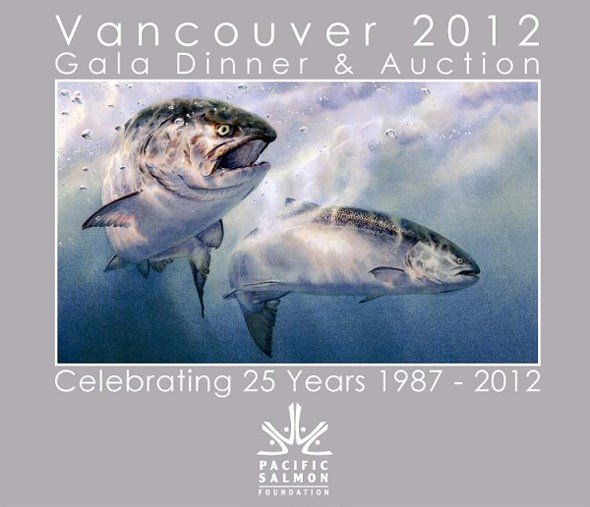 The Pacific Salmon Foundation held it's 25th Anniversary Gala Dinner and Auction Wednesday night at the Vancouver Trade & Convention Centre and I had the pleasure of donning a tie and attending along with more than 500 other supporters. I've told you about them before but in case you don't know, every year this incredible Vancouver-based foundation puts millions of dollars towards projects that help ensure the future of native salmon in Western Canada.

I'd never been to one of their galas before so I wasn't sure what to expect but I knew it would be a great time. One of the pleasant surprises of the night was Tony Parsons' entrance, fresh off this salmoned-up Helijet and into the hosting position! 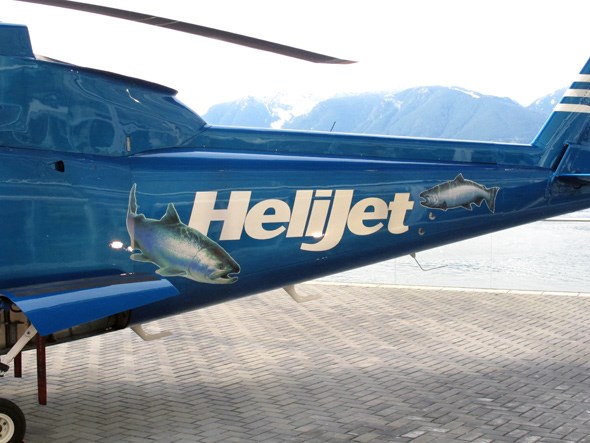 Tony welcomed us all and then talked briefly about the Foundation, passing the mic to PSF President, Brian Riddell, so he could thank everyone and talk about the past, present and future of the PSF. And then the biggest and most awesome surprise of the night came when Chuck Jeannes, President & CEO of Goldcorp, delivered a speech announcing that his company is donating $1,000,000 over the next 3 years. This will be the single largest corporate donation made in the Foundation’s history and will mostly help address a funding shortfall that occurred due to the BC Living Rivers Trust initiative expiring last year, leaving the PSF with a $2,000,000 annual gap in their funding to make up for. The foundation reports they typically can only fund about half of the good salmon projects they get asked to support, and the Goldcorp donation will also be used to address that un-met need. This is an unprecedented give on Goldcorp's part. Very awesome, and I hope that we see more corporate donors stepping up like this in the future. 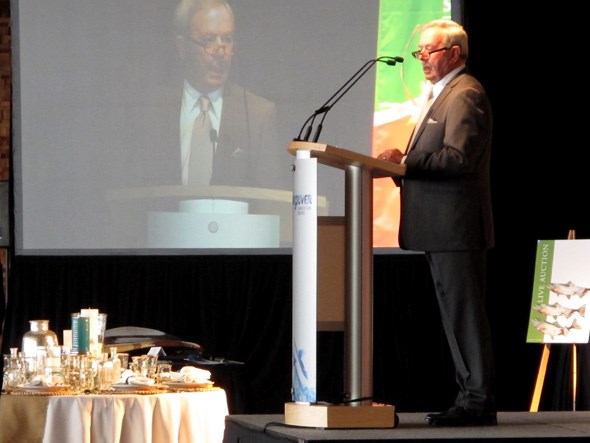 Before Tony gave the mic over to the auctioneer (in fact before Tony even arrived), we had an opportunity to peruse items in a silent auction that filled tables throughout the room. From fishing rods and reels to sweet pieces of artwork like this sculpture below, many generous donations of goods and services were made so that supporters could bid on them and help the Foundation raise funds. 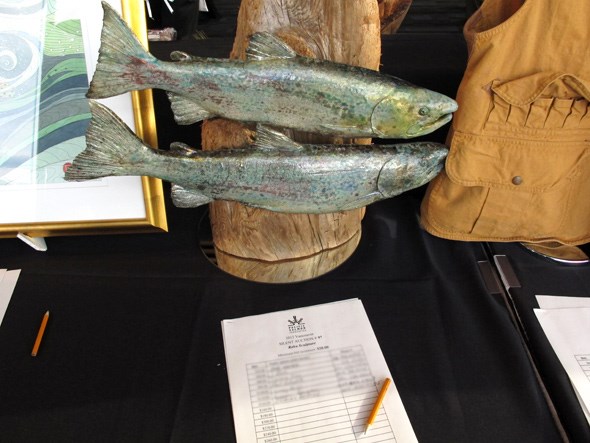 In the silent auction was also this sweet woven pillow set. One of my favourite items. 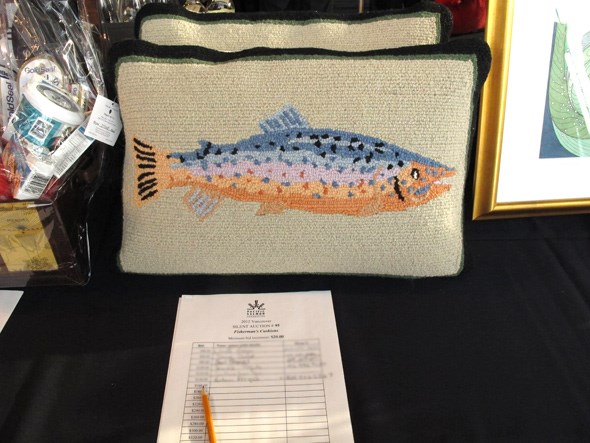 My absolute favourite item in the silent auction would have to be this framed collection of every DFO Salmon Conservation Stamp ever released. If you've ever fished for salmon in BC (or you watched MY CREATIVE MORNINGS TALK) then you'll recognize these as the stamps you buy to put on your license in order to keep salmon you reel in. A great deal of the money generated from the sale of the stamps each year goes directly back into the PSF – more than $6 million since the stamp was created in 1989. 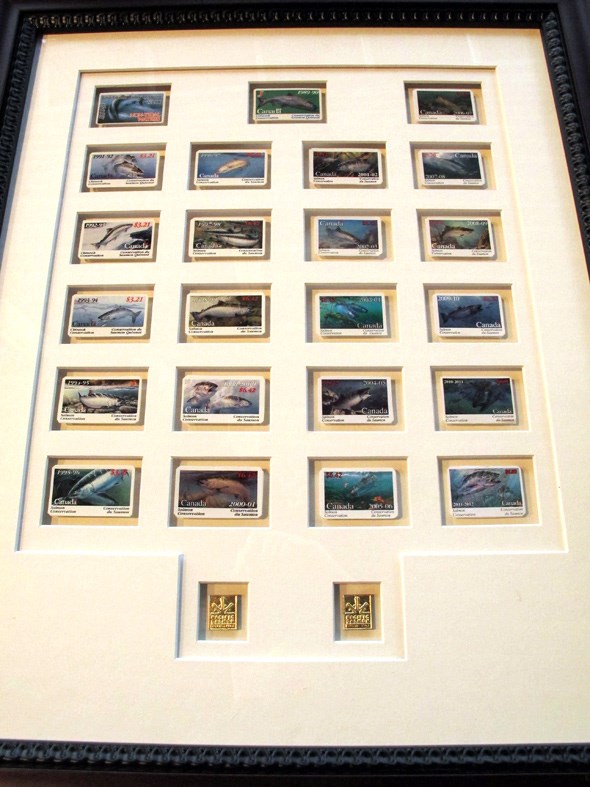 Big ticket items in the auction handled by professional auctioneer Greg Rollo with Richie Brothers Auctioneers included a trip to Langara Fishing Lodge in Haida Gwaii, many other incredible trips as well as tangible items like a Laird paddleboard and a totem pole. Yes, a totem pole! 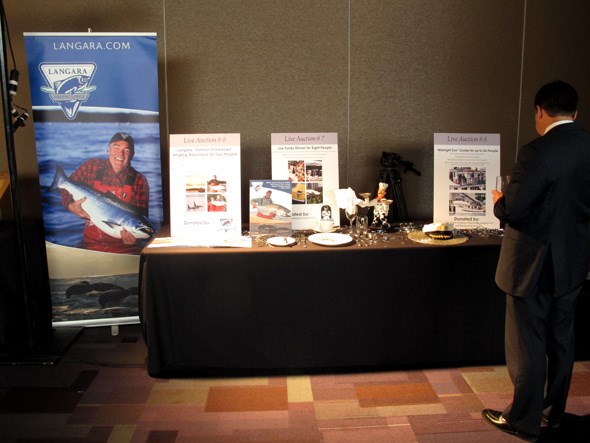 And of course the dinner itself was absolutely delicious, and of course it was supplied by the aforementioned sponsor, Goldcorp. Apologies for not shooting any photos of the meal we enjoyed but I was busy... well... enjoying it! Here's an overview of the crowd to give you an idea of what the room felt like at least. 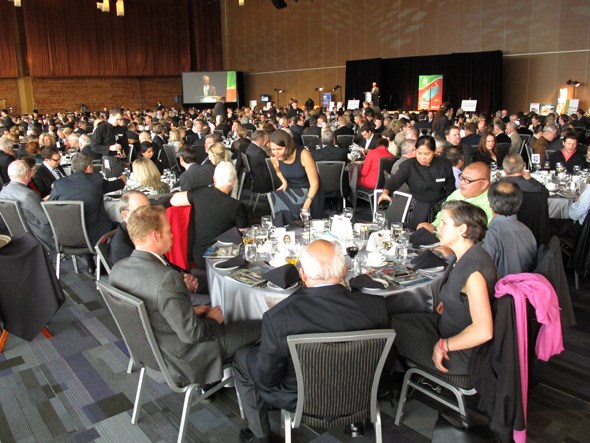 And last but certainly not least, another surprise of the night! The PSF's Brenda McIntyre got up on stage and thanked their over 30,000 volunteers as well as their unsuspecting (and generally shy of praise) board of directors (pictured below before dinner). While they need a generous amount of cash to work on restoration projects and to keep their organization afloat they simply would not exist without the help of a town-sized group of volunteers who should be applauded. 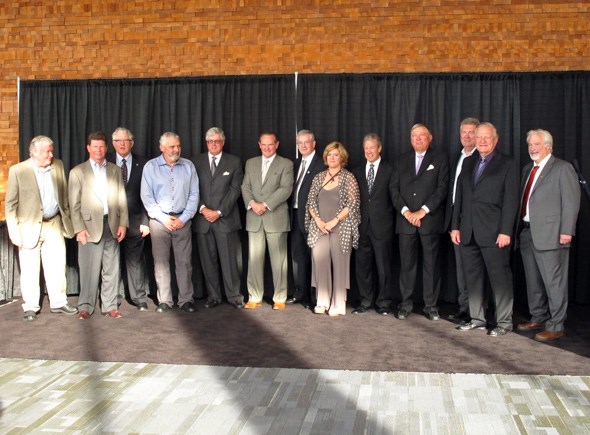 Learn more about the Pacific Salmon Foundation at PSF.ca and stay tuned as I'll be posting a fantastic video that they produced for this event shortly. Also, I managed to squeak in an extra special 50 Coffees chat during the gala, so watch our for that as well.