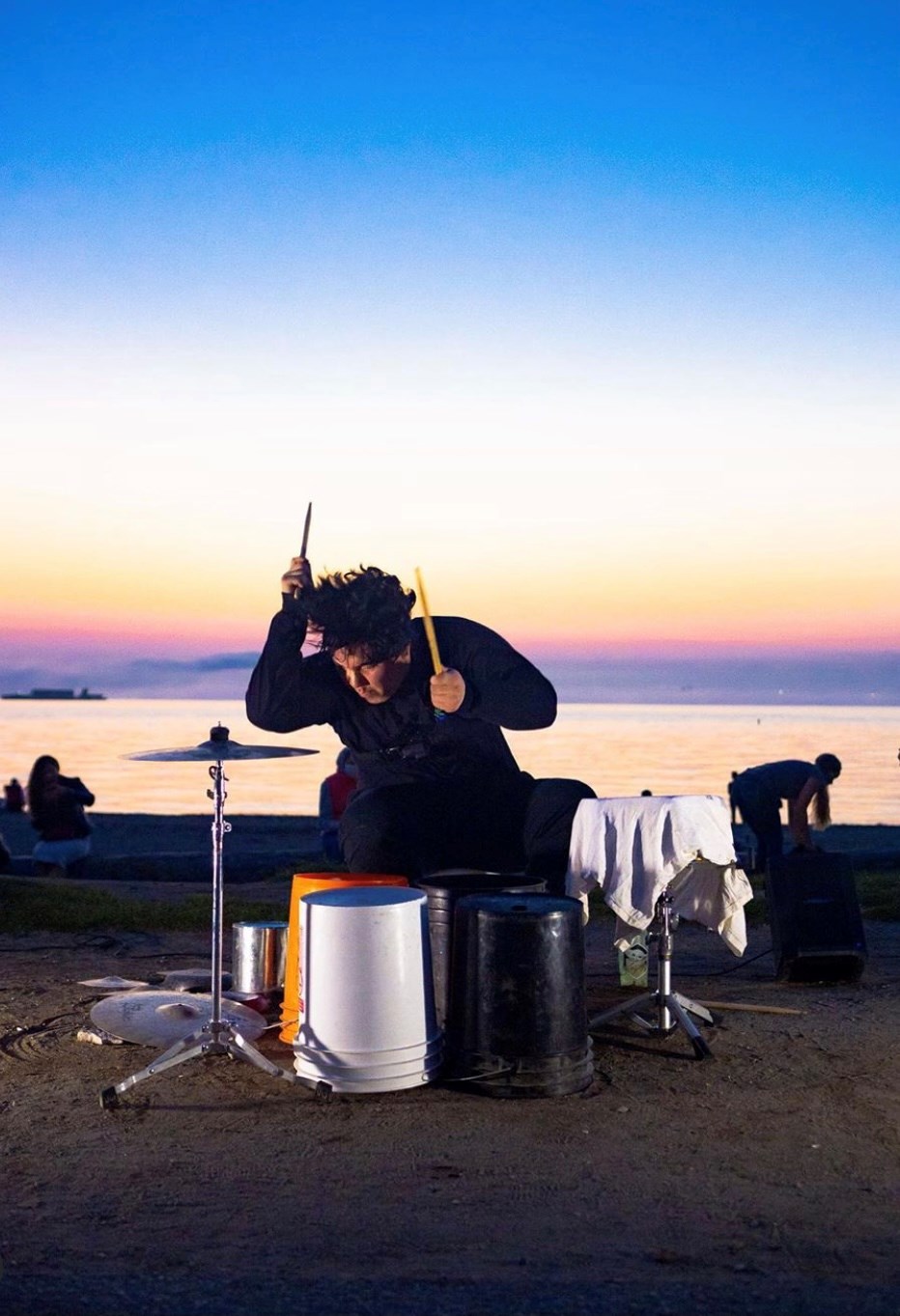 Terran Eason has been drumming since he was 13 and dreams of sharing his talents on Canada’s Got Talent this year. David Granneman

The best street performers will make you stop and stare a while and Vancouver’s Terran Eason is one of them.

Born in Vancouver, Eason was raised in South Korea where he started to learn the drums at 13 years old. Over the years Eason played in punk rock and heavy metal bands and learned to DJ, but he wanted something more performative. When looking on YouTube one day for ways to incorporate music with his drumming he came across a street performer beating on some buckets and the rest is past and present.

Eason moved back to Vancouver three years ago and started performing nearly a year ago before the coronavirus (COVID-19) pandemic hit. The pandemic slowed his performances but with restrictions easing he has taken his setup to the beaches at Kitsilano and English Bay to entertain hundreds of music lovers that gather around his makeshift drum set. Between the music, Eason’s fast-paced drumming and his “lightsaber sticks” his performance is quite the sight to behold.

“It’s both the visuals and music incorporated,” Eason said in a recent interview with Vancouver Is Awesome. “That's what people will be more interested in and there are not many street performers here in Vancouver so I think that's why it stands out a little bit more."

In Eason’s early performing days his set would include kitchen items like frying pans in the stead of cowbells and other construction site materials. Now though he has found his "ultimate setup" which includes a variety of buckets a snare drum, some frying pans and cymbals which he keeps on the ground.

Eason’s street drumming also allows him to incorporate his DJ skills. The experience comes in handy when arranging music to fit the crowd’s vibe to turning his snare drum upside down to mimic a record-scratch sound.

His success as a street performer has translated to the more lucrative and less back-breaking job of teaching drumming through private lessons. Eason says he has 10 students learning from him now, some of whom were inspired by his outdoor performances.

Keen to share his skills, Eason has big plans for the future.

"Just to see how far I can go and I would really like to someday go across Canada or go to the U.S. to perform as well," Eason said. "There's Canada's Got Talent coming up soon so I'll be applying for that."

"Right now I just want to share those kinds of good memories and good times with people," Eason said.