VIDEO: All this B.C. opera singer wants for Christmas are his three front teeth

A fainting spell which knocked out Taylor Fawcett’s three front teeth this summer could have left him feeling down in the mouth. Instead, the aspiring opera singer decided to have a little fun and put his own spin on a Christmas classic.
0
Dec 13, 2018 4:18 PM By: Louise Dickson

A fainting spell which knocked out Taylor Fawcett’s three front teeth this summer could have left him feeling down in the mouth.

Instead, the aspiring opera singer decided to have a little fun and put his own spin on a Christmas classic. 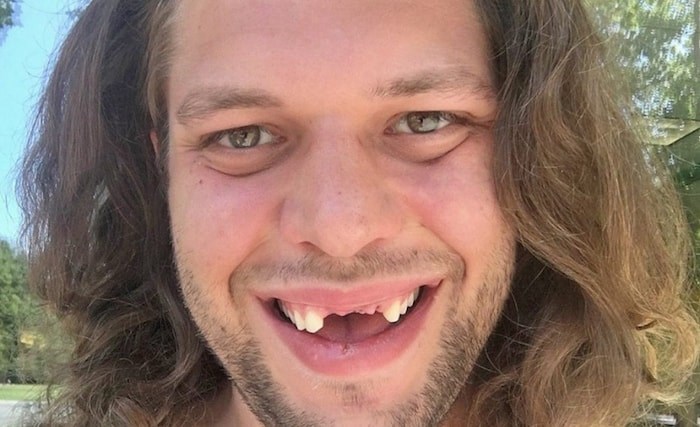 Fawcett sang and recorded All I Want For Christmas is My Three Front Teeth as a way to raise some money for the hefty dental bills he’s facing. The video can be found on his fundraising page called Fix Taylor’s Face.

“When the Christmas season rolled around and you hear all the same songs again, suddenly it just hit me — this is the only time in my life I’m going to be without these teeth at Christmas time. And I’m a musician,” Fawcett said Wednesday.

“I could do this song and it could be really funny and then it could also bring my fundraising efforts to different people.”

A native of Edmonton, Fawcett, 28, has been living in Victoria since the fall of 2015. He studied singing privately for two years, then finished the first year of his master’s degree at the University of Victoria this spring.

He was rehearsing Sweeney Todd with the Blue Bridge Theatre this summer. On July 31, the day before a dress rehearsal, Fawcett fainted at a bus stop on Johnson Street near Douglas Street. People nearby called an ambulance. Staff at the Access Health Centre rushed to help and took care of everything, he said.

“I broke my nose and knocked out my three front teeth, one of which was already an implant. Facial trauma is something I have a history with, which is absurd and funny,” he laughed. “The first implant for my front tooth was from playing basketball as a teen.”

When he regained consciousness, Fawcett’s first thought was that the Blue Bridge Theatre would have to get someone else.

“My second thought was: ‘Why on Earth did this happen and I’m not going to be upset about it.’ There’s nothing I could have done to anticipate this and I’m going to try and have a good attitude about it. I’m not going to waste any effort being upset.”

From the moment it happened, Fawcett realized his recovery was going to be expensive. He decided to take a year off school, return to Edmonton and live at home.

“It was just one of those things that happens in life. At the same time, in the back of my head, there was also the humour of it all. I’d gone and knocked my teeth out again, which I find kind of funny,” he said.

Who knows where his recording of "All I Want For Christmas is My Three Front Teeth" will lead?

The lyrics to the original song recorded by Spike Jones and His City Slickers in 1948 are pretty silly, said Fawcett, who’s trying to capture that in his own version. The singer has added his own twist inserting two tenor arias, one from Mozart’s Magic Flute, the other from Puccini’s Nessun Dorma, into the chorus.

So far, the fundraising campaign has raised more than $8,000. Fawcett is trying to raise $15,000 to pay for X-rays, implant placements, prosthetics and medical facility fees.

His dental surgery has been scheduled for Christmas Eve. The surgeon will remove the old implant and replace it with two new implants. The surgery requires a bone graft from his hip.

Fawcett hopes to return to UVic next fall. He’s also planning a recital tour in Alberta and B.C. to express gratitude to those who have supported him.