“Comedy is tragedy plus time.” It’s been said many times by many comedians. I believe the original usage dates back to the great Carol Burnett.
0
Nov 3, 2010 11:00 AM By: Graham Clark

As I write this, Diana Frances is somewhere on the open ocean. She is touring with The Second City’s cruise ship show. I check in every now and then, which means to me, the world of Diana Frances is ever changing. I am not implying that these changes represent a lack of focus- it is quite the contrary. Diana is the type of person in a comedy community that goes out and makes things happen. She is a person who balances the show with the business. This by its nature means having to change with the industry.

In the time I have known her, Diana has worked as an improviser with Urban Improv, a sketch writer and actor with Canadian Content, a writer for This Hour Has 22 Minutes and The Hour with George Stroumboulopoulos and run a corporate comedy business called Rock Paper Scissors.  I only use the phrase “in the time I have known her” as a way of acknowledging that this is a fraction of an impressive and ever growing resume.

On stage Frances can run with the boys when it comes to the risqué and can play the innocent all in one show.

The times I have been lucky enough to work with Diana, it is always with awe that I see how fast she can integrate into the work environment and begin to contribute as only she can.

Frances has worked in all different levels of entertainment and was a singular force for the west coast in her participation coordinating the Canadian Comedy Awards.

I look forward to my next meeting with Diana as it will most certainly reveal a new conquest in the comedy world, another example that art and commerce can work in some kind of harmony.

If you want to know more you can go to:

Diana was kind enough to answer some questions for Vancouver Is Awesome. 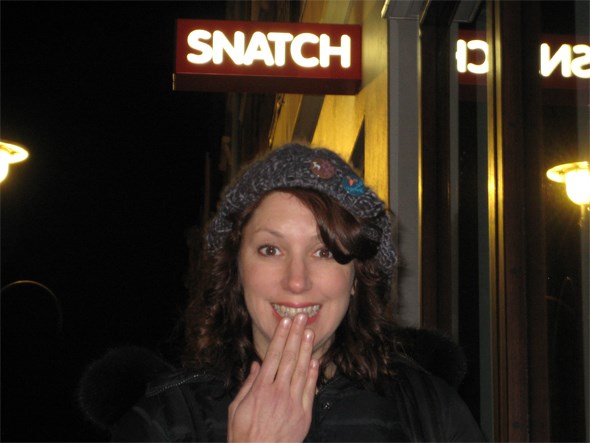 In September - after my first Thai massage - in Thailand. My buddy took a picture of me in the tan brown shirt and pants they put you in. I had been pummeled into relaxation and my head had been vigorously massaged. I looked like a very relaxed escaped lunatic. There has never been a less flattering photo of me ever taken and it cracks me up every time I look at how peacefully ugly I am.

That heckling in any way is helping the comedian. It's not. Cut it out. If you were helping, you'd be invited to join us for beers after. That ever happen to you Mr. Can't-keep-your-trap-shut? No, no it hasn't.

I get serious theatre envy whenever I go to Chicago. I'd love to see a venue in Vancouver that focused purely on comedy that had a large 2-300 seat theatre for big acts, a couple of smaller 50-100 seat theatres for newer works, a room with a green screen for shooting videos and a kick ass loungy bar for hanging out in. And I've seen that many times in Chicago.

You have worked as a writer on different television shows, what skills does that take that are different from your stage writing?

Writing for a comedic voice that's not your own can be challenging. You have to adapt to what the existing show has already created. And sometimes what cracks YOU up might not be the sense of humour for the show. You have to understand the rules of the show, work within it and be gentle when pushing the existing boundaries. At least at first. Once you've been on the show for a while your comedy will inevitably seep further into the cushions like a bad fart.

Between sketch and improv what is the difference between the experiences on stage?

From a performer's perspective, when you improvise you know right away if the audience is digging what you're doing. But with sketch, you can rehearse that 'Recipes of Anne Frank' sketch till the Nazi's find the bookshelf and even though you think it's hilarious, you won't know if the audience does until your on stage quietly breaking the eggs into a bowl. (By the way - The Recipes of Anne Frank was an actual sketch that my sketch group Canadian Content did a few years ago. We thought it was hilarious.)

My preference is improv because I love that immediate gratification. And if it isn't working you can switch it up right away, and not have slog through the silence to the part of the sketch where the Nazi's are killed by Anne Frankenstein. (Seriously, I still think this sketch is hilarious.)

You started a company called Rock Paper Scissors, what was the most important lesson you have learned about the business part of show business?

1: When going into business with friends, clear and concise contracts will protect both the business and the friendship. Unfortunately, I keep having to learn that lesson.

2: The business side of show biz can often be 80% of the work. As a comedian, you are your own business. I learned pretty quickly that if I wanted Rock Paper Scissors to make money doing improv comedy in the business world, then I better know how to present myself in the corporate world. Because they're NOT like us. I'm constantly surprised at how terrible some really good comedians can be at running their business. So often I see really talented guys/gals shoot themselves in the foot by essentially advertising themselves as difficult to work with, unreliable or a full on asshole.

3: Set up an account named TAXES in your bank account and every time you get paid ANYTHING (even 20 bucks) transfer 15% into that account. Make it so you can not access that account via your bank card. Trust me, at the end of the year when you have to pay taxes or GST/HST you will love this. Unfortunately I have to keep learning that lesson.

Comedy has been called a boys club, is there anything you can do in the world of comedy that a man cannot?

I think the only thing that I can get away with on stage (particularly in improv) that the boys can't is get super physically sexual with the guys. If I grab a guy's sack in a scene, it's delightfully hilarious. But a guy has to be WAAAY more careful about what he does to me sexually/physically in a scene. I have to be the one giving him permission or it gets too rapey and can freak audiences out. That said, I'm all about equal opportunity groping on stage. If you let me grab your bag, I'll let you grab my wee cans.

Vancouver is a tricky place for comedy. We have a great talent pool of comedians, but there is a dearth of affordable venues that are actually set up for live theatre. Most of the time we are forced to start comedy shows in bars and restaurants that have terrible sight lines, bad sound systems or unknowledgeable owners. This in turn can put off audience members from returning.

That said, I do think Vancouver is a great place for improv right now. The new Improv Centre that the Vancouver TheatreSports League has on Granville Island has really revitalized the community. And shows like Sunday Service, Guilt & Co and the Vancouver Improv Festival are doing really fun new stuff. Urban Improv is still going strong and I'm super proud that a whole swack of the kids who do our first half are now in the new TheatreSports Rookie League. I'd like to see more sketch shows - I can't think of anyone who is doing a weekly regular show in Vancouver.

For Improv: The Armondo Show at Improv Olympic, Chicago

For Sketch: Picnicface (Halifax group that will have a new series on Comedy Network coming soon. Fingers crossed)

Local Girl Improv(es) Her Life! (an actual title from an article written about me a few years ago)