“Comedy is tragedy plus time.” It’s been said many times by many comedians. I believe the original usage dates back to the great Carol Burnett.
0
Jul 29, 2010 3:09 PM By: Graham Clark

I think of that story when I see Kevin Lee perform. His manner and appearance never give any hint of anything out of the ordinary, but he is always there with just the right twist to make something surreal.

I first met Kevin when he was doing stand up comedy. The “was” in that sentence has left the people who were lucky to catch him doing it with heavy hearts since he no longer performs in that medium.

His act included many non-sequitors, from him discussing the best tattoos to have under a moustache to a bit where he pulled a DVD copy of Legends of the Fall out of his pants at the end of the show.

Kevin moved on to a sketch duo with Sean Devlin that would produce podcasts and live performances called “The Living Room”. These sketches reveled in the absurd and surreal, while Lee’s outward demeanor would suggest nothing odd is going on at all.

Kevin’s most recent comedy home has proven that his obtuse comedy isn’t necessarily the product of hours of forming and reforming an idea, but something he can do on the spot. When Kevin performs with the Sunday Service, the only thing I can rely on is that his reactions to things are never what I expect.

His improv skills reveal that leaving behind the solitary act of stand up might have been a good idea, because he shines as a collaborator.

Some day his cast mates will be able to recall the fact that it was Kevin who added the idea to some wonderful piece that made their creation such an unusual delight.

You can find out more about Kevin and the Sunday service at thesundayservice.ca

Kevin was kind enough to collaborate with me on this article in the form of answering some questions. 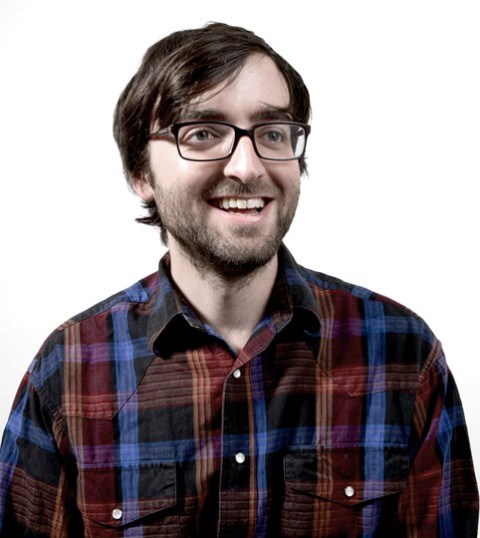 When I was 6, and my older sister's boyfriend at the time said "Knock knock" and I said "who's there?" and he threw sand in my eyes and said "I forget the rest of the joke." He laughed, I cried, and my sister broke up with him 3 jokes later.

Wait, I think I read the question wrong...

What would you say to people who say they hate improv because of what they’ve seen on television?

I'd say you probably hate cops, doctors, lawyers, cowpersons, serial killers, Friends, Seinfelds, and reality because all of those are on TV too, right?

Then you'd shake your head and say, well I like some cops, some doctors, all serial killers and I'd stop you right there and say improv is a difficult to show taped on TV because improv, arguably moreso than all other comedic form, is a dialogue between the audience and the performers.

Which isn't to say that the audience should be talking/yelling at us performers during the whole thing (because they really really shouldn't), but I mean rather a dialogue of energy, where energy flows back and forth freely, effecting one another as we go along and shapes every aspect of the show. Stand up, sketch -- these things are pre-prepared and staged and can certainly feed on energy in terms of volume and pace, but the content is set. With improv, at its best and purest, nothing is set.

And hell, TV is full of G-D sets! TV is shown on an eff'n set fer christing out loud!

I wish I'd read the question wrong...

What is your dream comedy venue?

We're all really small and we're under the cushions of Robin William's Hollywood couch. We're playing for dust mites, loose change and even looser food crumbs. My fourth grade teacher, Mme. Dube, is there, and she's still super foxy. I approach her after the show and ask her where she's been, and she says, "Ici."

Preferably one without huge pillars obstructing the view, one with good acoustics and lighting. Best and perhaps most underrated is one with owners and staff who appreciate and understand the show and its needs, and leave you alone to do your thing and grown and build. Fortunately, we have that now at the Hennessey. The only thing that's missing is a curtain and a green room/backstage area -- there's little that's more deflating for us and the audience to just say "Good night!" and turn the bright lights off and stand there on the naked stage. But hey, you said "dream" and not "wet dream" so...

What is something audiences do that completely ruins  improv shows?

It's really surprising how few people make the connection between, say, how you act were you to attend a play and how you act when attending a comedy show, improv or otherwise. Many people somehow think that because you're paying somewhere between nothing and hardly anything and that it's a comedy show that participation and interaction is invited. They think that comedy = you thinking you're as funny or funnier than the people who obsess over it and do it despite no financial gain or certain promise of glory.

When you go to a play, do you stand up halfway through and start reciting lines from another play?

Basic respect for comedy is just something that lacks in a lot of people. But what do we expect with shit like "scary movie" and whathaveyou teaching the majority of people what comedy is.

Ooh I definitely read that question right. So mad!

Because we're underestimated. People think of Montreal (Just Pour Rire) and Toronto (Second City) as the big dogs. And that's because they are. We're great because we're new, we're scrappy, we're hungry, and we're getting stronger. There are very few dominating clubs/cliques/establishments to kowtow to or defer to or compromise with. We're growing out in all directions and there's a lot of room for exciting experimentation. Everyone's more accepting and willing to try things and see things tried. Plus, because we're not the big dogs, we don't have that "gotta get noticed, gotta get a deal" mentality as the fleas on the big dogs do, so it's more for the fun, for the experiment.

If you liked that answer and want to sign me to your TV station/record label/mom's leg cast, please emailthesundayservice@gmail.com. Be sure to ask for Kevin Lee, and he'll point you in the right direction.

Hm. I'd have to go with The Cody Rivers Show. They are a sketch duo from Bellingham Washington who are absolutely without a doubt the most inventive, intelligent, accessible, unique, fun, hard-working, complimentary-adjective-inducing sketch duo I have ever seen. When I saw them many years ago to this day, they completely changed my thinking on what live sketch and performance and, yes, even comedy could be. We're lucky enough to be in Vancouver, where they perform often, but not often enough. (also, we're close enough to just go down and see them for christing out loud).

You have performed in sketch, stand up and improv. Which one could you absolutely not do without and why?

By "do without," do you mean me-performing-in? or if I was stranded on a desert island that had a dream venue on it, which would I bring and why?

As for the former, it's improv all the way: it's the only one of the three that I find myself drawn to and enjoying the most. Plus: I'm not good at the other two.

As for the latter, I'd bring the internet so I could twitter constantly about how "I still haven't found the hatch, brother." Yesss a Lost joke! That show's still on right? Twitter-freshness!

Laught Place - where I ask people who come in last place at marathons and races what's the funniest place they've ever finished in.

Pee Your Pants Off with Kevin Pee - where I talk to chronic pants wetters and what, if any, hope they have of finding a life parther who accepts them for who they are: fully grown adults who piss themselves.

Aquarius Humour - and it'd have a drawing of a man pouring water, but that man is wearing a comedy mask, and is pouring out a vase full of eyeballs that are wearing tragedy masks. It's all eye-jokes. And I'm an Aquarius.

You do some long form improv, is there ever a temptation to take a particularly good story line and adapt it to another form, like a sketch?

Oh yes. But taping and then watching that tape in order to dredge it for material is tedious. I mean, have you ever watched improv on TV? HORRIBLE!

Where would you like to be in comedy a decade from now?

On Robin Williams' couch at his estate sale. JUST JOSHIN!*

*another pun'd article title, where my decade-from-now son Josh gossip and talk trash about comedians and comedy! He hates me!