Where to celebrate Australia Day 2020 in Vancouver

This year, many of the events being held over the Aussie Day weekend will also be an opportunity to raise much-needed funds for bushfire relief in Australia...
Jan 17, 2020 4:55 PM By: Elisia Seeber 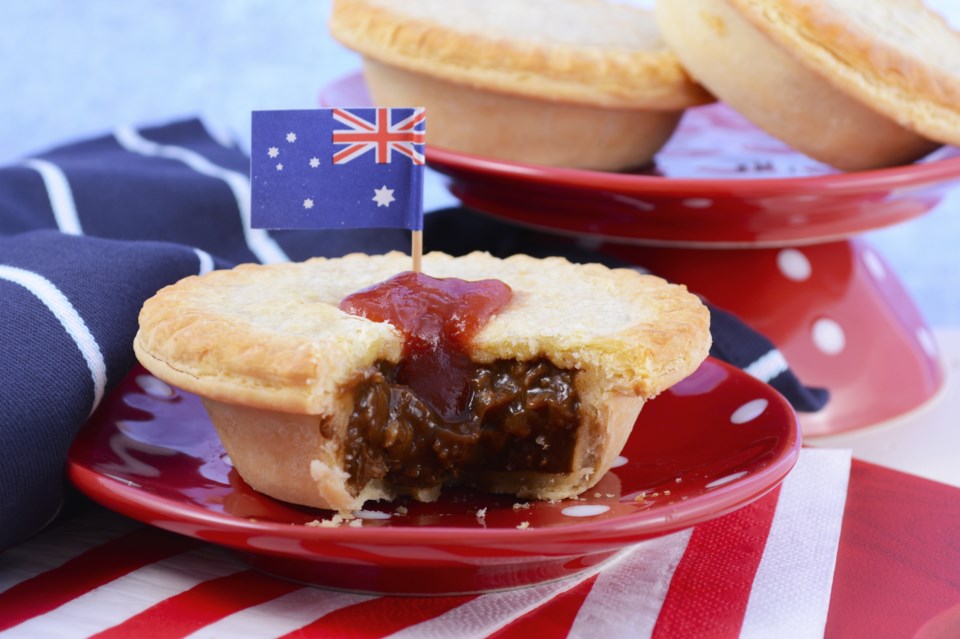 If you’re not heading to Whistralia (a.k.a Whistler) for ‘Straya Day with the rest of the crew, don’t stress, there are a few other shindigs [parties] happening around Vancouver where you can sink a couple of frothies [beers] and toast to the sunburnt country.

Aussies are a proud bunch and occasionally a little rowdy and, as one myself, I’d just like to apologize in advance on behalf of any larrikins and cheeky buggers who might cause a ruckus come Jan. 26.

The date marks the anniversary of when the first fleet of British ships landed on Australia's sandy shores at Port Jackson, New South Wales, and Governor Arthur Phillip stuck a flag in the soil at Sydney Cove in 1788 ... donkey's years ago.

For Aussies today, it's a day to reflect on what it means to be from Down Under, to celebrate contemporary Australia, and to acknowledge our history, culture and diversity.

In a nutshell, "it's a celebration of everything we love about Australia: the land, the sense of a fair go, the lifestyle, democracy, the freedoms we enjoy and our people," the National Australia Day Council writes.

This year, many of the events being held over the Aussie Day weekend will also be an opportunity to raise much-needed funds for bushfire relief in Australia, as the country continues to battle a catastrophic fire season.

If you’re not an Aussie, don’t be shy; come say g'day and have a bevvy [drink] in the arvo [afternoon] with us. Find out what it means to be a true-blue Australian.

This is probably one of the most popular watering holes for Aussies who flew the coop and wound up living in Vancouver.

As per tradition, the venue will be hosting two Australia Day parties, because one just isn’t enough. Both of the events are an opportunity to raise much-needed money to assist with the devastating bushfire crisis. In true Aussie style, Moose’s is donating $1 from every parmigiana a.k.a 'parmie', super parmie and meat pie sold to bushfire relief throughout January.

TIP: These events book up fast and we’ve heard they’re chockers – so make sure you call and reserve a spot for you and your crew.

The pub will be broadcasting the Triple J Hottest 100. For those who don't know it's an annual music poll hosted by the government-funded, national Australian radio station, Triple J. All are invited to wear green and gold, bring their flags and enjoy some good Aussie tucker and drink specials until they cark it. The night will also include raffles.

Where: Moose's Down Under, basement, 830 W. Pender Street

This event is so you can party at the same time as your mates back home. Once again, all are invited to wear green and gold, bring their flags and enjoy some good Aussie tucker and drink specials. The night will also include raffles. Plus, there will be live music in the evening followed by a DJ until late!

Where: Moose's Down Under, basement, 830 W. Pender Street

Support friends and loved ones in "the Land Down Under" by watching a screening of all four of George Miller's iconic dystopian classics—Mad Max, The Road Warrior, Beyond Thunderdome And Fury Road—back-to-back on the big screen at Rio Theatre.

Get ready for trivia, raffles and door prizes, a 50/50 draw, a costume contest and, most importantly, a chance to send some love, friendship, and dollars to those on the front lines of this environmental disaster. 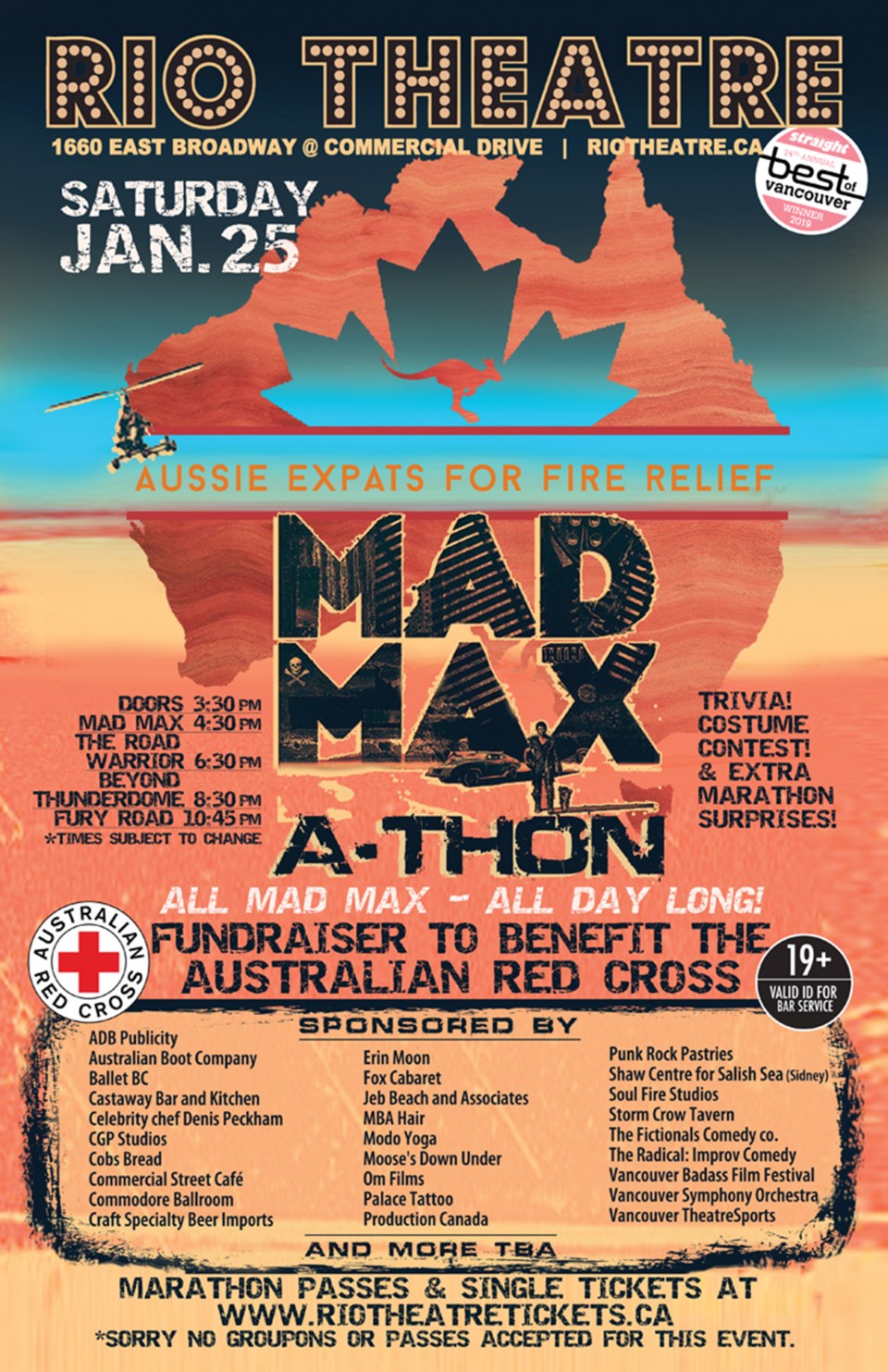 Firstly, if you didn’t already know, there’s a social club for Australians and New Zealanders nestled in the heart of Mount Pleasant.

It’ll be hosting its annual Aussie Day celebration from 5 p.m. on Friday, Jan 24. Folks are invited to “come Down Under to the best Aussie Day celebration in the city!” The party is held in the club’s downstairs lounge. There’s a pool table and dart boards, and the setting has often been likened to your favourite uncle's rec room.

But there’s more – the party will kick off with Triple J's Hottest 100 and they’ll be serving Bundaberg rum and cokes, Coopers beer, and meat pies from the Aussie Pie Guy.

This event is a chance to raise funds to support the Australian bushfire relief. Come together for a good cause, kick back and listen to Triple J’s Hottest 100, take part in door prizes, raffles, a silent auction and watch a comedy show!

How you can help: The club is still collecting donations for the fundraiser. If you have anything you’d like to contribute you can contact Morgan King: mking@westcoastsaints.com. Find more Info about the Club HERE. 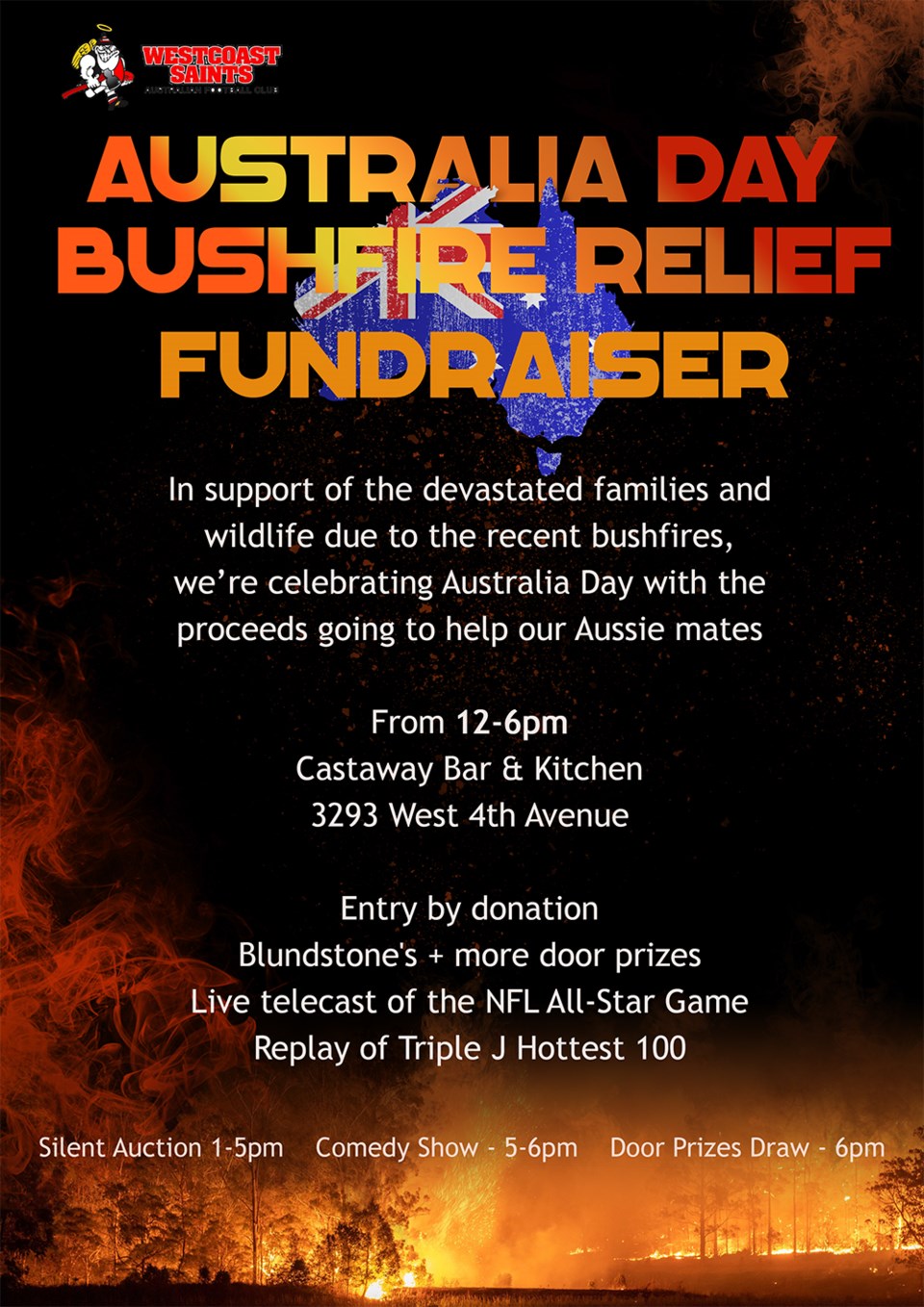 Head to The Beaver on January 24 for an Australia Day Party and a chance to raise money for bushfire relief. Donations will support the Australian Red Cross.

Look forward to listening to Triple J's Hot 100 countdown and drink specials including $4 Russell Beers and $6 Bundaberg Rum all night.

Aussie ex-pats in Vancouver organize events to support bushfire relief
Jan 8, 2020 8:46 PM
Comments
We welcome your feedback and encourage you to share your thoughts. We ask that you be respectful of others and their points of view, refrain from personal attacks and stay on topic. To learn about our commenting policies and how we moderate, please read our Community Guidelines.