Started in 2016 by Create Vancouver Society, the Vancouver Mural Festival aims to provide a platform for the city’s diverse art scene and to contribute to the cultural legacy.
Aug 7, 2018 2:57 PM By: Jessica Kerr

Vancouver artist Sara Khan is painting a little outside her usual box — her largest paintings to date measure about eight by six feet. This week, she’s working on a mural measuring about 60 feet wide for the annual Vancouver Mural Festival. 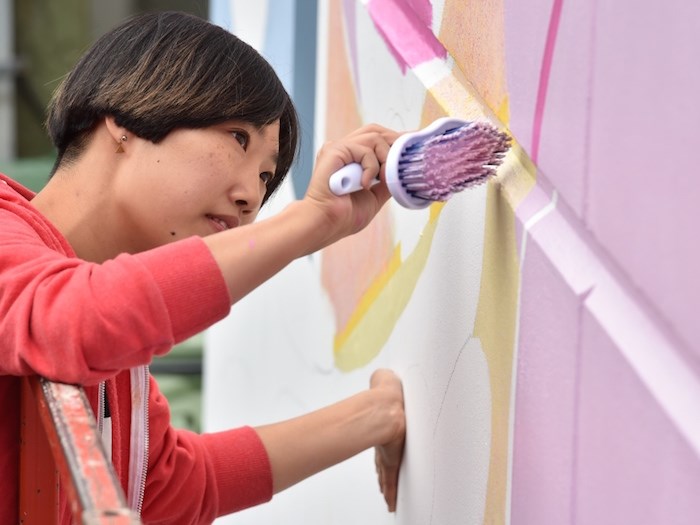 “This is very insane,” she says with a laugh, adding that for the last several years she’s been working on much smaller, detailed pieces and primarily uses watercolour these days.

Khan, who is originally from Pakistan and moved to Vancouver four years ago, is part of a group of artists hard at work on a new batch of murals that will be part of this summer’s Vancouver Mural Festival, running in Mount Pleasant Aug. 6 to 11.

Started in 2016 by Create Vancouver Society, the festival aims to provide a platform for the city’s diverse art scene and to contribute to the cultural legacy.

“Our mission really is to change the way art is seen in the city,” says Andrea Curtis, director of operations.

Khan and her fellow featured artists are not working alone. All told, 40 artists are working on close to 30 walls with the help of 60 volunteers. The festival has a total of about 100 volunteers, Curtis says, adding that organizers fielded about 700 applications from artists this year.

She says in putting together the festival, organizers chose an eclectic range of local and regional artists with backgrounds in fine art, tattooing, street art, graffiti and traditional and contemporary Indigenous design. Curtis said organizers also deliberately try to make sure the field of artists is balanced with at least 50 per cent of the artists being female or non-binary, persons of colour and Aboriginal.

Hanna Lee Joshi graduated from Emily Carr with an animation degree. After several years working as a story board revisionist and artist for TV cartoons, including My Little Pony, she has spent the last few years doing freelance illustrations and primarily works in digital.

“This is my first big mural so I’m a little nervous,” she says. 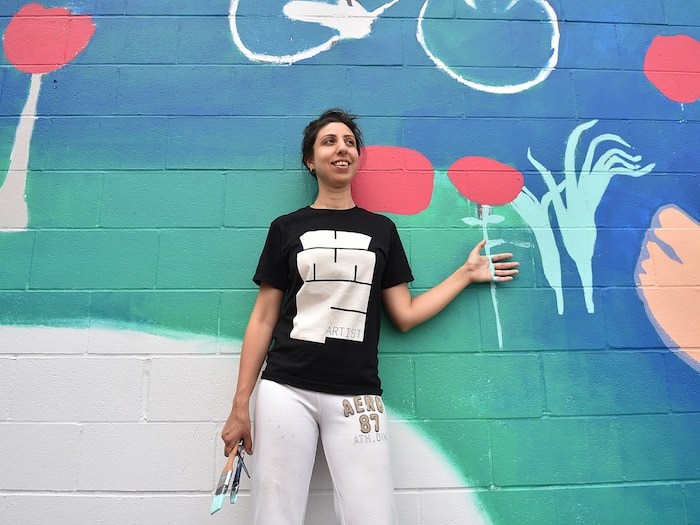 Painter Sara Khan stands in front of her mural in progress for this year’s Vancouver Mural Festival, which runs Aug. 6 to 11. Photo Dan Toulgoet

The local artists, which this year also includes Danielle Krysa, the artist behind The Jealous Curator website and podcast, and Musqueam designer and weaver Debra Sparrow, are joined by an all-female lineup of international guest muralists — Faith XLVII from South Africa, Bunnie Reiss from Los Angeles and BK Foxx from New York.

The festival is also partnering on murals with local organizations, such as the Downtown Eastside Centre for the Arts, THRIVE Art Studio, Burrad Arts Foundation and Mount Pleasant Neighbourhood House.

With daily events, including mural tours, all week starting Aug. 6 the festival culminates with Aug. 11 with the Mount Pleasant Street Party, which runs from noon until 6 p.m., along Main Street from 12th to Seventh avenues. The festivities will include markets, street dance battles, graffiti jams, multiple beer gardens and entertainment on various stages. Check out the official map here. 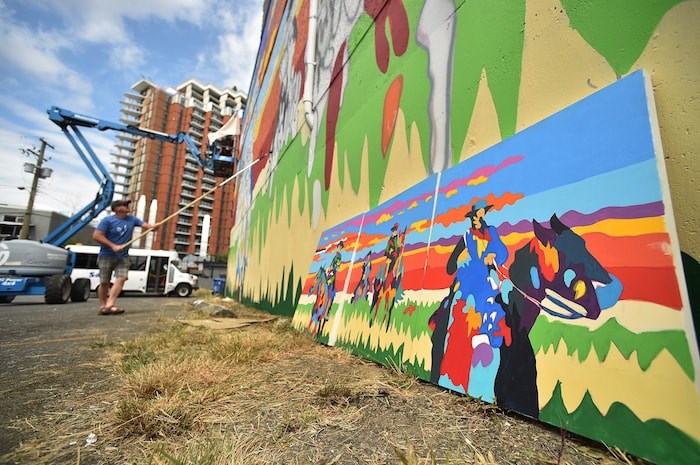 Doors open at 6 p.m. and info and tickets are available online.