Harold, the planetarium's 1968 Zeiss star projector (still from YouTube ). As of today, only 12 performance nights remain before laser light shows at Vancouver's planetarium are history.
0
Nov 18, 2011 1:43 PM By: Rhiannon Coppin 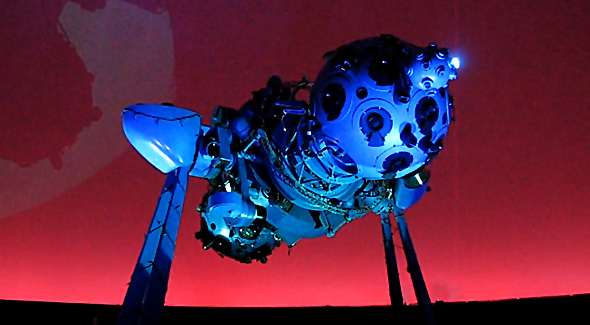 As of today, only 12 performance nights remain before laser light shows at Vancouver's planetarium are history.

The countdown was announced earlier this month, after the board of the non-profit H.R. MacMillan Space Centre told Roundhouse Productions, by literally quoting from Pink Floyd's Dark Side of the Moon, that “the time is gone; the song is over.”

Craig McCaw and John Tanner's psychedelia-inspired light and love show has been creating and enhancing out-of-body experiences for Vancouverites since 1978. (In 1991, reviewer John Armstrong wrote in the Vancouver Sun: "it's like skateboarding through the clouds of Magellan.") 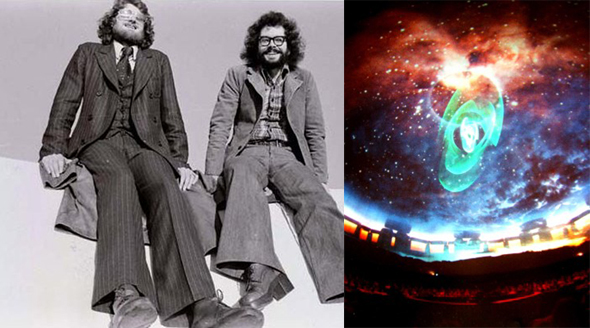 John Tanner (left) and Craig F. McCaw, in a photo from the 1970s, created enduring memories of synthetic nebulae clouds in the planetarium, with no additional synthetics needed to enjoy and appreciate the show. (From the Craig McCaw Collection/via Flickr, and web site of Roundhouse Productions)

Vancouver's long-time teenage-first-date staple began with John Tanner, a top DJ in Vancouver in the '60s and '70s. Tanner had a job at the planetarium in the late '70s and convinced management to let him and McCaw, an old buddy from Kelowna (and by then, ex-member of The Poppy Family), put on a rock-and-light show.

In a 2003 interview with the The Vancouver Courier's Michael Kissinger, McCaw said the show was controversial until it proved profitable.

"At first there was a whole bunch of opposition to us — filthy rock and roll and all that — so we did one show, then two shows. We did three shows and they looked at the money and said, 'OK, you can do the summer,'" he said.

So they did Supertramp.

In a 1999 interview that was printed in The Vancouver Sun, McCaw said: "We didn't even have a laser in those days. We would buy these huge old photo strobe bulbs by the case load and put them in a convex mirror then fire them off to the beat."

Orion McCaw at the controls (Roundhouse Photo) and laser projections on the dome of the Space Centre. (Roundhouse Productions' Facebook)

After Supertramp, there came more equipment (eventually some lasers) and a lot of musical experimentation.

McCaw said the shows that brought the best attendance tended to have the best, or at least most popular, soundtracks.

Roundhouse tried it all, "from Rachmaninoff to Radiohead, from from the Beatles to the Beastie Boys, and from The Poppy Family to Pink Floyd," as a recent press release put it. (There was even an Eminem show. Believe it.)

In 1994, around the time that Roundhouse launched the "Lollapalaser" show, McCaw estimated that his shows were bringing in half the revenue from about a third of available show times. (In 1999, he again told The Vancouver Sun that the gate revenue for the laser shows that year was half of what the Space Centre brought in.)

According to Roundhouse Productions, the laser light shows have continued to have strong attendance.

And that makes the sudden departure all the more shocking.

In a recent press release announcing the end of the laser shows, the Space Centre's executive director, Rob Appleton said the Space Centre needs to concentrate on its own core programming going forward, and that it can't justify the cost of replacing and maintaining the equipment needed for the laser light show.

"It's been a great run... and there are many people with fond memories of evenings spent here, but now as we prepare for our renewal project at the Space Centre, we have decided not to proceed with laser shows," Appleton said.

Some are quite understandably upset about the end of an era, but McCaw posted a plea on Roundhouse's web site and Facebook asking petitioners and protesters to "please... keep it mellow and take the high road."

The people behind Roundhouse Productions believe that their music shows have lured countless people out to a starry environment — people that might not have otherwise come out for just the sky alone. And though we may never know whether the rock 'n' roll planetarium shows inspired any one person to become an astronomer, it has had a lasting impact on the makeup of Vancouver.

As Roundhouse puts it: "You know it's been a long time when we often have people in the shows whose parents first date was at our laser shows."

If you want to check it out before the eclipse is complete, you can catch shows featuring the music of Led Zeppelin, Pink Floyd (choose The Wall or The Dark Side of the Moon), or Radiohead are running Friday and Saturday nights* (check the schedule to see which night and time uses which playlist).

The last four show nights of 2011 begin tonight. After eight more show nights in the new year, including a final grand finale, a fine Vancouver institution will complete its 33-and-a-third-year trip around the cosmos on January 28, 2012. 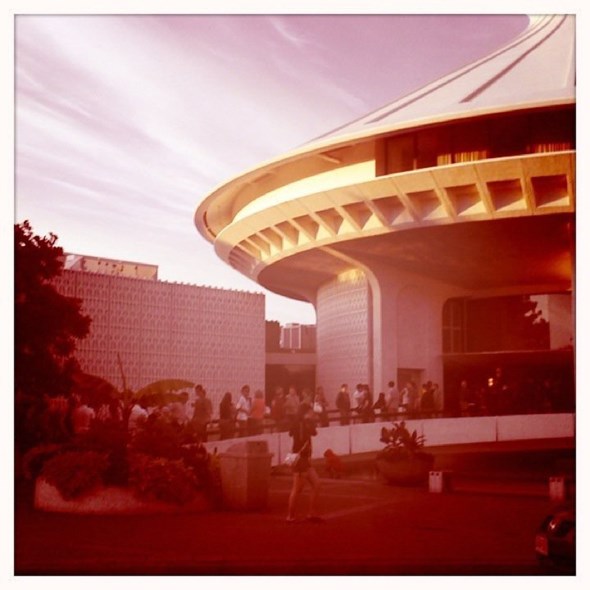 Passengers line up at the H.R. MacMillan Space Centre, waiting to be transported to a land of music and lasers. (Photo from Roundhouse Productions' Facebook)

*Note: On clear Friday and Saturday nights, the Gordon MacMillan Southam Observatory is often open, by donation, starting at 8:30 p.m. nights. Drop in and ask to see an exploded nebular, a globular cluster, a planet, or just some moons. It's a great way to spend the time between getting your tickets (before they sell out) and getting into line.

Vancouver’s Skookum Festival will not return this summer
Feb 24, 2020 4:10 PM
Comments
We welcome your feedback and encourage you to share your thoughts on this story. We ask that you be respectful of others and their points of view, refrain from personal attacks and stay on topic. To learn about our commenting policies and how we moderate, please read our Community Guidelines.