ReVIEWS, preVIEWS, interVIEWS, and overVIEWS: here's where you'll find out what the Vancouver Book Club team thinks about the literary scene in Vancouver. What you should read, where you should go, who you should sit up and notice.
0
Sep 9, 2012 12:10 PM By: Liisa Hannus

There's nothing like a tense and realistic bio-thriller to make you want to avoid air travel, stay locked up in your house and hope you have enough canned goods to see you through the upcoming epidemic. If you're lucky, you'll have a couple of Stephen Miller's books with you to help pass the time and fuel the paranoia.

In his fifth novel, The Messenger (Delacorte Press), Vancouver-author (and actor) Miller looks at the next incarnation of terror, bio-weapons, and its delivery system via young, idealistic men and woman. Plucked from a Middle Eastern refugee camp at a young age, Daria has been indoctrinated, groomed, and trained to deliver a crippling blow to the unsuspecting Western European and American capitalist population. Blend in. Take on their attitudes and mimic their frivolous lives. Play on the American obsession with superficiality and desire for fame, all the while sentencing them to death.

Part of a multi-pronged attack on the United States, Daria is both inoculated with a new strain of small pox and given virus-laced toiletries, and sent to New York City with a straightforward agenda: infect as many people as possible. "Go with God, she has been instructed. An arrow. Straight to the heart." 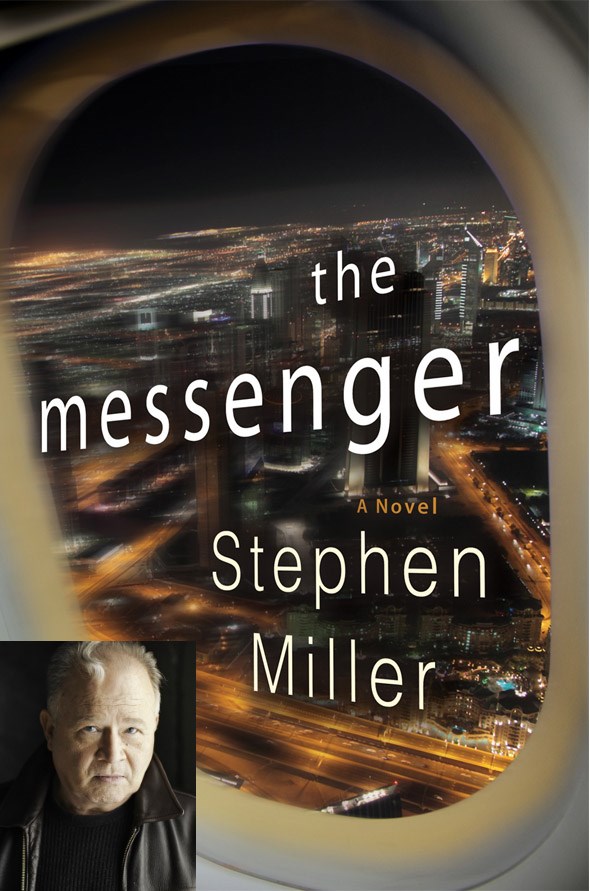 Posing as a reporter for Klic!, a fictional German teen magazine, writing fluff pieces about work and romance in NYC, she gains access to a number of high-profile places such as the New York Stock Exchange, "driving her arrow into the heart of the capitalist system that powers all of godless America." Rubbing on fresh and deadly hand lotion, she visits department stores, book stores, Rockerfeller Center, art galleries, transit stations and fire stations, all the while touching every surface she can, shaking hands, using the washrooms and touching faucets, door handles, the lever on the soap machine. She takes several cabs in a day, spritzing herself and the taxis with toxic perfume and paying with infected $20 bills. "It's easy, being an arrow," she thinks.

But as easy as it may be to deliver her payload, it is less so to keep fixed on her implanted ideology. While reveling in the thought that she is "taking God's revenge" with all that she is doing, she is simultaneously revising her views on capitalism, feeling that her time in New York is leading to more liberal thinking. She comes to believe that capitalism is not the work of specific groups (Jews, gangsters, robber barons) as she had been told, but of "vast corporations with no seeming purpose at all."  With her outsider's perspective, Daria sees what many Americans cannot from within.

Miller gives us another angle into the effects of bio-terrorism with the character of Dr. Sam Watterman, a disgraced and now retired bio-chemist who is press-ganged into helping the government get to the source of the new, growing threat. Watterman is bitter and suspicious, always wondering and questioning what his role is in this latest crisis. Taken from his dying wife's bedside to aid the various agencies involved, he is expected to work miracles with few resources and even less trust. Through Watterman Miller exposes much that is wrong with how governments respond to threats such as this: multi-agency bureaucracy, national secrecy, and corporate hands deep into governmental pockets.

As much as Watterman's storyline gives insight to the organizational chaos behind stopping and cleaning up after a bio attack, it is Daria's journey that really propels the narrative. Set loose with an expansive list of targets and little support, she is left on her own to coordinate and structure her attack. As her interaction with the American people becomes more up close and personal, she makes conscious decisions on who to infect, feeling remorse if she accidentally touches someone she feels should live. With no idea of how long it will take before she succumbs to the smallpox virus herself, she begins to despair when her demise seems to be too long in coming. "She wanted to be blown to bits, she wanted to have a fiery instantaneous death….Not like this."

Miller skillfully takes us into the mind of a suicide bomber, from beginning to end, and lets us see what could happen once the fervour of indoctrination has passed. Just as I'm much more interested in what Jason Bourne is up to than what the government is doing to catch him, I found Daria's story more compelling than Watterman's. There are only so many variations to be had when it comes to the machinations of government, whereas in Daria's case Stephen Miller takes us on a suspenseful journey, both literally and emotionally. It's almost enough to make us forget the likelihood of such an attack taking place. Almost.