Few back in 1919 could have anticipated that the Vancouver Symphony would last 100 years, and that a century later it would be the oldest registered symphony society in Canada.
0
Feb 1, 2019 1:08 PM By: Glen Korstrom

It was January 26, 1919, and the Opera House on Granville Street was packed – not only in the gallery, where patrons paid $0.35 a pop, but also in the boxes and balcony, where they paid $1 each. 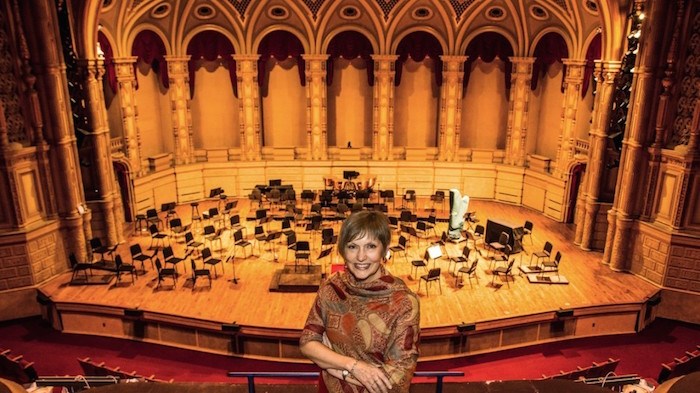 Vancouver Symphony Society president Kelly Tweeddale brought the concept of having a Day of Music from similar extravaganzas that she was a part of when she was with orchestras in Cleveland and in Seattle. Photo by Chung Chow

Few back then could have anticipated that the society would last 100 years, and that a century later it would be the oldest registered symphony society in Canada.

The Grammy-winning VSO’s staying power owes itself to countless proponents through the years, and the triumph of turning 100 years old is now being celebrated.

The first special event of its 2018-19 centennial season was a free July 14 concert at Sunset Beach, which drew an estimated 14,000 people and had costs covered by the Vancouver Park Board.

Kelly Tweeddale, president of the Vancouver Symphony Society, said she believes this was a good opportunity for the symphony to get out of its familiar Orpheum confines and be more accessible to people who might not normally buy symphony tickets.

Perhaps an even bigger way of connecting with the general public was what organizers dubbed the Day of Music, held on the VSO’s birthday, January 26.

More than 100 musical acts from across Vancouver performed in three contiguous venues – the Orpheum, the VSO’s Annex and the VSO School of Music – between Smithe and Robson streets on Seymour Street.

Those two free public extravaganzas are expected to bump season attendance this year up to 270,000 people, from 250,000 last year.

The budget has also risen, by about $1 million, to $18 million this year, compared with last year.

Extra spending is also financing commissioned musical works, and the 113-page book VSO 100: A Century of Memorable Moments, which traces the symphony’s evolution. Tweeddale plans to provide that book for free to large donors and to sell it at performances.

The book chronicles some of the VSO’s early champions, such as Mary Isabella Rogers, the widow of B.T. Rogers, who founded what is now known as Rogers Sugar and who died in 1918.

“She was relentless,” Tweeddale told Business in Vancouver. “The orchestra came and went but was always incorporated. Music was always at the centre. They never let the society die.”

The VSO’s moves to mark its special year may provide inspiration to the Vancouver Opera, which is in the early stages of determining how it will mark its 60th anniversary in the 2020-21 season, general director Kim Gaynor told BIV.

One thing for sure is that the Vancouver Opera will have a fundraising drive, she said.

She then quoted Rudolph Bing, former general manager of the Metropolitan Opera in New York City, as having said, “The opera always loses money. That’s as it should be. Opera has no business making money.”

About one-third of the Vancouver Opera’s revenue comes from ticket sales, with the rest coming from either public sources or fundraising, she said.

Over at Bard on the Beach, a small amount of the 30-year-old Shakespeare theatre company’s $7 million budget comes from government, with about two-thirds financed from box office and retail sales.

Executives, meanwhile, are readying for what they hope will be the festival’s best-attended season, with 48 actors in the troupe – the most ever.

Do not expect any glitzy galas to mark 30 years as a company, though.

“In terms of, ‘Are we putting on a party? Or standing on the street corner?’ No, we’re not,” said artistic director Christopher Gaze.

“You can waste a lot of time and money, frankly, doing things like that.”

For Gaze, the best thing his organization can do to mark its special anniversary is put on great shows.

“We’ve built a festival that is sustaining itself,” he said.