A police dog intercepted what is suspected to be 23 kilograms (50 pounds) of cannabis being transported in outbound luggage from YVR Airport to Toronto.
Jun 25, 2018 3:01 PM By: Graeme Wood

A police dog named Hooper was Johnny on the spot at Vancouver International Airport last Friday when it intercepted what is suspected to be 23 kilograms (50 pounds) of cannabis being transported in outbound luggage, according to Richmond RCMP.

The suspect, a male in his early 40s, from Windsor, Ontario was arrested after undercover police officers noticed his “unusual behaviour” prior to boarding an outbound flight to Toronto. 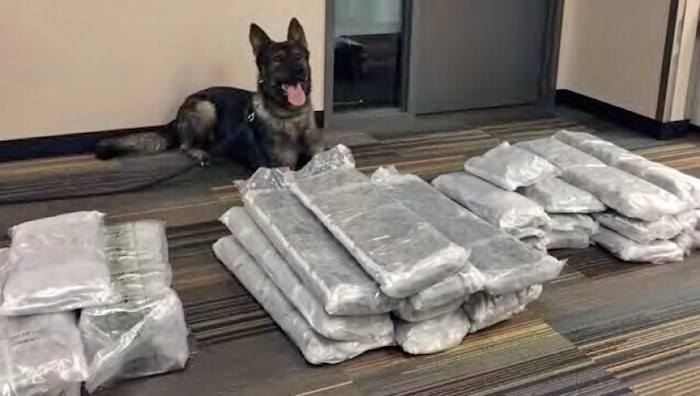 Hooper from the Lower Mainland Integrated Police Dog Services sniffed out suspected drugs at YVR on June 22, 2018, according to Richmond RCMP.

“Along with our uniformed patrol officers visible throughout YVR, there are many plainclothes RCMP officers deployed to maintain the safety and security of all the travellers and workers in and around the Vancouver International Airport,” says Corporal Dennis Hwang.

While Canada is set to legalize personal possession and use of cannabis on Oct. 17, possession will be limited to 30 grams of dried cannabis (150 grams of fresh cannabis).

Presently, possession of several kilograms of marijuana could result in up to five years in prison, according to the Canadian Bar Association (CBA).

Until Oct. 17, possession of cannabis remains a criminal offence.