This new series had its genesis when I began photographing Vancouver area location shoots last summer to get over a long post-Olympics funk.
Susan Gittins Feb 3, 2011 10:23 AM

Another spy series began filming in Vancouver in December just as almost every other production took its annual holiday hiatus. First sighted in and around the Vancouver Rowing Club -- with a big American flag flying on it -- at mid-month, Chaos is a comic look at a group of rogue CIA spies in the so-called Clandestine Administration and Oversight Services. Producers took advantage of a less congested downtown later that month to film in Gastown two days before Christmas Eve and in the Vancouver Club (with a Russian beater parked outside) the day before New Year’s Eve. 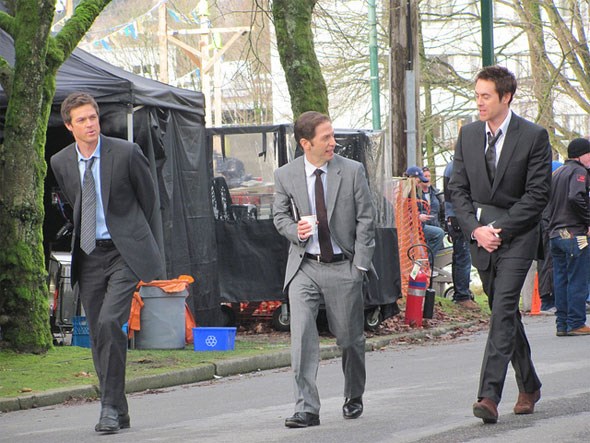 This CBS TV series, set to premiere on April 1st, stars Freddy Rodriguez (Six Feet Under and Ugly Betty), as unwitting department mole Rick Martinez; Eric Close (Without a Trace) as paranoid tactician Michael Dorset; Tim Blake Nelson (who really sang on O Brother, Where Art Thou?) as “human weapon” Casey Malick; and James Murray (Primeval) as ex-British Secret Services agent Billy Collins. I photographed three of the spy foursome walking through Shaughnessy at a location shoot last week in and around Hycroft, the University Women’s Club of Vancouver dressed as the U.S. Embassy in Paris.

I even got confused for a moment by a brilliant piece of set dressing at the gate, a fake brass plate which read: United States Department of State/Secretary of State Hillary Clinton/Barack Obama/President of the United States of America/Dedicated by/James Biddle Eustis/U.S. Ambassador to France/May 1893. 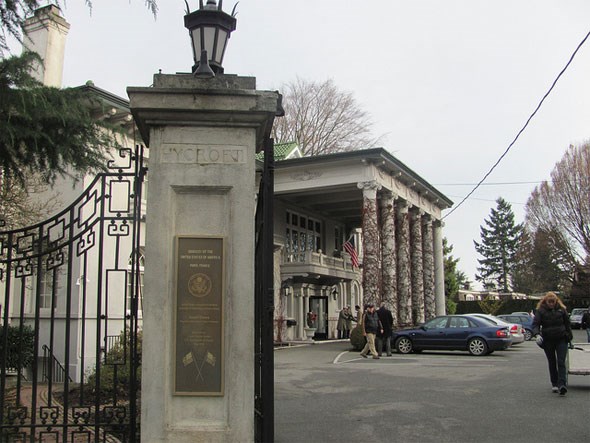 Early this year, Chaos had the singular honour of being mistaken for big-budget movie spy series Mission Impossible 4 (MI-4) at a downtown shoot. Someone snapped a photo from his office tower vantage of the Chaos spies filming on the roof of The Bay and the tweet’s MI-4 caption pushed it viral by Vancouver standards.

A little more than a week later, Chaos turned a section of the old Terminal City Iron Works into a Bolivian street market for two days and nights, filming some of the exterior scenes during the city’s first snowfall of the year. Luckily wardrobe for the spies at that shoot consisted of uniform black down jackets with hoods and name tags and the snow at sea level never amounted to much more than sleety rain. And while the rain did prove relentless, the main cast couldn’t have been more hospitable to their fans, signing autographs and posing for photos under their umbrellas outside their trailers. 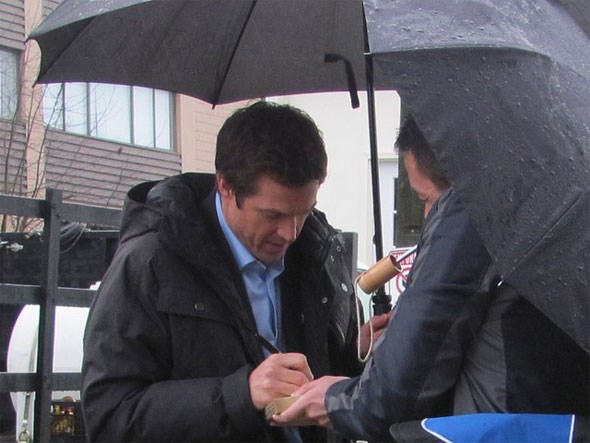 Since Chaos has been one of the few productions shooting outside in the generally miserable weather of a Vancouver December and January, it’s no wonder that they scheduled an interior shoot at a Belmont house (which doubled as a hotel and a restaurant) above Spanish Banks this week. No one could have expected it would turn out to be one of the most glorious sunny days imaginable. Here’s hoping there will be more of those for Chaos and us before the production wraps shooting here in late April.