#YVRShoots - OMC What a Supernatural Finale

This series had its genesis when I began photographing Vancouver area location shoots last summer to get over a long post-Olympics funk.
Susan Gittins May 26, 2011 3:58 PM

I expect to see many OMC (Oh My Cas instead of Oh My God) tweets from Supernatural fans over the summer hiatus now that gravelly-voiced angel Castiel has promoted himself to God: "I'm your new God. A better one. So you will bow down and profess your love unto me your Lord or I shall destroy you." The sixth season finale of the Vancouver-filmed horror series (which aired last Friday night in the U.S. and last night in Canada) ended with a slow pan in on the new God's fanatical eyes.

A friend found a filming notice in late March for some season-finale scenes set to shoot downtown in a T-shaped alley between Seymour and Richards and around the Victorian Hotel on Homer. I put up the notice on #YVRshoots, which brought Supernatural fans out in droves to see  their beloved Winchester brothers (Jensen Ackles and Jared Padalecki), the brothers' father figure Bobby (Jim Beaver) and the brothers' former angel ally Castiel (Misha Collins) in action. 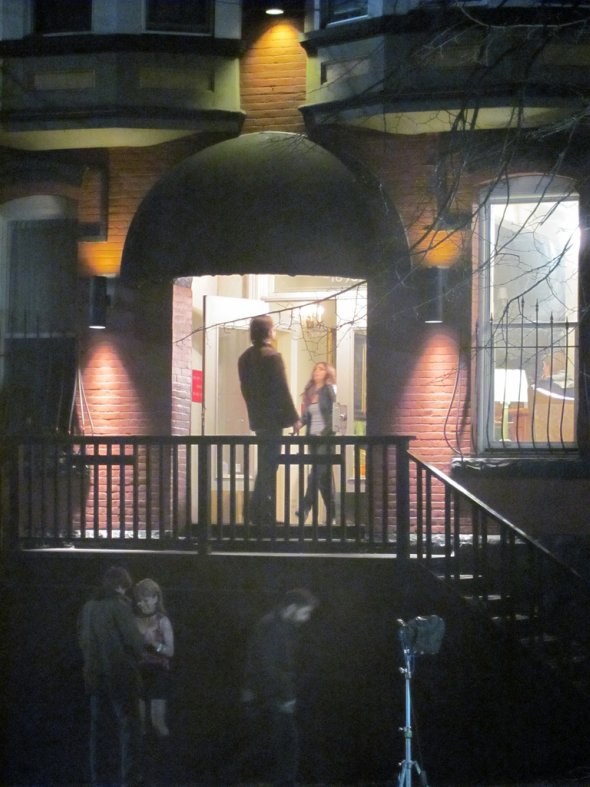 Thirteen hours of filming that day ended up as a handful of scenesdispensed with in the first 12 mintues of the last hour of the finale, which opened with Sam running down a street at night , the walls in his head tumbling down and his memory gone. He meets an unknown woman (Erica Cerra from Vancouver-shot series Eureka) in a bar and later they walk along Homer into the Victorian Hotel dressed as the Night Owl Hotel with a giant neon owl sign added. Supernatural filmed this scene at 1:45 a.m.in the morning, with only the most die-hard of fans sitting across the street on the pavement watching. Orginally the scene was scheduled to start at 11 p.m. and a yellow City Wide Taxi cab to drop them off but delays forced them to cut the scene short. At 2 a.m. precisely, all the lights went off and I heard Jared Padalecki say "Thanks guys" to the crew. After another day of filming Supernatural wrapped production for Season 6.

Earlier that night, Supernatural filmed in the alley by the Victorian Hotel parking lot from about 7 p.m. to 1:30 am, for a two-minute scene in the finale of Sam and the unknown woman talking by the brothers' infamous black Impala until a Sam doppleganger tries to shoot them, shattering the car windows as if hit by gunfire. Not much of this was visible to the fans waiting on Homer. 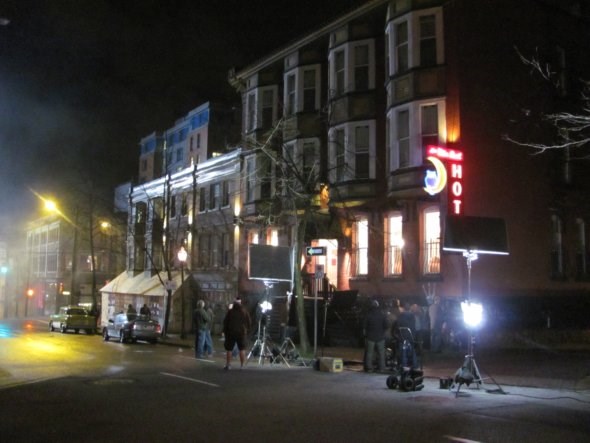 Filming started that day shortly after 1 p.m. as Dean, Sam and Bobby walked into the sun-lit alley from Richards St to find the bleeding body of Elle who'd been tortured by Castiel for her blood, which had the power to crack open purgatory and gain him access to its millions of souls. Fans and spectators stood at either end of the alley hoping the actors would walk over to talk to them. Jim Beaver, who'd been receiving pleading tweets all afternoon, did stop by to say Hi and tell the fans they were nuts for being there. 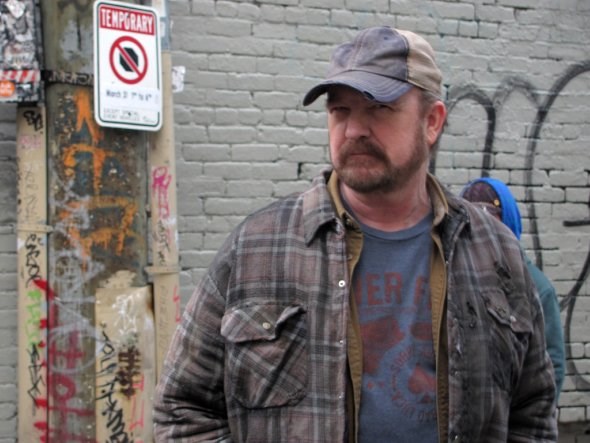 I stopped by late in the afternoon to see if I could photograph Misha Collins as Castiel in his signature beige raincoat on set. I was thrilled to capture him seemingly tweeting as he walked back to the "star car", a silver SUV parked in the lane. Unfortunately the photo didn't turn out and I had to settle for one of him behind the SUV door instead. 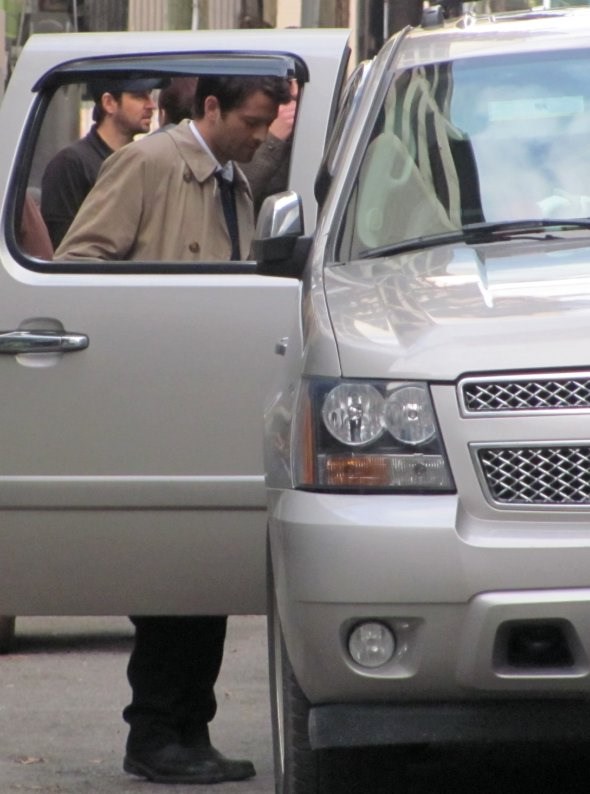 Misha Collins is an endlessly inventive tweeter. He actually played a tweeting, Namaste-t-shirt-wearing normal-voiced version of his real self in Supernatural's hilarious meta-episode The French Mistake, where Sam and Dean are thrust into an alternate world in which they are stars Jared and Jensen of a TV show called  Supernatural, along with an annoying co-star Misha. The episode had many funny nods to the city where the series is actually filmed: Dean – "I hear one more conversation about hockey, I’m going to puke." Ahead of time, Collins had one request for the producers: "Can we please make the Misha character a total douche-bag?" Mission accomplished in a very funny way.

During the French Mistake, the fictional actor Misha Collins tweets during the ET airing of the episode in early February about wanting to be friends with stars Jared and Jenson --  Hola Mishamigos! J2 got me good. Really starting to feel like one of the guys -- and the tweet appeared from Collins's real account @mishacollins. During the PT airing this tweet -- IMHO j&j had a late one last night ROTFLMFAO -- appeared.  These tweets went viral with RTs and the hashtags #Misha and #metamadness made it into the Top Ten Trending Topics in the U.S. that night.

It's no wonder then that Misha Collins is an absolute fan favourite since his entrance in the fourth season and why many fans'  hearts broke during the last several episodes of the sixth season as angel Castiel became an enemy to his friends, the Winchester brothers, because of his increasingly misguided quest to win the war in heaven, eventually choosing to take  the power from millions of souls from purgatory to transform himself into a soul-powered God. And a mean one, at that.

So while it was gratifying to see Misha Collins get third billing in the season finale, news that  he will not be returning as  a series regular in the seventh season is deeply upsetting to many, many fans. Supernatural resumes filming in Vancouver this July and I plan to make it a priority to find Misha Collins on location for the season opener as the new God in case he is written out of the series.