This series had its genesis when I began photographing Vancouver area location shoots in the summer of 2010 to get over a post-Olympics funk.
Susan Gittins Oct 28, 2011 9:52 AM

Break-dancing kid, rapper Mom, a trio singing The Climb while building a girl pyramid, large group performing the Macarena and YMCA. That's the audience at the Live Show of homegrown teen sitcom Mr. Young. So much talent in the audience and on set makes the Friday night taping of this multi-camera sitcom a fun destination for parents and kids. Plus every so often a well-known actor sits watching the show instead of being on it:  V's Christopher Shyer and family won a round of audience Monster Family Feud last Friday.

Made-in-Vancouver Mr. Young is a situation comedy about child prodigy Adam Young (Brendan Meyer) returning to his high school at the age of 14 to teach science to his best friend Derby (Gig Morton), his crush Echo (Matreya Fedor) and the dim-witted school bully Slab (Kurt Ostlund). Filming its second season in a massive studio behind the old Watchmen set in Burnaby, Mr. Young is a Canadian hit about to make it big in the U.S. Last month children's entertainment giant Disney started airing YTV's #1 show on its Disney XD channel and this past weekend premiered three episodes on the main Disney Channel as well as multiple airings on Disney XD. Seven episodes aired on Saturday alone.

Is Mr. Young on its way to becoming The Suite Life North? It has the pedigree: Mr. Young was created by Dan Signer, the writer/producer of Disney's hit series The Suite Life on Deck. And it's certainly laugh-out-loud funny to kids and some of their parents, although some of the adult-oriented jokes might have to be toned down for prospective Disney audiences. Each episode name is a variation on the premiere Mr. Young, from Mr. Roboto to last week's Mr. Tickleshmooz  -- about Adam's attempt to clone his crush's hamster after it dies in his care. I laughed watching Brendan Meyer give the stiffened original hamster CPR and again when the cloned hamster grew to monstrous size filling the school hallway. Monster hamster turned out to be the fifteenth episode of the second season, which started taping in July and wraps in January of next year --- six months for 26 half-hour episodes, including brief hiatuses for the young cast.

Last Friday's Live Show for Mr. Cyclops began with the audience load-in at 4:15 p.m. of about 200 into a basketball-court-length grandstand,  followed by a playback of Mr. Tickleschmootz, which I'd already seen on TV at home. Shooting of live scenes began about 5 p.m. and ended five hours later at 10 p.m. with a curtain call for the cast. That's a long time but the audience's energy never flagged thanks to wrangler/performer Dave Dimapalis, who kept the kids hopping between set-ups with games, contests, singing, dancing, you name-it. This man is great at his job.

Of the eight live scenes we watched, my favourite had to be Adam and Derby dressed as Men in Black with CIA (Cyclops Intelligence Agency) badges in their back pockets and black one-eye bands on their heads. 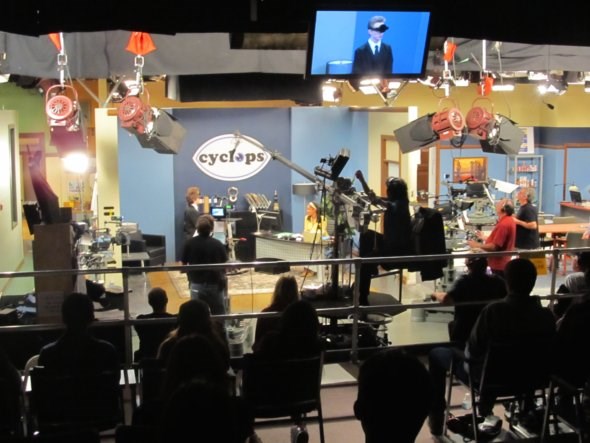 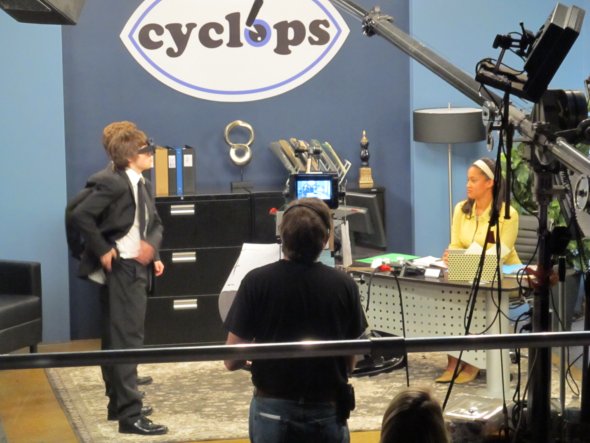 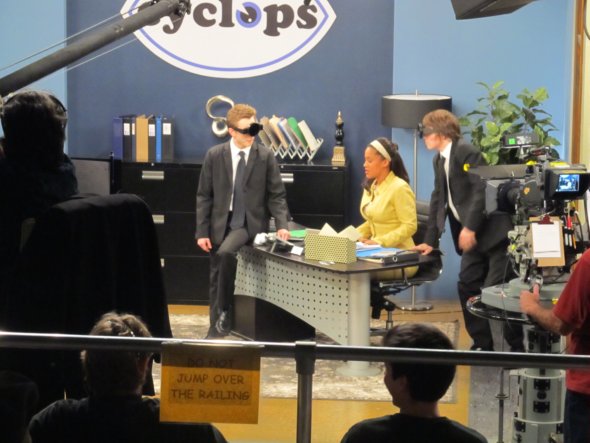 Note the yellow card in the photo above asking the audience not to "jump over the railing" at the teen stars.

Mr. Cyclops himself sat in the same section as me, since his scenes had been pre-taped. Turns out two-eyed-in-real-life actor Dave Collette went to high school with Fringe's Joshua Jackson. Vancouver can be a small world.

The live shoot began with a cold open of Adam and Derby having breakfast on the kitchen set. 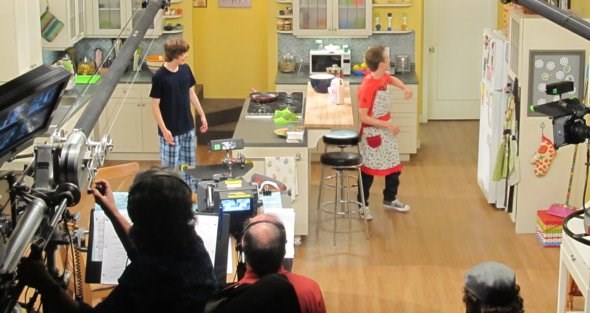 Gig Morton is well-cast as the prank-loving Derby. In the scene above, he announces he's going to have a bubble bath, strips off his shirt as he walks toward the fake stairs and then throws his pants down the stairs when he's out of sight. Episode director Jon Rosenbaum had them do several takes of the same scene.

Next we watched one of the eleven pre-taped scenes as crew moved cameras and other equipment over to the Science Lab set, where Mr. Young would grade papers while Derby smashed his cell phone and tried to grab his friend's  lap top for reasons I won't spoil. 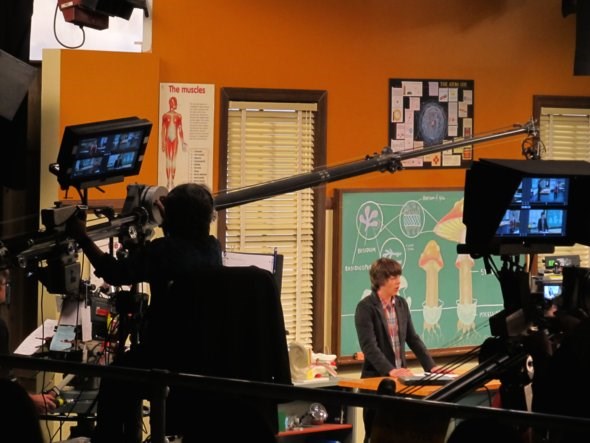 Before the next live scene on the Quad set, Dave Dimapalis got the audience to dance to YMCA -- can you see the Cs? 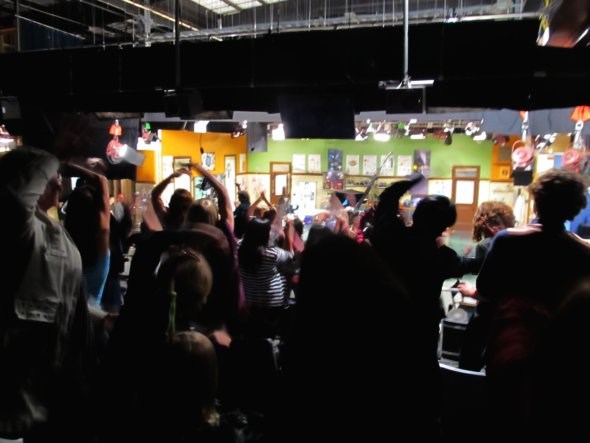 Not long after YMCA, three teen girls in the front row of the audience volunteered to sing Miley Cyrus's The Climb (very well) while forming a pyramid. The Quad live scene in front of them featured bully Slab not acting like a bully after joining a knitting group. Here Slab is wearing half-knitted pants and Principal Tater is wearing a knitted toupe while eating knitted cupcakes (made by a staffer with a hidden talent for knitting).  Bald Tater is played by Milo Shandel, the most accomplished actor in the cast with a long theatrical resume, including six years as The Awesome Aussie in the North American tour of Mamma Mia. 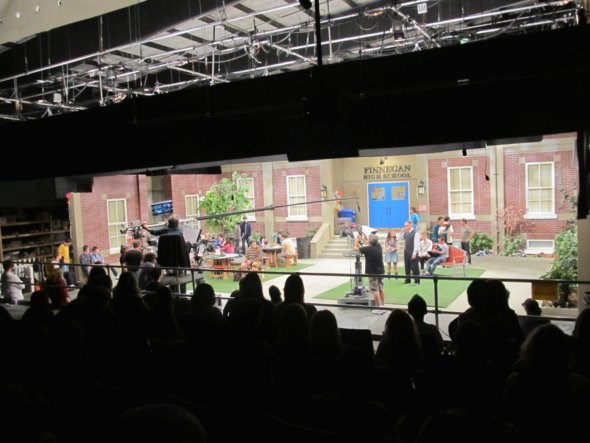 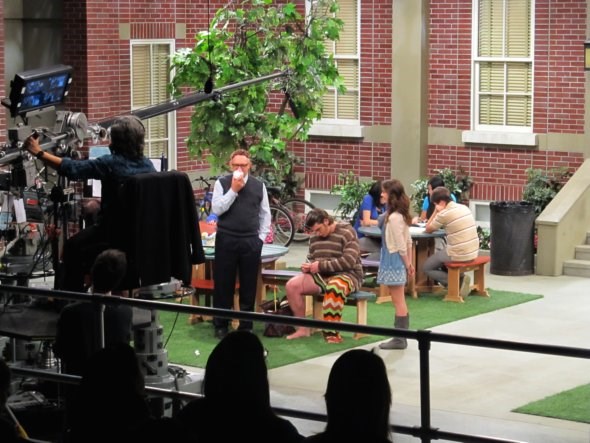 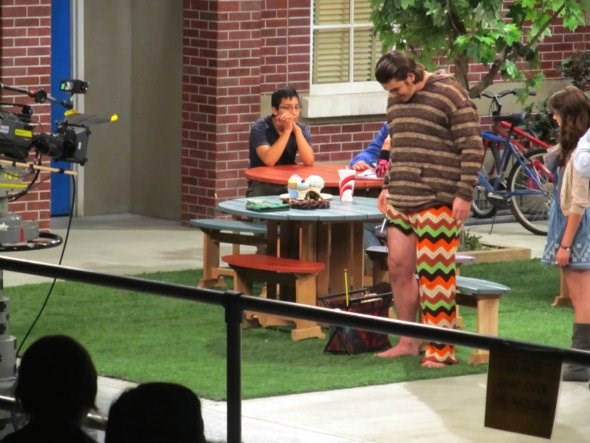 Next for me was an escorted group trip to the trailer washrooms outside the studio, which while massive is packed tight with everything needed for the production, leaving no room for guest washrooms. Audience pages are on hand to escort us at any time. They also delivered pizza to us in our seats about halfway through the live shoot. 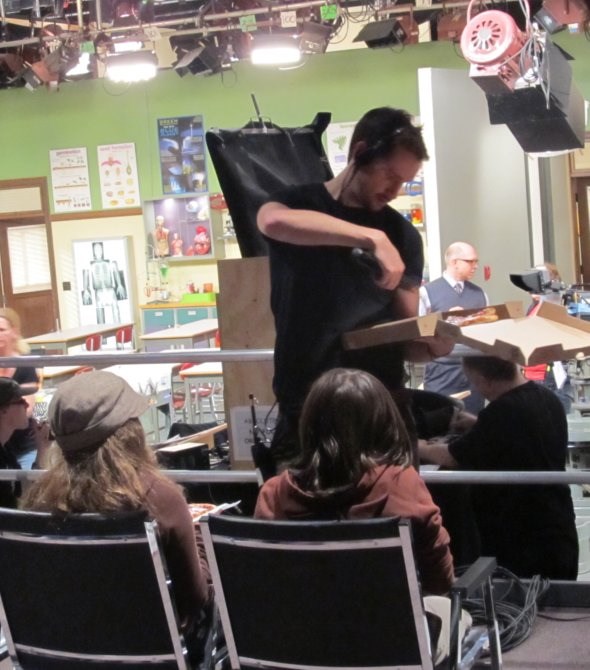 Next the action returned to the kitchen set, this time with Derby dressed in drag as a mother making breakfast for a skateboarding Adam. In between takes, the audience danced the Macarena, unaware that trained tap dancer Gig Morton danced along with them, costumed in his pink sweater and flowered apron on set. 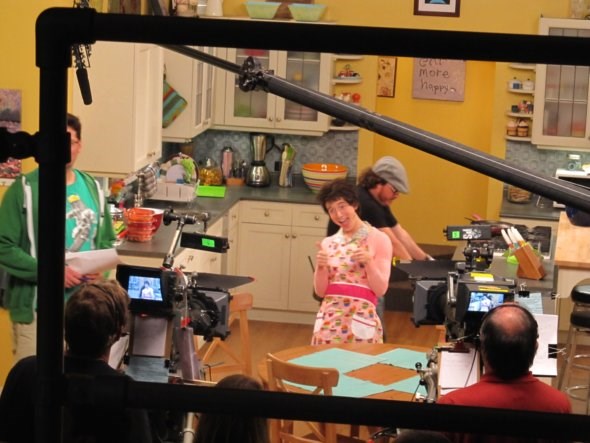 Around 8:30 p.m., the action moved to the Quad set at the other end of the studio, where bully and new knitter Slab had been busy. 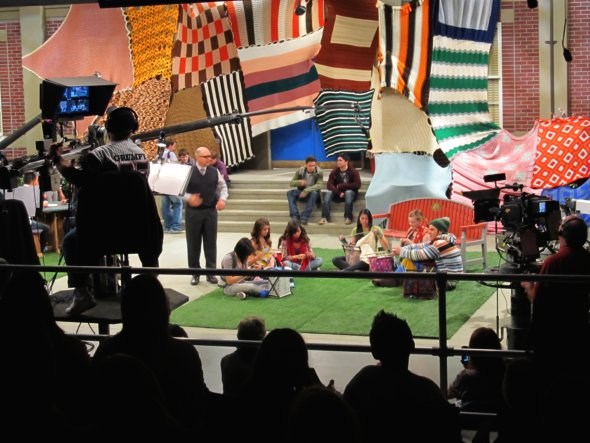 The only permanent set not really visible to the audience is the large school hallway lined with student lockers located behind the Quad, Science Room and other sets. The hallway is so big it's accomodated everything from a real bear and real horses to a giant CGIed hamster.

The final scene took place back on the Quad set with mostly everyone dressed in Renaissance fair costumes except Adam as some kind of squid, Slab as a bull and Derby as a centaur with a horse's body. Kudos to Mr. Young's costume department which only has a week from script to taping to whip up all these elaborate costumes each episode.

You can see some of the final scene costumes in the cast curtain call above. Afterward the audience lined up for their chance to meet the cast behind the stage and get autographs. I was introduced to all of them and discovered one follows me on Twitter. Another instance of how small Vancouver can be. 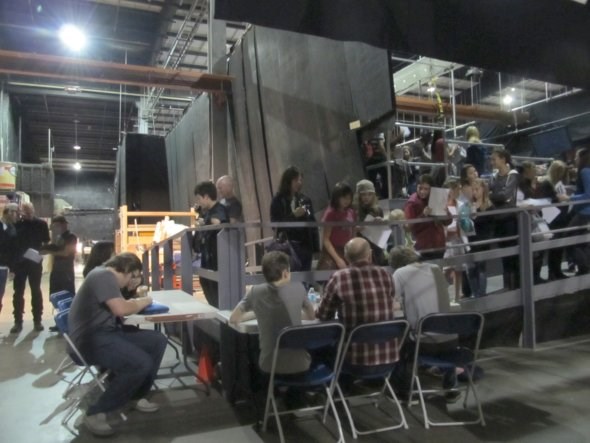 I do recommend attending a Live Show of Mr. Young.  A multi-camera sitcom is an event you normally would  have to go to L.A. to experience. And while the length of a taping may seem daunting, the kids will be entertained throughout even when your stamina is tested. One smart guardian brought a book to read while his delighted young companion jumped and down in her seat throughout the show.