Owners say with their opening, they hope to raise ramen standards and set the bar even higher for Vancouver's ramen scene
Dec 23, 2019 12:37 PM By: Lindsay William-Ross

A Japanese ramen shop known for their "chicken broth" style of the popular noodle soup will have their first Canadian location here in Metro Vancouver, as Afuri Ramen + Dumpling preps to open in Richmond. 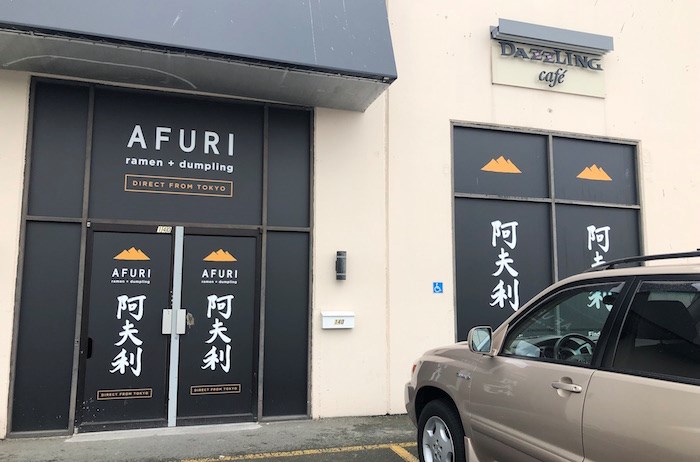 Afuri Ramen + Dumpling is moving in where Dazzling Cafe previously was. Photo by Lindsay William-Ross/Vancouver Is Awesome

The ramen shop has moved into the space vacated by Dazzling Cafe at 140 – 7971 Alderbridge Way. The Taiwanese "brick toast" restaurant had been incredibly popular at the outset, but failed to sustain in the space, closing for a lengthy renovation in late 2018 before ultimately packing it in for good this spring.

Afuri Ramen + Dumpling is named for Mt. Afuri, "on the east edge of the Tanzawa mountains in Kanagawa prefecture," according to the business.

The ramen shop has some pretty ambitious goals for what their ramen means to the world and their customers:

"We like to think we’re bringing sacred Mt. Afuri to the rest of the world. The mountain provides us with a kind of philosophy. It can be a little tricky to translate it literally from Japanese, but let’s just call it 'Higher.' We push higher in everything we do—everything, from pickling to serving—and we intend to reach for excellence as long as we are AFURI. Mt. Afuri remains—straight, honest, steadfast, dependable. That’s our aim. One ramen. One staff. Always higher."

Afuri came stateside in 2016, opening in Portland, Oregon. In addition to the Richmond location here in Canada, the chain is adding a location in Cupertino, California.

As Metro Vancouver ramenheads know, each ramen joint stands out for some aspect of their menu. In the case of Afuri, it's their "chicken broth." 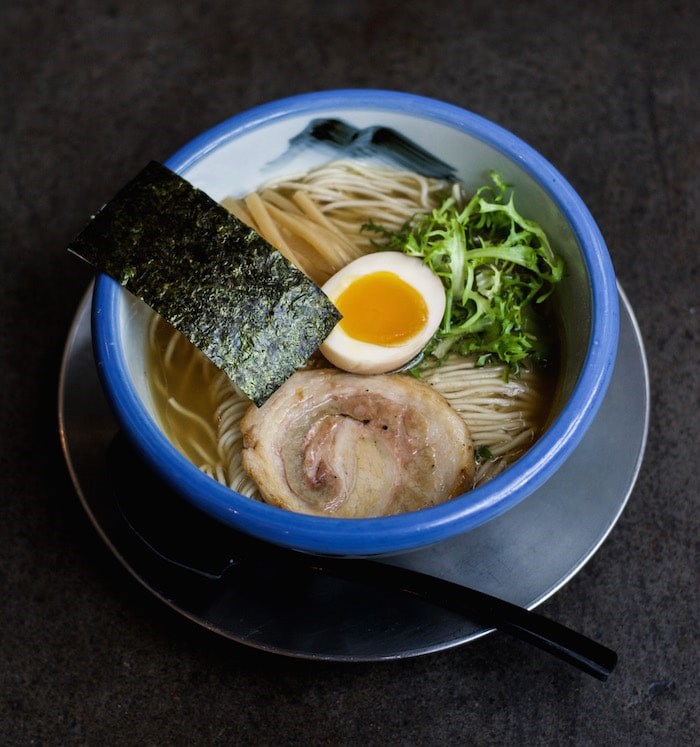 "Afuri's specialty is yuzu shio, a ramen made with a clear broth called 'chintan' and labeled simply 'chicken broth' on the menu," explains Eater Portland, adding that this chintan broth is prepared at a lower temperature than its familiar broth counterpart, tonkotsu.

In addition to their Yuzu Shio and other chicken broth-based ramen, Afuri's ramen selection includes tonkotsu-style (pork broth), tsukemen (cold noodles), and a hazelnut broth ramen. Their noodles are made in-house and come in thick and thin.

Elsewhere on the menu you'll find small plates, like fried shishito peppers and stuffed buns, as well as dumplings, and "gohan" dishes - which are dishes served over rice. Their drinks menu includes cocktails, shochu, sake, whiskies, and multiple non-alcoholic beverages.

Afuri also offers an electronic ordering system where customers can order from kiosks on their own and customize their meals.

David Chan and Eric Ho, co-owners of Richmond’s Afuri location, said they are excited to bring what they believe is some of the best ramen in Tokyo to Richmond, and are glad to be able to work with the Afuri franchise.

“We got a lot of support and help which allowed us to open Afuri here in Richmond,” said Ho.

The co-owners explained it was difficult finding a place to open up a store in downtown Vancouver because “locations weren’t ideal,” which brought them to Richmond.

“There are many ramen places in Richmond, but because the city is very community-based, it aligns with Afuri’s mission to bring people together through food,” Ho added.

Grant MacDonald, Afuri’s corporate director of culinary operations, said that Afuri is “lucky” to have found such great partners for their Canadian opening.

“They’re a very serious and committed group who were excited about Afuri and thought they would do very well in Vancouver.”

Chan said “everything comes back to the ramen” and the environment it’s eaten in.

“The ramen is one of the important aspects of Afuri, but so is the total experience from entering the space, customizing the bowl (of noodles) and eating it.

“What makes [Afuri's signature] Yuzu so special is that we are the only ones in the Lower Mainland that will be making it from scratch.”

Chan said that with Afuri’s first Canadian location, they hope to raise ramen standards and set a higher bar for other ramen locations that will open.

The restaurant will seat approximately 45 to 50 customers in an open and industrial-style dining environment.

This article originally appeared on V.I.A. on July 8, 2019 and has since been updated.