Will beer in a box be coming to B.C. soon? 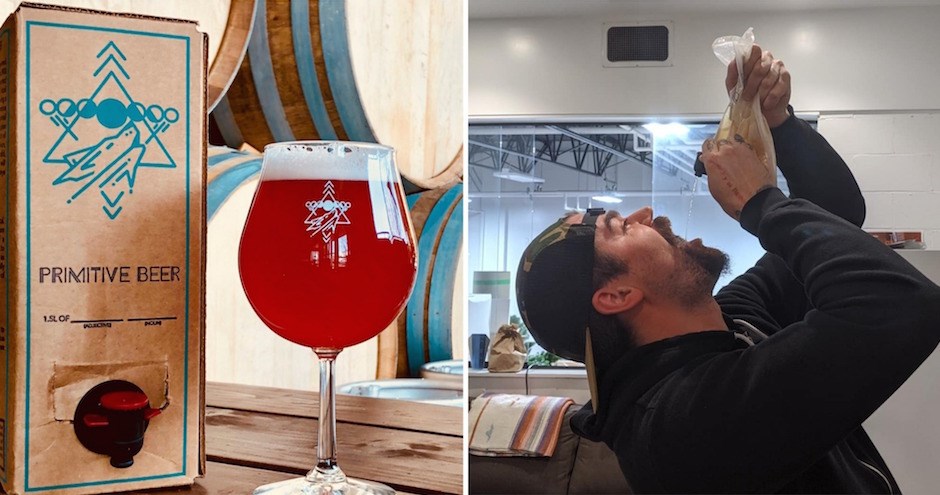 Left: Colorado's Primitive Beer has pioneering the use of boxed craft beer in the U.S. Photo courtesy of @primitivebeer. Right: Jackknife Brewing's Brad Tomlinson is a big fan of the bag-in-box format for wood-aged sour beers. Contributed photo

So boxed beer is a thing now. It’s true. And before long you’ll be able to get it here in B.C. if at least on brewery has its way.

The bag-in-box technology is nothing new, of course. Developed for the wine industry in Australia in the 1960s, it might be our sunburnt cousin’s greatest gift to the world—along with the Hills Hoist, the Splayd and Ugg boots.

“Goon”—as it is often referred in its native land—is not associated with quality, however. Generally, the wines that end up being boxed are cheap and plonkish, better suited to hard partying college kids and food service value offerings, rather than vintage Bordeaux. The plastic bladder also makes a handy inflatable pillow for when you inevitably pass out.

However, Belgian lambic brewers have quietly been offering their uncarbonated sour ales in bag-in-box format since the 1980s, apparently. And for good reason: the beer-filled bag is brilliant for keeping out oxygen, which is terrible for beer as it imparts papery off-flavours, kills hop character and in sour beers can cause vinegary notes at higher temperatures. The bag-in-box format has also found a friend in real cask ales, thanks to their low levels of carbonation. Now craft breweries in the U.S. are getting into the act, too.

As far as consumers are concerned, there’s a lot to like about boxed beer. With a capacity of up to six litres, it’s a great way to take a lot of beer with you. It’s also a cost-effective packaging format that allows beer drinkers to save by buying in volume, without worrying about spoilage. I’m sure we’ve all dumped a half-empty growler or two that was tucked away in the nether regions of the fridge and forgotten about.

Also, goon is fun! You can take the bag out of the box and squirt it into your mouth like some boozy udder. It’s also customary to slap the bag when drinking lambic straight from the nozzle in order to better “activate the flavours.” Which is complete nonsense. The beer-filled bag has the shape and consistency of a rather large buttock, so humans being humans, we are simply naturally drawn to smack dat ass.

Obviously, there are limitations. If you were to put a brut IPA in a bag-in-box, it would promptly explode. The bags are not designed to withstand a lot of pressure, so that limits the kinds of beers you can put in them. Then there’s the puncture risk.

While no B.C. breweries currently offer boxed beer, at least one has loose plans to introduce it. Kelowna’s Jackknife Brewing is set to open any day now, and owner/brewer Brad Tomlinson says he’s intrigued by the idea. He recently tried boxed beer from Primitive Beer—an exclusively spontaneous, barrel-fermented beer blendery and brewery in Colorado—and he thinks the idea could work here in B.C. Given Jackknife’s stated objective of producing weird-ass beers in weird-ass ways, I think it’s probably the perfect candidate to give boxed beer a test run.

“I think for that style of beer, the wood-aged sour, it is a great way to package,” explains Tomlinson. “I feel like the obvious comparison would be boxed wine, but that almost cheapens it as the majority of people associate boxed wine with a trashy product. Primitive Beer is handling it pretty nicely; it's in a bladder so there's no oxygen ingress when you crack it, so you can sip on it over a longer period. It’s in a nice package to take around with you if you wanted to share that experience with others once you've cracked it, as well.”

So will boxed beer become the next growler or crowler? Definitely not. But I do look forward to chugging some of B.C.’s finest beers straight from the bag very soon.