Cozy up with this Beer and Cheddar Soup by a Vancouver restaurant chef, using a local IPA (RECIPE)

Born in the UK and raised in the Caribbean, New York City and Montreal, Tuc Craft Kitchen executive chef Roy Flemming has spent more than two decades in the kitchen, blending classical techniques with inspiration from the rustic flavours and family traditions of the far-flung locales he has lived.

At Vancouver’s Tuc, Roy has created a menu that is seasonally informed, locally sourced and showcases his signature brand of nourishing comfort food that is artfully prepared and plated. 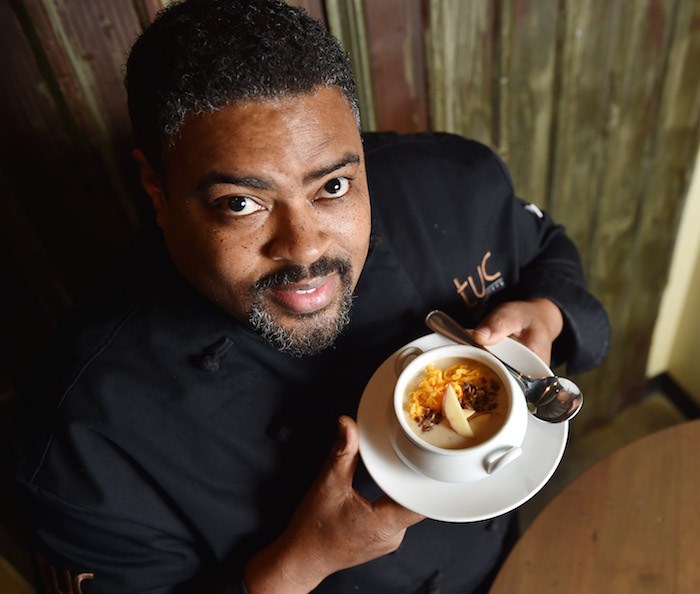 Why do you love this recipe? Is there a personal anecdote behind it you can share?

I created this beer and cheddar soup for our fall menu at Tuc with the intention of celebrating all that this season brings. As a child, I used to go apple picking in the fall and our family would make pies, crumble and apple cider. One of my favourite snacks growing up was apples with cheddar cheese; I took inspiration from this combination and created a hearty cheddar soup featuring apple cider and a great craft beer.

Tell us why you chose this beer? What sort of foods does it pair well with?

I chose Strange Fellows Brewing Guardian White IPA because of its aromatic intensity, balance and mild hoppiness. I find this beer quite versatile, pairing nicely with a hearty salad or pasta as well as a few bar snacks like spicy wings or a Tuc favourite, pork belly with star anise red wine reduction.

What are some general tips you have for cooking with beer, specifically with soups or sauces?

Always cook with a beer that you like to drink, as the characteristics will be evident in the final product. Beer with a higher alcohol content will be more bitter than one with a lower alcohol content so go easy when pouring to ensure balance. IPAs, stouts and pale ales tend to go with hearty foods while lagers and pilsners typically pair best with lighter foods. 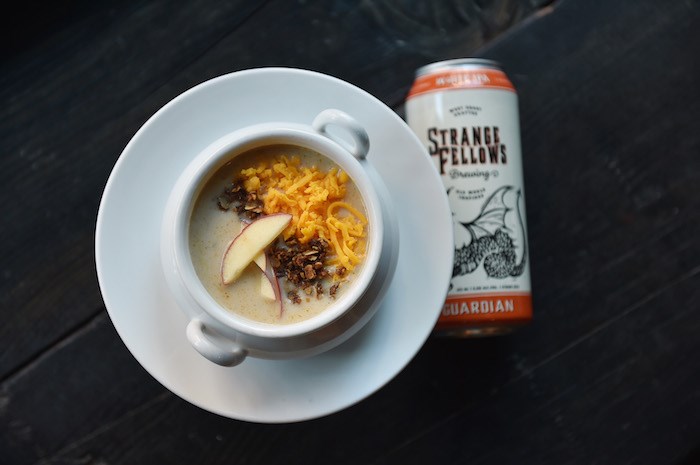 For the oat crumble

2. In a bowl combine the oats, flour, brown sugar, cinnamon and salt.

3. Add the softened butter and use your fingers to crumble it into the oat mixture until everything is moist and the butter is evenly distributed.

5. Bake for 20 minutes, stirring halfway through cooking, until crisp and golden brown and smells amazing.

1. Add oil and onions to a pot and cook for 15 minutes on medium heat

2. Add flour and stir and cook for three minutes

3. Pour in beer and cook for five more minutes.

5. Add whipping cream, cheese and salt and pepper to the soup and simmer on low heat for 30 minutes.

6. Remove from the stovetop and allow soup to cool to 70C within two hours and 40C within 4 hours.

7. Serve and garnish with oat crumble and a large pinch of shredded cheddar cheese.

People are lining up down the street for this Coquitlam doughnut shop
Jun 24, 2021 6:00 AM