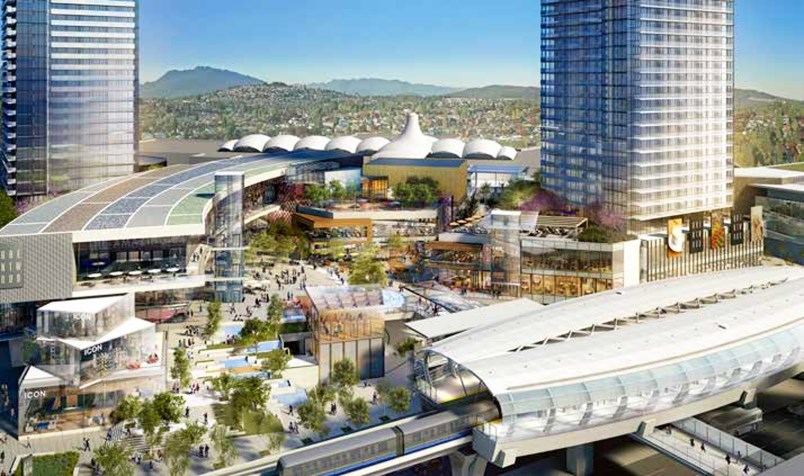 A rendering of the Amazing Brentwood project. Shape Properties image

A major restaurant has pulled out of the Amazing Brentwood mall expansion project.

Cactus Club had committed to moving into the new wing of the mall, but Shape Properties, which is developing the growing shopping mall and multiple residential towers on the site across from the Brentwood SkyTrain station, told the NOW this week that that no longer happening.

Shape now says it’s working on a deal for another major chain restaurant to move into the space previously reserved for Cactus Club, which already operates a restaurant on Lougheed Highway just a few blocks west of the Amazing Brentwood. Cactus Club also operates restaurants at Station Square in Metrotown and Market Crossing in South Burnaby.

This is the second company that has pulled out of the Amazing Brentwood, as a Steve Nash Fitness World location was supposed to move before the company imploded in 2020. But Shape says it has just signed a new deal for Evolve Strength to open a new fitness facility in the mall that will draw upon a large number of residents in all of the huge residential towers that have been built and will be built in the future.

To date, 10 stores are now open, including the Sporting Life and Nike, and the mall is now 90% leased out.

With its humble beginnings as that "pinche" tacho shop on Hastings Street on the edge of Gastown several years ago, La Taqueria has grown to include two additional Vancouver outposts, as well as one in North Vancouver and one in Victoria. A third Vancouver location, on Main Street at Broadway, closed up last summer in order to make room for the subway (the train, not the sandwich chain).

The roster of planned food tenants is shaping up quite nicely for the Amazing Brentwood. There are some fast food usual suspects in the mix, but also some local spots spreading their wings, like Persian restaurant Cazba; gelato shop Bella Gelateria; pork cutlet specialists Saboten (they're also at Aberdeen in Richmond); and Vancouver bakery cafe Small Victory.

And there are a couple more spots to watch for food fans when it comes to what's coming to the Amazing Brentwood. Calgary-based OEB Breakfast Co., which opened its first B.C. location in Vancouver's Yaletown neighbourhood, is moving in. Plus, Cineplex's highly-anticipated Rec Room is also setting up there.

Basil Box, the Toronto-based Thai chain, is already up and running.