After seven busy, community-building years, one of the only upscale eateries in Hastings-Sunrise is closing the lid on its last pizza box. Campagnolo Roma opened at the corner of East Hastings and Garden Street in 2011 as a satellite of chef Robert Belcham’s popular Main Street Campagnolo location.
Grant Lawrence Oct 29, 2018 1:41 PM

So long and thanks for all the pizza.

After seven busy, community-building years, one of the only upscale eateries in Hastings-Sunrise is closing the lid on its last pizza box. Campagnolo Roma opened at the corner of East Hastings and Garden Street in 2011 as a satellite of chef Robert Belcham’s popular Main Street Campagnolo location. Both restaurants take inspiration from rustic northern Italian cuisine, while Roma focused on the specialties of the Italian capital. 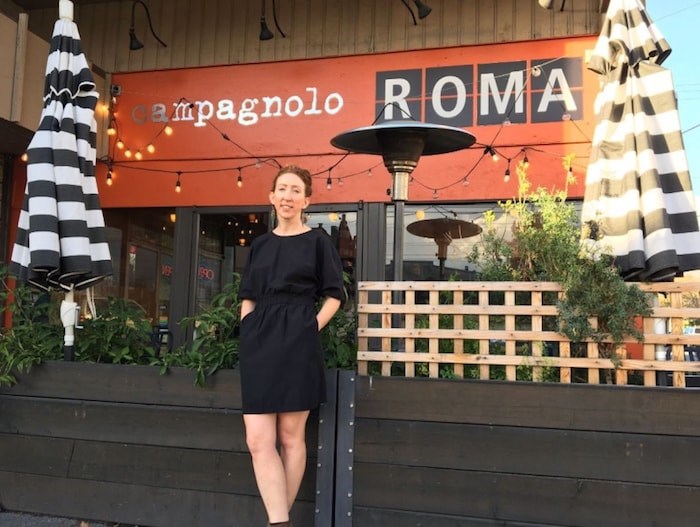 Campagnolo Roma general manager Sarah Jensen: “A neighbourhood restaurant like this is about community on a certain level, and I will really miss that.” Photo Grant Lawrence

When Roma opened its doors at 2297 East Hastings, it helped kick start a restaurant boom in the area, along with Tacofino, What’s Up? Hot Dog, Trans Am, Jackalope’s, Red Café, Yolks and Wagon Rouge.

Over the course of Roma’s run, the cozy restaurant with the sweet patio became the local eatery of choice for special occasions, whether it was an anniversary, birthday, homecoming or graduation.

“We’ve seen it all in here over the years,” Roma’s general manager Sarah Jensen told me. “I remember one time a family moved to this neighbourhood sight unseen from the U.K. On their first night, they were walking around and spotted our restaurant. We served them their first dinner in Canada. That was years ago and they’ve been coming ever since. Every time they get visitors from out of town, this would be the first place they come for a meal.”

My family has a very personal memory connected to Roma and its oh-so-delicious food. On the night our first child was born, my wife went into labour in a planned home birth. Our midwife told me my wife would likely be extremely hungry after the birth and to be sure to have some good food on hand. I headed to Campagnolo Roma for some pasta to go. At around midnight, our son was born. At about 1 a.m., my wife devoured that pasta like a hungry wolf.

Jensen was working that rainy night in August, wished us luck, and has since seen my son grow up to devour Roma’s top-selling margherita pizzas like a hungry wolf cub.

“I had another moment like that the other night,” said Jensen. “The restaurant was full and a mother and daughter were sitting at the bar. I realized that I had met that little girl when she was three and now here she is at 10, and I’ve watched her grow up. Every day is like that in here. It’s made me realize that it’s not just about your money for our food. A neighbourhood restaurant like this is about community on a certain level, and I will really miss that.”

No concrete reason has been given from the ownership group to Jensen or the restaurant’s staff for the closure, but lack of diners wasn’t the problem. The reason is likely financial.

There were rumours the restaurant had fallen into the red, but staff had been working hard trying to put it back in black.I reached out to Campagnolo Roma’s co-owner, executive chef Robert Belcham, who sent me this reply via email:

“I feel heartbroken for the staff and customers that made Roma so amazing. The one constant in life is change, and either you go with the proverbial flow or you drown. Roma had an absolutely amazing run. I cannot say enough good things about the staff and the vibrant neighbourhood. We look forward to continuing what we do at Campagnolo Main Street and hope our Roma regulars join us there.”

Customer reaction to the polished family restaurant’s impending closure has been emotional.

“Last week we had a man actually get angry about it,” Jensen told me. “Roma is part of their family routine. Every Friday night he and his wife and kids come in for dinner. For them, Friday night at Roma was a thread of stability within their family.”

Most of the kitchen staff at Roma will be absorbed by the Main Street location. The eight to 10 front-of-house staff, including Jensen, are being laid off, but Jensen was quick to point out that there is no shortage of work for quality servers in Vancouver.

As to what might open in Roma’s place at Hastings and Garden, Jensen offered a challenge. “What I want is this — whatever new restaurant that opens here needs to be better than Roma. The bar is high.”

Over the course of its time in the neighbourhood, through fine food and atmosphere, this little restaurant reminded us that there is nothing more communal than breaking bread with friends, visitors, and loved ones. Roma, you will be missed in our tummies and our hearts. Grazie.