Chances are, if you've lived somewhere west of the Rockies and north of the 49th, you've heard of Dine Out Vancouver. In its thirteenth year of operation, DOV has encouraged culinary exploration of our city, and for the third year, they’ve held Street Food City III, a food truck gathering set at one of Vancouver’s most recognizable buildings: the Vancouver Art Gallery. No fewer than twenty-three food trucks were showcased over the last five days, and I had the pleasure of being able to visit all of them within the VAG’s cozy courtyard and peruse the eclectic menus and diversity of offerings on display. 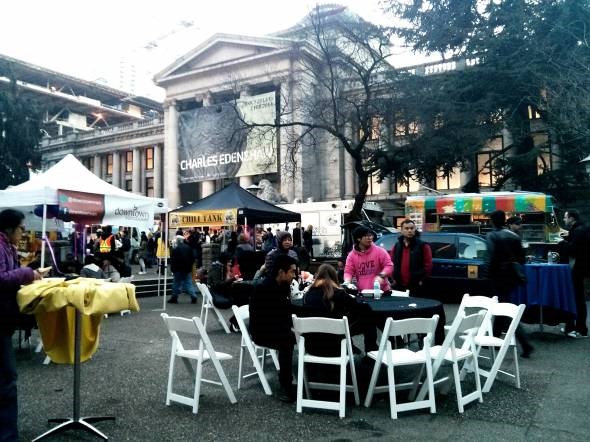 DOV at the VAG

Having tried almost every food truck there, I can say with certainty that nothing sucks. Some people’s palates might be more aligned with particular types of food, but I can assure you that we definitely have an embarrassment of riches when it comes to the quality and volume of Vancouver food trucks. There’s still an inexplicable fascination that people have with food trucks centred around cheese, because the biggest lineups when I walked by were at Mom’s Grilled Cheese and REEL Mac. I’ve tried them before (and liked them), but I wanted something different that day. 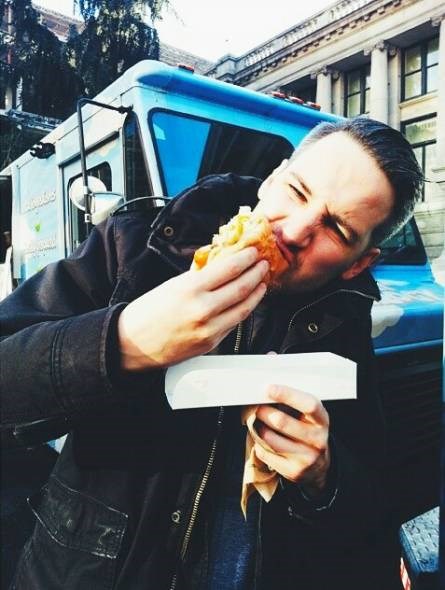 My friend Dave will gladly try any hot dog he sees, and he’ll give me his honest opinion on its texture, complexity, flavour-meshing components, appetite-satiability, and overall tastiness. He had never tried a Dougie Dog before, and didn’t get a chance to visit its former Granville location before it was converted to a three-piece food truck operation. Well, being a lover of all things cheese, he got the Charlie Mac Dog, a beast of a hot dog covered in mac n’ cheese and bacon. The verdict: abundantly cheesy, great texture, filling, and the flavours were well-balanced throughout. He described it as one of those meals you get that makes everyone else ooh and aah, then look at their own food sadly, wishing they had gotten a hot dog. The Dougie Dog’s quality would satisfy even Michael Pollan: locally sourced, hormone-free meat, with no weird additives. And their butterscotch root beer is nothing to sneeze at; stringent root beer connoisseurs will nod in indulgent approval. 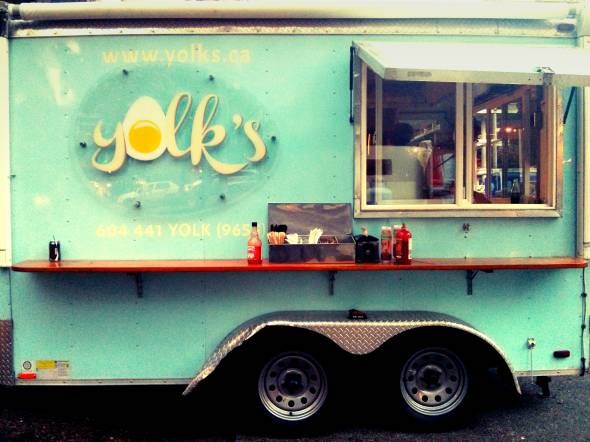 Adorable trucks always get my attention.

My mood was stranger, and I struggled to find something to fit my finicky appetite. And then I saw Yolk’s, and having breakfast at 4:30pm suddenly became the best idea I’ve ever had. I asked for something small, and they suggested a single egg sandwich, perfect size for a snack. When they ask you if you want cheddar cheese or hollandaise sauce on it, always opt for the hollandaise. Normally, I would avoid it at all costs, following a horrific experience on BC Ferries (a story for another time). But Yolk’s makes their own hollandaise and they take their time to make sure it’s smooth and not overcooked, a feat I've never quite been able to master. Excellent breakfast sandwich, so I applaud you, Yolk’s. If you can’t make it to their food truck for whatever reason, they’ve also recently opened a fixed location restaurant at the corner of Clark and Hastings. They’ve worked through the kinks of having just opened last month, so now’s a good time to check them out. 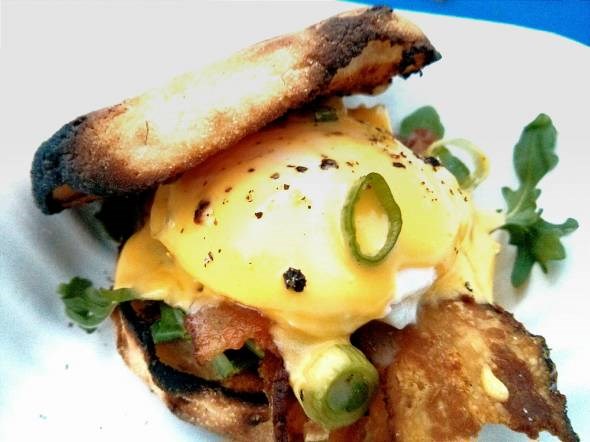 Look at that beautiful sammich.

I was reminded of the Jim Carrey late-90’s classic The Truman Show as I walked through the food trucks at the VAG. There’s a scene where a schoolboy-aged Truman says in class, “I want to be an explorer, like the great Magellan,” and his teacher pulls out a map of the world and says “oh, you’re too late; there’s really nothing left to explore.” Of course, the point was that there was so much more that he had to discover, but he didn’t know it yet. Open up your Street Food Vancouver app and be Magellan in your own city. There's so much left to discover locally, so go take your stomach on an adventure, then let me know how your foodie undertaking goes! @tonyhajdu