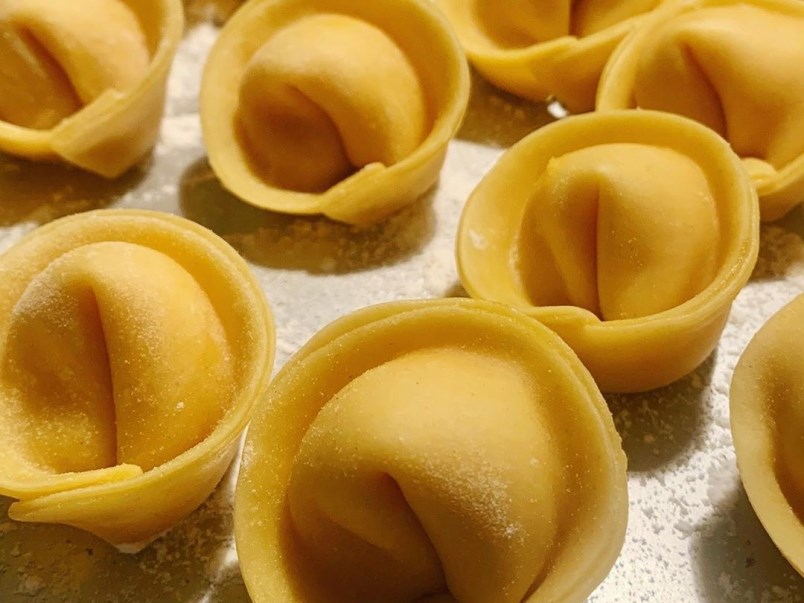 From the debatable first noodles found in a bowl buried under three metres of dirt in northwestern China, Italy’s claim to the staple has exploded into a daunting list of about 350 varieties.

No wonder outsiders to Italy’s culinary traditions mistake tortelloni — filled with cheese — with its Bolognese (or is it Modenese?) cousin tortellini, one stuffed with meat.

The fact that tortellini is celebrated Feb. 13 — Tortellini Day, for those counting food holidays — a day before Valentine’s Day, turns out to be a bit of serendipity when you consider how the pasta is said to have got its start.

The origins of the infamous ring-shaped casings trace their roots to the middle of northern Italy, in a village called Castelfranco Emilia. They were conceived, the legend says, when a peeping innkeeper spied through the keyhole of a guest’s door, only to be stunned by the sight of Venus, the goddess of love, and in particular, her navel.

As a tribute, the innkeeper retuned to his kitchen to roll out and twist up the bellybutton-shaped shells.

The first tortellini recipe is thought to have appeared in 1570, written by Bartolomeo Scappi, chef of the Pope Pio V. Over the years, the traditional tortellini recipe has changed remarkably little. For years in Bologna and Modena, tortellini was seen as a special Christmas Eve meal, sealing away Parmigiano Reggiano or ricotta, mortadella or prosciutto —  “the rich fillings of prime cuts… pounded to a paste and seasoned with salt pepper, and nutmeg,” according to The Oxford Companion to Italian Food.

But while tortellini has brought people together to celebrate, it has also been a source of fierce, though perhaps friendly, competition. Before Benito Mussolini reigned in an Italian era of fascism in the lead-up to World War Two, Castelfranco Emilia belonged to the county of Bologna but thereafter was moved into Modena province. Now, every year, the two sides field a panel of chefs in annual competitions that offer a rotating mantle of culinary superiority.

Yet outside of Italy, pasta is open to experimentation and the the influences of both home cooks and seasoned chefs.

Take Port Moody chef Dennis Peckham, whose entire philosophy of pasta has been filtered through his experiences working in some of the best restaurants in North America.

Peckham, who appeared on the reality cooking shows Top Chef Canada and Chopped Canada, spent years at Lumière in Kitsilano before heading south to cook at the legendary French Laundry in Napa Valley, once described by the late Anthony Bourdain as “the best restaurant in the world. Period.”

Now the executive chef at the Fairmont Hotel Vancouver’s Notch8, Peckham said making pasta — along with traditional North Indian cuisine and authentic Mexican dishes — has become part of his home cooking routine, an outlet that lets him unwind.

“I get my fix cooking what I want to cook,” he said. “I find it therapeutic… I put some music on and my dog sleeps at my feet.”

But, Peckham told The Tri-City News, cooking five courses of Indian food is a lot of work, so to make it more fun, he now routinely invites around six strangers to his house through his Instagram page.

Instead of asking for money, a pass to a homemade dinner and mini cooking lesson comes through a donation to the BC SPCA.

“I like the process of it all. I love the prep. I like to challenge myself with knife skills,” he said.

When it comes to tortellini, the Port Moody chef said he still sticks to the old French Laundry recipe for the dough — a traditional combination that calls for eight ounces of flour, one whole egg, six egg yolks, one and a half teaspoons of extra virgin olive oil and a tablespoon of milk.

The filling, said Peckham, follows the seasons. In the late summer, he’ll sometimes stuff tortellini with ricotta and toss them in olive oil, fresh tomatoes and basil. But for this time of year, he suggests something heavier, like a potato, marscapone, chive filling, “almost like you’re eating pirogies,” he said.

“A lot of people are intimidated to make pasta,” he added. “I could teach you how to make tortellini in 10 minutes.”

One of his favourites combines two recipes from two of his most formative experiences as a chef, the pasta from The French Laundry and a filling developed years ago at Lumière, a combination of roasted squash…[waiting for full recipe]

“The great thing about pasta is it’s so adaptable,” said Peckham.