In a little 36-seat diner, smuggled into the working heart of the Steveston Harbour Authority, the menu items are as earthy as the humour that’s on special.
0
Sep 18, 2019 10:14 AM By: Alan Campbell 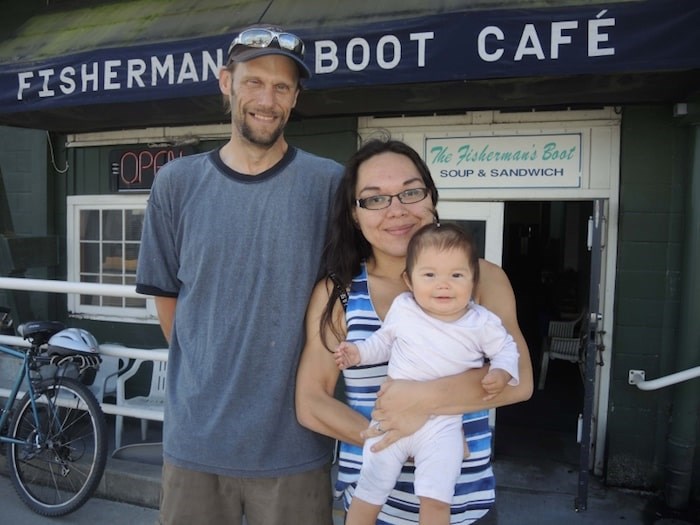 Jason De Ruiter and his wife, Mary Lou, with their little girl Cecilia. The family took recently took over the running of the rather unique Fisherman’s Boot Cafe, deep in the heart of Steveston Harbour. Photo by Alan Campbell/Richmond News

In a little 36-seat diner, smuggled into the working heart of the Steveston Harbour Authority, the menu items are as earthy as the humour that’s on special, every single day.

The Fisherman’s Boot Café is about as off-the-beaten-track as you can get in Richmond and is one of an apparently dying breed in the city – the family-run “greasy spoon.”

It’s unashamedly down-to-earth and takes pride in having few frills, aside from the caustic wit-infused decals festooning the walls, courtesy of its former owner, Penny Challoner, who ran the joint for 24 years.

The café is now run by her son, Jason De Ruiter, and his wife, Mary Lou - who took over the running of the 30-year-old eatery earlier this year – who are happy to let Challoner’s “charm” remind their loyal customers what they’re missing.

“Some of them miss her. Some are happy that she’s not here as much,” laughed Jason.

“Some people didn’t like her sense of humour. Just look around here. And take a look at the menu.”

Referring to herself on the menu as “The Old Boot,” Challoner still demands that customers eat all their food or it’ll be frozen for their next visit and warns they risk getting “the look” from “The Boot” if they don’t place their order at the counter.

Other wooden plaques dotted around the booths and behind the counter bark orders at customers and insult the patrons.

Sense of humour aside, the café – which used to be the BC Packers warehouse lunchroom – has a surprise or two up its sleeve, or down its boot, if you will.

Every Thursday it has a two-piece fish ‘n’ chips for $10.50 and it sources the beef for its home-made burgers from a farm in Richmond, Harold Steves', no less.

“Some customers who can’t make it on a Thursday will ask me to keep them (a fish order) aside for the next day,” said Jason, a former commercial salmon fisherman of 29 years, who gave up the sea to spend more time with his baby daughter, Cecilia.

“The beef I use for the burgers is raised here in Richmond, hormone- and steroid-fee and grass-fed. And when the potatoes are in season, I buy from a farm at No.3 Road at Steveston Highway.”

Asked why such apparently fine ingredients aren’t reflected in the “greasy spoon” prices, Jason explained that they don’t have any staff and don’t take a wage.

“We did raise the prices a little. The price of the hamburger has gone up, for example,” he said.

“A lady recently said it was the best burger she’d ever eaten and customers have given five-star ratings on the burger. The flavour is so good.”

Jason said he has no immediate plans to change the place, other than to expand his customer base beyond the core group of fishermen, retired and working, harbour staff and a few local residents.

“I changed the sign outside to ‘public welcome,’ as a lot of people get scared by the big gates,” he added, referring to the big yellow gates leading into Steveston Harbour Authority on Trites Road.

“I’m trying to get the word out there that we’re open to the public. And I’ve also not long started on Uber Eats.

“I’ve had a few customers on there, so I think that’s where I can expand a bit, as well. There used to be more commerce here, so that’s a challenge. We have to work a bit harder to build the customer base and bring more people in.” 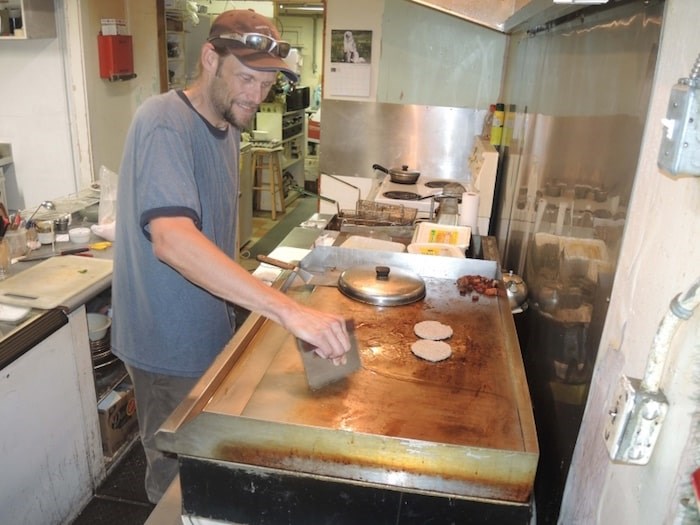 Jason De Ruiter is proud of his cafe’s “greasy spoon” tag. People might be surprised to hear his burgers are made from steroid- and hormone-free beef sourced from Harold Steves’ farm in Richmond. Photo by Alan Campbell/Richmond News

In the meantime, Jason and Mary Lou are content to wear the greasy spoon tag with pride.

“That’s where you get the best food, right? It’s like a home-cooked meal in a diner atmosphere...a little hole in the wall.”