I think it's 'fair' game to say this is one of the best food fairs in the lower mainland. For the longest time I backed the one in Yaohan but this place has surpassed it, I think it beats Crystal .
Jef Choy Dec 10, 2010 8:16 AM

I think it's 'fair' game to say this is one of the best food fairs in the lower mainland.  For the longest time I backed the one in Yaohan but this place has surpassed it, I think it beats Crystal.  At first glance it's easy to say, 'It's all just Chinese food' but no way, this place has it's bases covered.  Thai, Korean, Vietnamese, Chinese, Japanese, they have it all, and they are well known establishments too like Jang Mo Jib, Beard Papas, and my favourite.  And just so no one feels left out, they have a White Spot, if I didn't go to Giants games so often, I might have gotten one.  The place is designed by Bing Thom too which adds to my case. 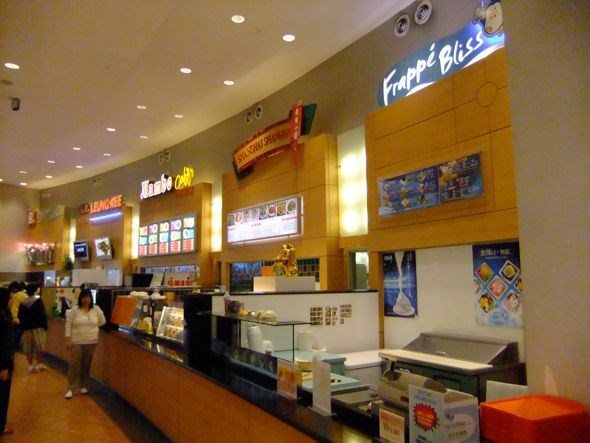 Now....I could also go on about what's it like driving around this neck of the woods, but I don't have to, the Canada Line makes it so easy to get out here now, and you would never believe what happened to me the last time I went out here.....

OK...I don't actually take transit as often as I should, and because of this, when I take it, I'm always nervous.  No one wants to be that dude that gets busted by transit police, or the guy that's holding up the whole bus trying to put his ticket in the right way, so I try to make sure I have my act together.

So on this particular occasion, I was taking the Canada line out to Aberdeen, and Sue Choy who does take transit, gave me a ticket.  She did this, because she knows that I am emotionally scarred from a bad incident trying to buy a subway ticket in Japan (I caused shame).  I somehow have convinced myself that the dispensers on the Skytrain are equally as complicated.  This time, all I had to do is validate it....piece of cake....

So I'm at the validation machine getting all confused as to which way to insert it, 'does it mean black strip on black strip or you put it in the same way as the picture!!!'.  I mean, there are only so many ways you can put the stupid ticket in, but I'm getting all worked up.   I was deeply in a self involved hissy fit, until I hear one of the few things that can snap me out of it......

That's the sound of money.

I look over an the ticket machine next to me is spitting out change.  In my fantasy I always hit the coin return, but that's not how it was going down, no one was around, and it was full blown slot machine.  You know that dream you have where you can't run, this was like the same deal, but I couldn't fill my pockets fast enough, it was like I had the hands of a five year old.  I'm sure it was a matter of seconds but it felt like minutes, eventually the machine stopped.  With my pockets heavy with change, I miraculously validated my ticket, and hopped on the train.

Paranoia set in quickly as I noticed all the cameras, and the people....they were looking at me.  Of course this had nothing to do with the $25 worth of change in my pocket but that I looked like the Cheshire Cat from Alice in Wonderland.

Now I know this trip to Aberdeen was a dream come true which is not an everyday thing, but I realize that this was theft.  Which is why I'm willing to give the money back.....in exchange for the tapes, because I'm sure the footage is priceless.