A Vancouver Island printmaker is shellebrating after biting into an oyster and discovering 48 pearls.
Louise Dickson
Sep 11, 2019 11:49 AM 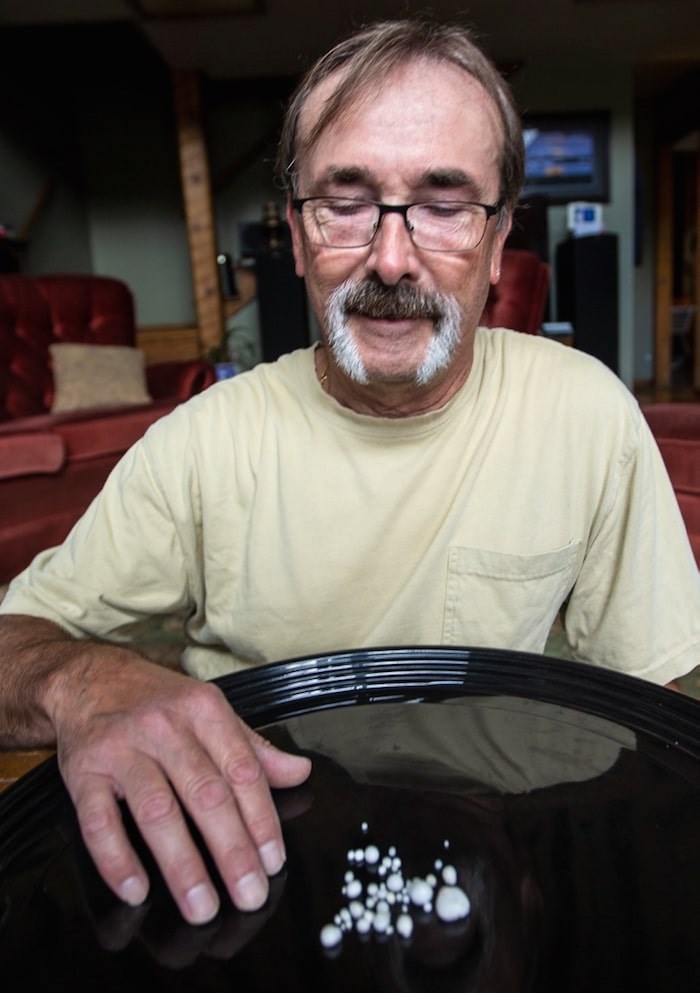 Eric Bourquin shows the pearls he found inside an oyster. Photo by Darren Stone/Times Colonist

A Vancouver Island printmaker is shellebrating after biting into an oyster and discovering 48 pearls.

Eric Bourquin and his wife, Alice Dehen, were enjoying pan-fried oyster appetizers at their friends’ home in Saanichton on Saturday evening.

When Dehen looked over at her husband, she thought he was choking. Then she realized he was spitting out pearls.

“I was like: ‘Wow. Look at that.’ We thought it was over, but he kept pulling out these little tiny pieces. It was quite an experience,” she said Tuesday.

Bourquin said he had already eaten two nice big flavourful oysters and was standing around, chit-chatting with his friends Marnie and Ross Wilson. He grabbed a third smaller oyster and took one bite.

“Half of it was in my mouth. I thought I’d bitten into a bunch of rocks. They really crunched,” said Bourquin.

“I thought: ‘Oh man, this is damage to my teeth.’ So I started picking out what’s in my mouth expecting it to be rocks and it’s pearls. And there must have been a dozen of them in my mouth and we’re all standing around going: ‘Wow. Unreal.’”

Every year, Ross Wilson skis at Mount Washington and collects oysters on his way home in a secret spot south of Courtenay, said Bourquin. He freezes the oysters in their own juice. When he’s ready to eat them, he boils them, coats them in a seasoning sauce with tarragon and fries them in butter.

“We’ve lived on the West Coast all our lives and Alice has found a small pearl once. I wouldn’t want to have the experience of almost breaking my teeth again but just finding them was pretty neat,” Bourquin said.

The women are planning to pick through the pearls and choose the ones they want to keep, he said.

“My wife was thinking of making a pendant or maybe some earrings or a ring. Lots of possibilities. There’s some big enough there. You could string it up.”

He realized the pearls are probably not worth much. “But if someone wants to offer me a million bucks I wouldn’t say no because then I’d have to split that with my friends, too, and we’d all be happy,” he said with a laugh.

“It’s something we can tell our friends and family for years to come. We were all amazed so many could be in one oyster.”

“Forty-eight would be a lot, but not unheard of,” said Green.

“Often, when I’m doing research, I’m dissecting oysters and I find little pearls. At other times, I’m eating an oyster and you actually do feel a bit of crunchiness and think: ‘Hang on, that’s not shell. That must be a pearl.’ I think most people would associate it with a bit of shell from when they are shucking an oyster.”

Even though Bourquin’s pearls are not shiny or perfectly smooth and round, Green thinks it’s quite likely they are true pearls.

When a grain of sand intrudes, the oyster tries to ward it off by creating a barrier around the particle and encasing it in a shell.

“The difference between a Pacific oyster and a south sea pearl is that they’re made out of a different kind of calcium carbonate,” Green explained.

“Your shiny pearls that we wear in jewelry are made by pearl oysters in the tropics. They’re made out of a calcium carbonate called aragonite. It’s very, very shiny but it’s quite brittle. It’s the kind of shell you associate with mussels and abalone.”

Pacific oysters make their shells out of a calcium carbonate called calcite, which is a white, chalky, not shiny shell, said Green.

These pearls are of very little value.

“But I have a little private collection that I’ve kept out of curiosity for myself from oysters that I’ve eaten around the world. I actually have about 10 or 12 Pacific oyster pearls. They’re not shiny. But you’re at a restaurant and you suddenly realize you’ve got a pearl in your mouth.”

His favourite Pacific oyster pearl was almost eaten at a restaurant in Seattle.

“I was there about 10 years ago, having a lovely meal and ordered some oysters and got this absolutely perfectly round pearl about the size of a pea. I’ve kept it ever since,” said Green. “It’s one of the enjoyments of eating an oyster.”