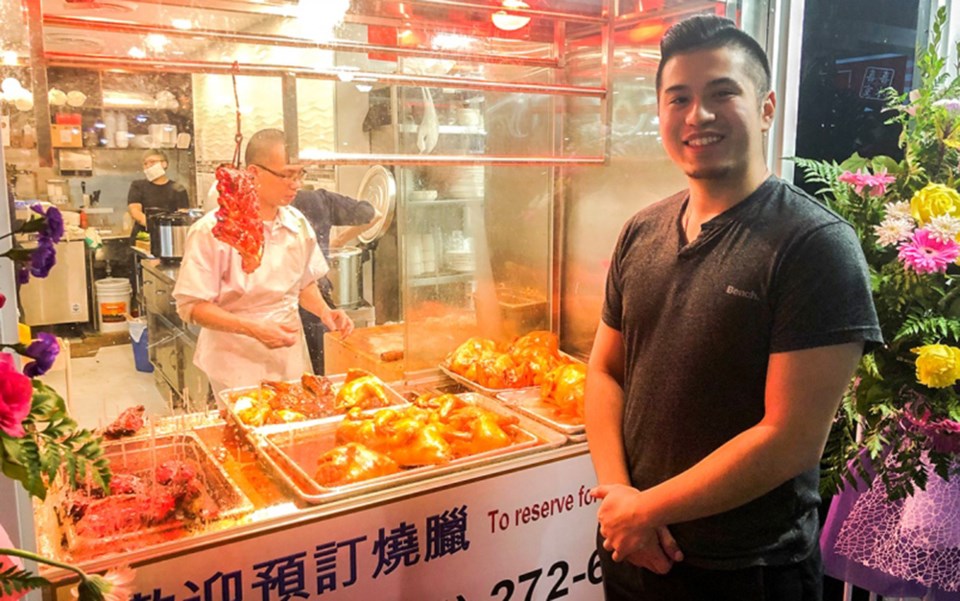 Anson Leung hopes to expand HK B.B.Q Master to other parts of the Lower Mainland. Photograph By Steven Chang

A second-generation Chinese barbecue restaurateur is determined to not let his family’s traditional cuisine become a dying art.

Anson Leung, 28, son of the owner of Richmond’s HK BBQ Master, believes traditional Chinese barbecue could be lost as his peers turn away from the restaurant business.

“My dad was the last generation cooking traditional Chinese barbecue. Being a cook was looked down upon in the society as a low-end job,” said Leung.

“Now, no one wants to go into the restaurant business (besides) it’s a lot of work.” As a result, a lot of Asian kids have been pressured by their parents to be engineers or doctors, he added.

Leung’s parents, however, have always supported his choices, and hard work doesn’t scare him.

But, more importantly, the lineups of customers outside his family’s restaurant waiting for a table have convinced him that what his family has to offer is, in fact, something to be proud of. HK BBQ Master has won multiple awards.

This year, for the ninth time, the restaurant was crowned Best BBQ Shop in Vancouver by the Chinese Restaurant Awards.

It was also recognized as the Most Voted Restaurant in 2019. On top of the awards, the restaurant earned some celebrity status in October when actor Seth Rogen and celebrity chef David Chang stopped by the restaurant during the filming of a Netflix series Breakfast, Lunch & Dinner. Since then, the restaurant has been closed while it underwent interior renovations, but it’s now back again serving old-timers and welcoming new faces. Leung said the main reason to renovate was to keep the restaurant running for another 15-20 years.

“Everything was getting old, things were breaking and leaking. We wanted to have a better foundation for the restaurant to last a long time,” Leung said.

Now that the Richmond shop is on firm ground, Leung plans to expand into other parts of Lower Mainland in the next five years. Leung said he is really grateful that the restaurant is doing well and he believes the reason customers keep coming back is because of the quality of the food. He and his crew ensure their product is fresh and prepared from scratch. Also, Leung added, each chef specializes in one protein.

“We rather have one person focus on one task than having one person doing a lot of things,” Leung said. “When the restaurant gets too busy, I will help out wherever needed.”

As the owner’s son, it could be perceived that Leung was simply handed the job as manager. But Leung is clear that he earned his position.

“I’m a competitive person. I want to earn my status instead of have it given to me,” Leung said. In order to earn the respect of other staff members, Leung clean the ovens, put out the garbage and chop in the kitchen.

“I’m everywhere. From managing to helping in the kitchen. I usually spend half of my day chopping,” he added.

Watch Seth Rogen eat his way around Vancouver on celeb chef's new Netflix show
Oct 10, 2019 2:25 PM
Comments
We welcome your feedback and encourage you to share your thoughts. We ask that you be respectful of others and their points of view, refrain from personal attacks and stay on topic. To learn about our commenting policies and how we moderate, please read our Community Guidelines.