Years ago I was introduced to okonomiyaki at the Eatery in Kits. Some say it's a Japanese Pizza, but there is already a Japanese pizza out there...and it has mayo and corn on it.
Jef Choy Feb 14, 2009 3:41 AM

Years ago I was introduced to okonomiyaki at the Eatery in Kits.  Some say it's a Japanese Pizza, but there is already a Japanese pizza out there...and it has mayo and corn on it.  To me, Oknomiyaki is more like a savoury pancake, but it does have all sorts of toppings like a pizza or an omlette.  While Vancouver has tons of Japanese restaurants, we know they primarily serve sushi.  There are a handful of places that make Okonomiyaki (comment on your favourites!) but after a couple days of my all pancake diet, I thought I'd share with you how to make one.  They are great if you have left overs or even make your own okonomiyaki party!  To me they are a perfect Vancouver dish because you can put pretty much anything into them, whoah..it's like 'fusion!'.....no....it isn't.... 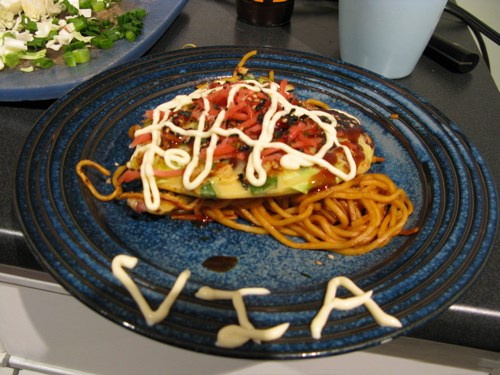 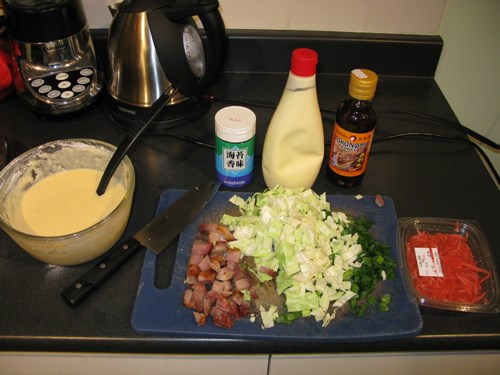 Stuff to put inside: cabbage is the only one you really need, after that, veggies: green onion, onion, peppers, mushrooms, meat: pork (i used bbq pork in this case), chicken seafood: shrimp, octopus, crab.... others: mochi, cheese!

1. heat up the grill less to than medium heat (4ish).  Use whatever you'd use for pancakes, I use a teflon pan.

2. Mix together your batter, shouldn't be too lumpy.

3.  Put one scoop of batter into small bowl, mix in your veggies and/or meat, the put on the grill.  Some people cook the veggies separate, I like to mix it up.  It'll take awhile to cook because the grill isn't that hot but it should cook it most of the way through.  Eventually like a pancake you flip it and cook the other side.  Don't be like ADD me who gets all wound up and flips it before it's done...it'll just get all over the place and you'll be really embarrassed when someone hears you whimper...'I can't even make a f**king PANCAKE!' 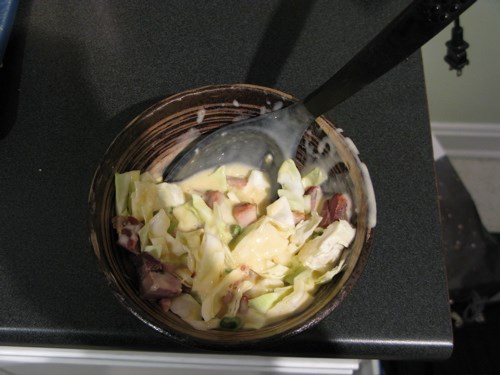 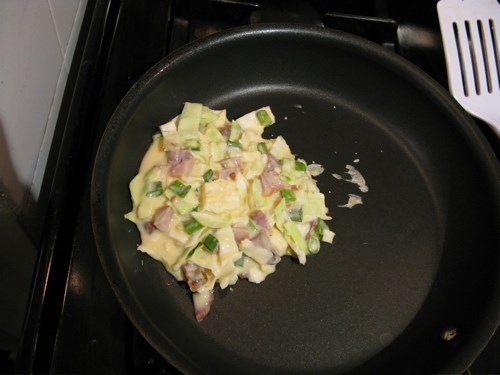 4. I like doing mine w. noodles too, in this case I cooked 'em on the side w. okonomiyaki or yakisoba sauce, some people even pour the batter right on the noodles so they are cooked right in. 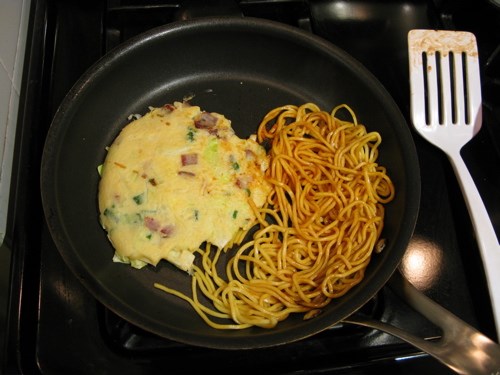 5. Once it's done cooking put your toppings on.  The most important part of this is spraying around the mayo into some sort of pattern and then sprinkling it w. seaweed.

The great thing about this dish is that you can really mess with it.  I know...all you want to do is put soy sauce on your rice right?  No go...but to put italian sausage in your okonomiyaki...hmmm....go nuts....